Vegan Mushroom Gravy is an easy from scratch homemade brown gravy recipe made with mushrooms, onion, and garlic. Make it ahead of time to reduce stress for Thanksgiving, Christmas, and Easter. 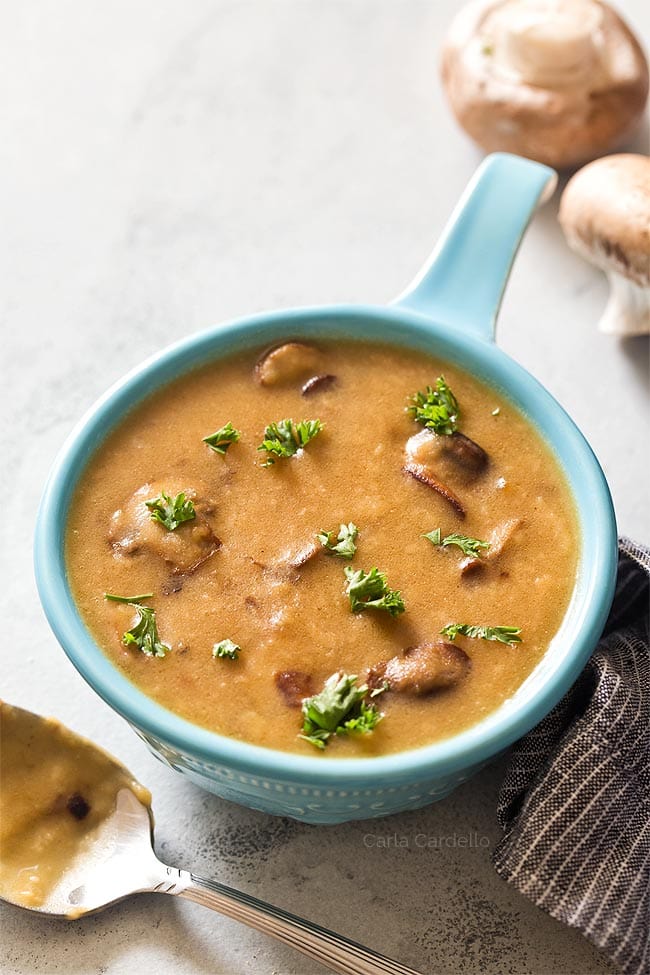 I always have a pack in my fridge, usually white button. I add them to soups, sauces, sausage mushroom pasta, even my steak fajitas.

When I go to the Asian markets, I usually end up with shiitake for my tomato mushroom pasta, hen of the woods, or beech. Sometimes all three.

Since my Gravy Without Drippings and Gravy From Drippings are so popular, I knew I had to work on Vegan Mushroom Gravy next.

Now before you run away from the V word, all the ingredients are pantry-friendly. It simply means I’m using olive oil instead of butter and vegetable stock instead of chicken.

You have stuffed butternut squash for the main dish. Mashed Potatoes For Two, Green Beans With Almonds, and Homemade Cranberry Sauce for the side dishes.

In order to make this vegan mushroom gravy recipe the most flavorful and best gravy ever from scratch, I used baby bella mushrooms (sometimes referred to as cremini), onion, and garlic.

Brown mushrooms add a more robust umami flavor to your vegan gravy. Baby bellas can be found at most supermarkets, but feel free to mix and match your favorite varieties.

You can also use white button mushrooms as well. It’ll be a bit lighter in terms of flavor but still delicious.

Although this easy mushroom gravy is vegan as written, it’s flexible enough to serve with both meat and vegetable.

Serve it with your lamb chop dinner, stuffed Cornish hen, or pork chops with mushroom gravy. 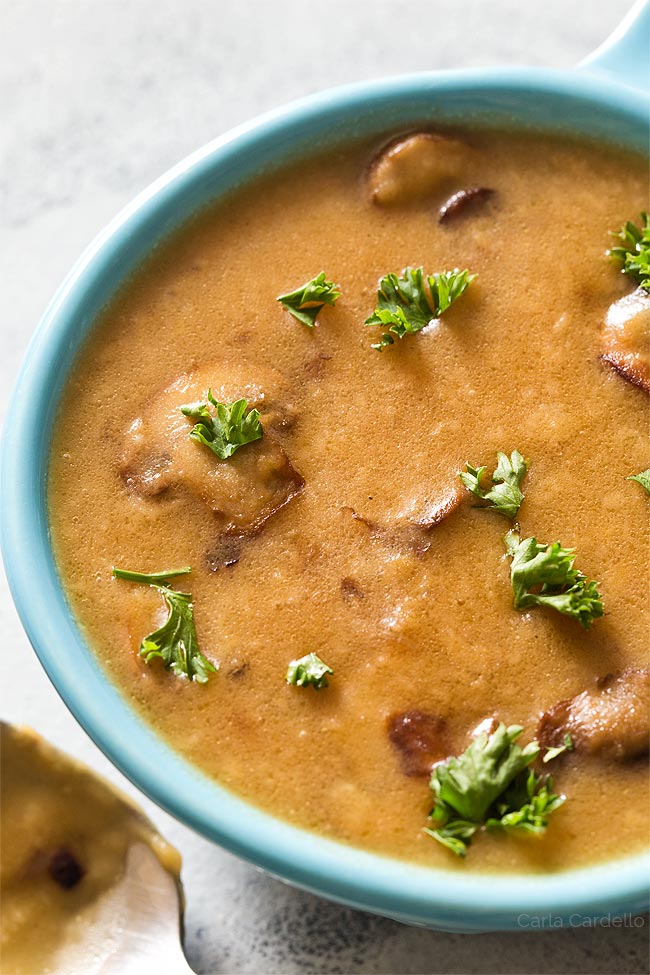 What is mushroom gravy made of?

The ingredients for vegan mushroom gravy are: 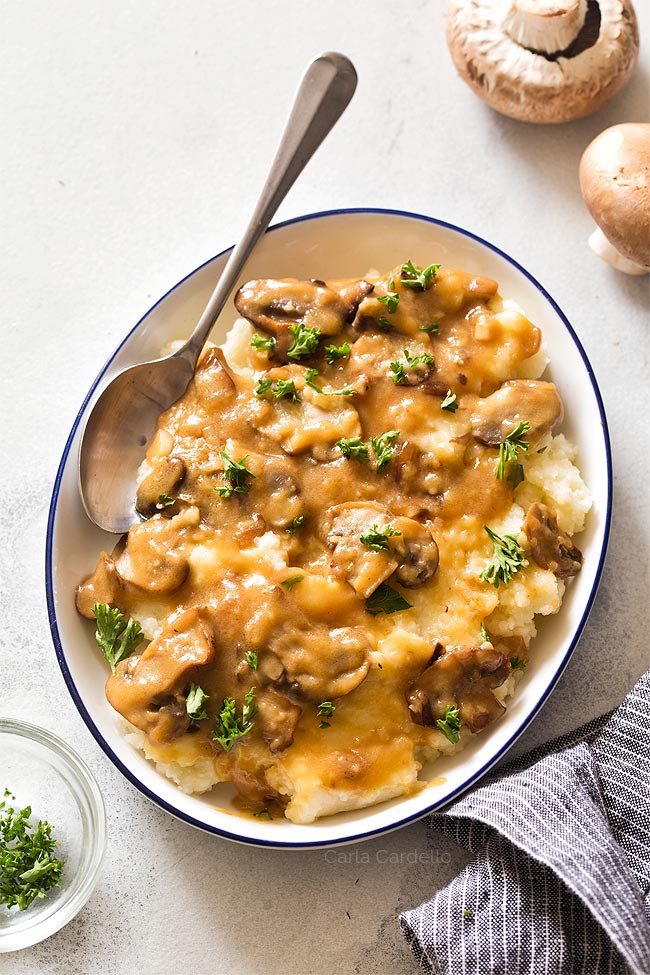 How To Make Mushroom Gravy

To make vegan mushroom gravy with flour, first heat your oil in a large skillet. Once hot, add your mushrooms, onion, and a big pinch of salt.

Cook until the moisture is cooked out of your mushrooms and onion and they start to brown, about 10 minutes or so.

Once they’re done, add your garlic and cook 1-2 minutes. Then stir in your flour to create a roux.

Next, slowly whisk in your broth, smoothing out the roux as much as possible. Bring to a boil then cook until it thickens, roughly 3-5 minutes.

The gravy will thicken as it cools, so I like to pull mine off the heat early. However, if your gravy is too thick, stir in more broth to thin it out.

How To Make Mushroom Gravy Without Flour

Looking to make a gluten free vegan gravy without flour? Use cornstarch instead to thicken your gravy.

However, cornstarch is not a 1:1 substitute. Use half the amount, which means 1 tablespoon cornstarch instead of 2 tablespoons flour.

Instead of making a roux, stir the cornstarch with some of the broth until a slurry forms then add it to the pan with the rest of the broth. 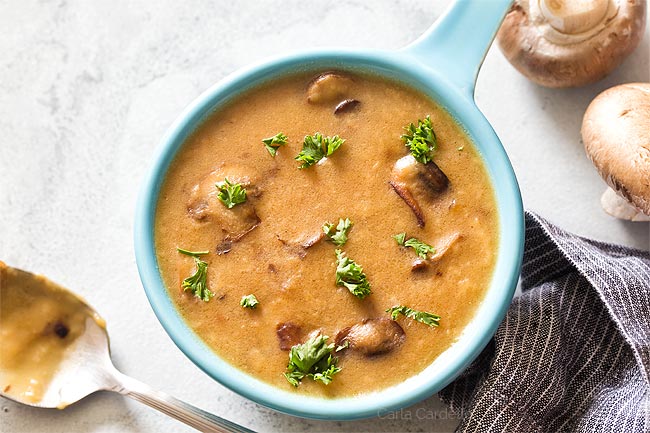 How To Make Vegan Mushroom Gravy Ahead Of Time

The best part about making this easy vegan mushroom gravy recipe is you do not have to wait until your dinner is done cooking to make the gravy.

Most dinners have you waiting for the meat to finish so you can use the drippings.

Well with vegan gravy, there are no meat drippings to wait for!

When there’s about 15 minutes left before dinner is done, I start the gravy. That way when everything is ready, the gravy is ready too.

However, you can certainly save time (and sanity) and make mushroom gravy the day before and refrigerate

It will thicken greatly when cold so right before serving, reheat it in a saucepan or skillet until smooth and pourable again. You will likely need to stir in more broth to thin it out. 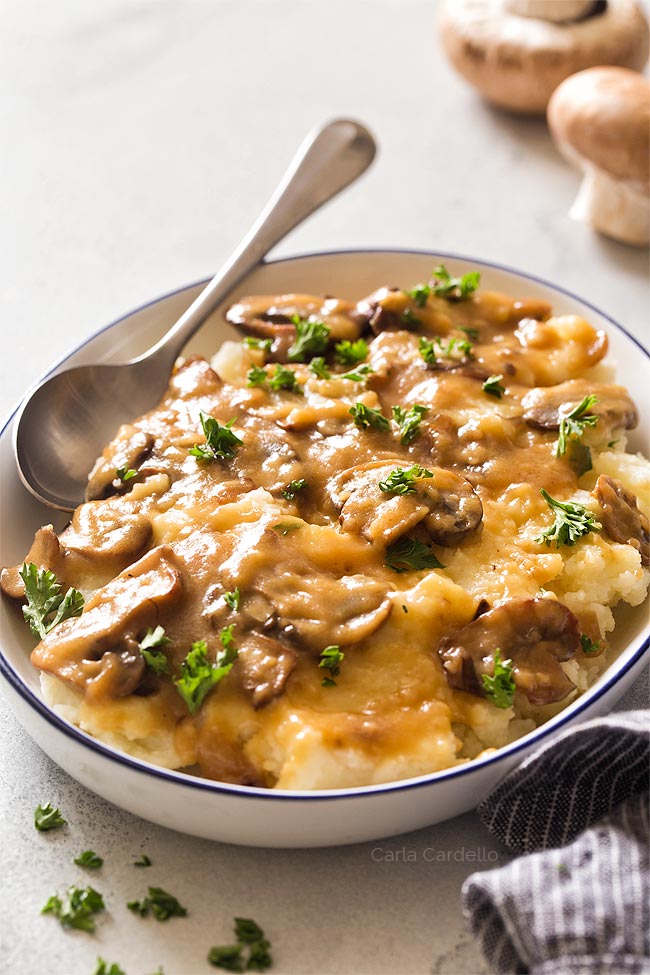 What To Serve With Mushroom Gravy

Now that you made the best vegan gravy recipe, what do you serve with it? Here are some ideas:

Note: Not all recipes are vegan