Creamy Sausage Mushroom Pasta with rigatoni and a creamy white Alfredo sauce is a hearty and comforting dinner for two. Serve it with a side salad for a complete meal. 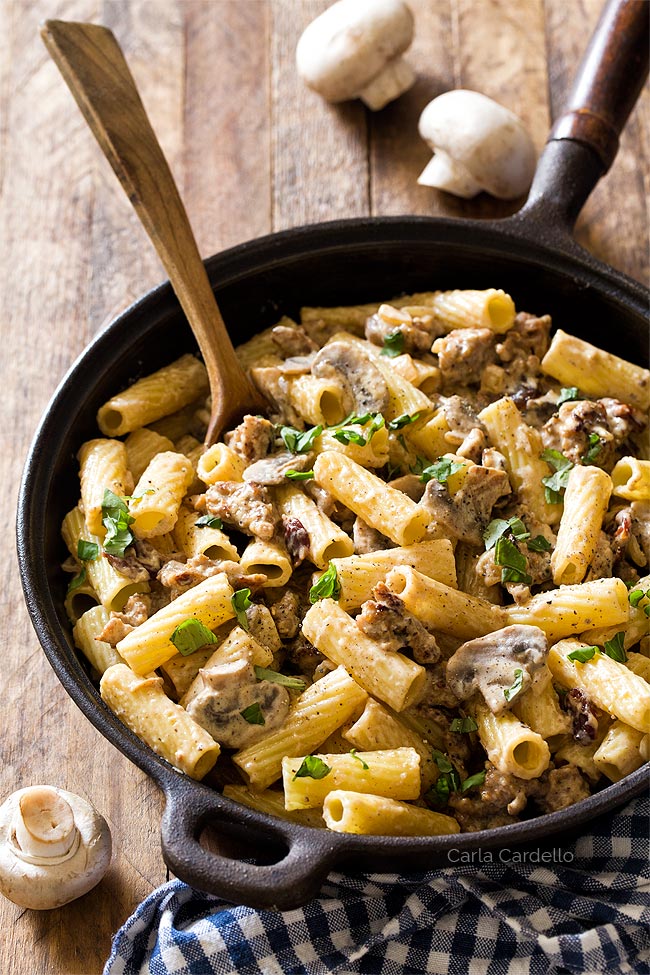 Disclosure: This post is sponsored by Walmart. All thoughts and opinions are my own.

Hello there! It’s been a minute since I last posted a brand new recipe. I promise it’s for a good reason.

If you didn’t hear the news through my email list, I’ve been working on launching a new business. It’s not related to food but still hope you’re interested.

And I promise this is the only time I’ll mention it here. I know you only want recipes from me and nothing else.

When I’m not shooting food, I’m out capturing the streets and bridges of Pittsburgh. I decided to take those photos and officially launch City Life Adventures where you can buy my photos as prints, magnets, coasters, and more.

I can also print food photos by special request to decorate your kitchen.

Don’t worry – I’m not giving up food! In fact, I came back today to share this brand new dinner for two recipe with you: Creamy Sausage Mushroom Pasta with rigatoni in a white cream sauce.

Because I’ve been so busy launching my new business, I couldn’t spend too much time cooking dinner. As tempting as it is to throw a frozen pizza in the oven and call it a day, that wasn’t going to work every night for two months.

That’s when having quick dinner ideas come in handy.

When you’ve been cooking for as long as I have, you memorize certain formulas, such as how to make a quick pasta sauce.

With this knowledge, I can look at what I have on hand and come up with a hearty and comforting dinner in under an hour.

Here I made a creamy Alfredo sauce with sausage, mushrooms, onion, and garlic. Then I tossed it with some rigatoni.

Serve it alongside a salad or roasted vegetables to make it a complete meal. 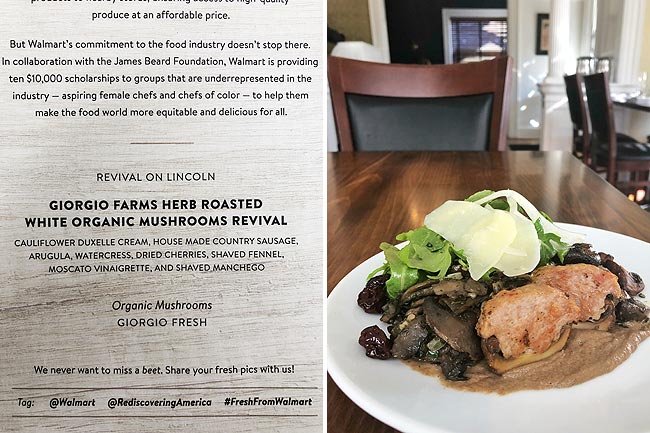 This creamy sausage and mushroom rigatoni recipe was inspired by a dish I ate at a local Pittsburgh restaurant called Revival On Lincoln.

Their chef Jamie Sola along with eight other chefs across the U.S. teamed up with Walmart in a program called Rediscovering America.

I was invited to try Jamie’s recipe in person then create my own recipe featuring Giorgio Farms white button mushrooms. He made sausage stuffed mushrooms with a mushroom cauliflower puree and roasted mushrooms with dried cherries.

It’s amazing how something so simple can be cooked in multiple ways for the same dish.

Because his recipe was a little small for a full meal, I decided to take some of the ingredients – the mushrooms, sausage, and dried cherries – and turn them into a hearty pasta dinner for two.

Ready to start cooking? Check out Walmart’s online grocery service so you can get all your groceries ready curbside. 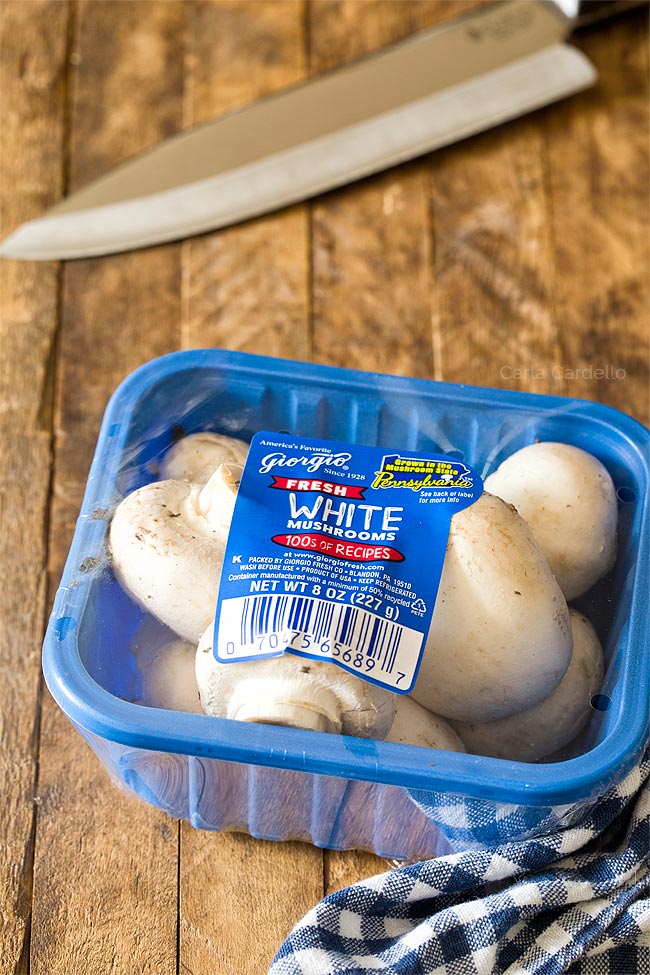 How To Cook Sausage Mushroom Pasta

There are two parts to making this dinner for two recipe: Cooking the pasta then making the sauce.

First, bring a large pot of water to a boil. Don’t add salt just yet because if you get distracted and the water reduces, it may become too salty.

Once the water comes to a rolling boil, add a handful of salt (preferably kosher but table salt works too) then the pasta. Cook until al dente.

While the pasta is cooking, you can practice your time management skills by making the sauce. 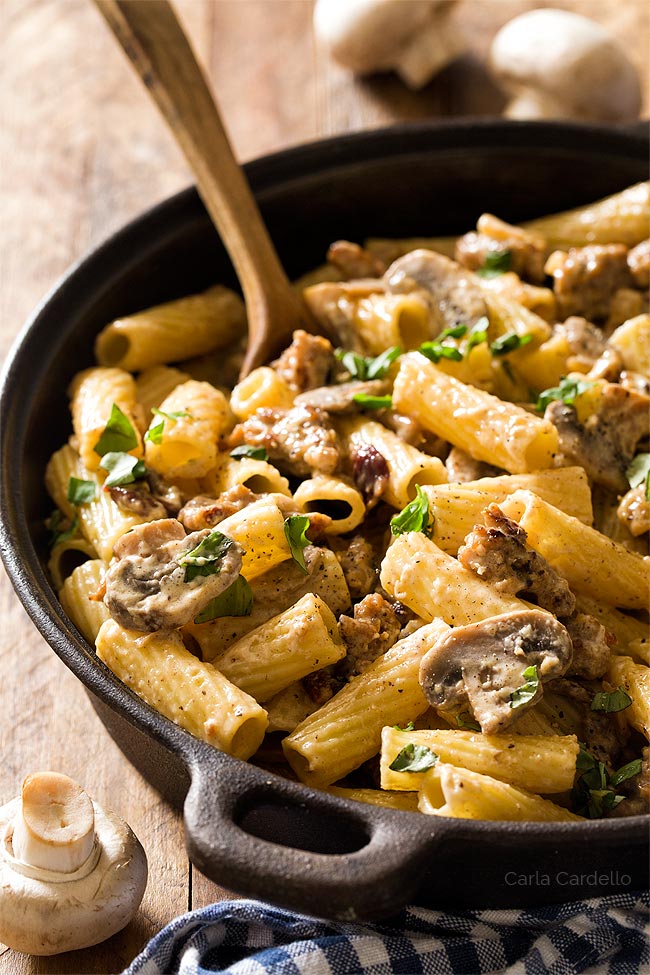 Which sausage should I buy?

When choosing which sausage to buy for rigatoni, look for Italian sausage.

You can often buy it ground in a package. However, if all you see are links, you can squeeze the meat out of the casings. 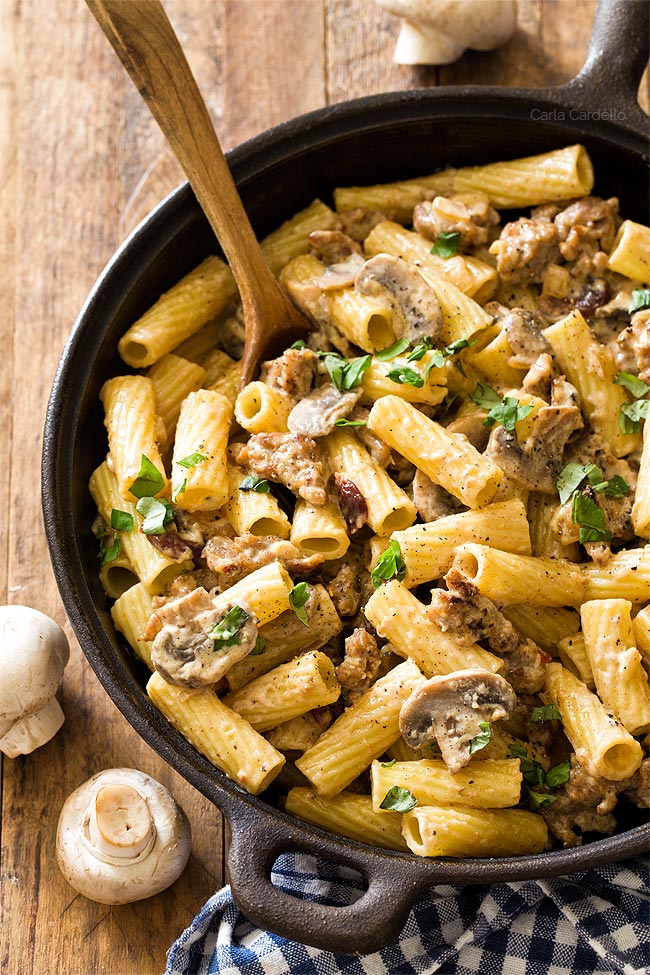 Which pasta should I use?

I chose rigatoni because the grooves on the pasta hold the sauce more efficiently. You can also use penne or even medium shells, anything that will catch and hold the sauce.

You don’t often see dried cherries in dinner recipes, but they were a surprisingly nice touch with mushrooms and cream.

They add a small burst of sweetness, which helps balance out all of the savoriness. There’s a reason everyone says opposites attract!

Typically you would rehydrate dried cherries ahead of time, but I saved time and plumped them up by cooking them in the cream sauce.

I promise they taste good, but if you’re a bit skeptical you don’t have to add them. 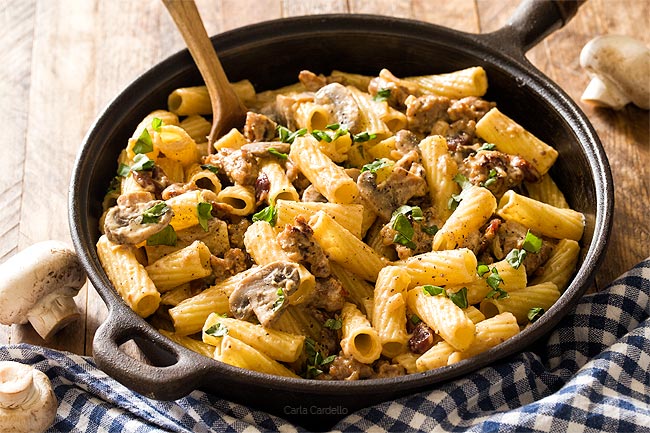 Since you’ll have leftover mushrooms in the package, here are more mushroom recipe ideas:

Disclosure: This post is sponsored by Walmart. Thank you for supporting me and the companies I work with as sponsored posts help pay for website hosting and groceries.