Homemade Pan Gravy With Drippings is an easy from scratch gravy recipe made with pan drippings so you can make a delicious sauce for your roasted meat. Make it for Sunday Supper or for Thanksgiving and Christmas dinner.

The whole foundation of my blog is to make recipes from scratch. That means no packets or mixes.

When I see someone use a gravy packet, I die a little inside. Don’t they know how ridiculously easy it is to make homemade gravy?!

Many of you agree because my Homemade Gravy Without Drippings and Vegan Mushroom Gravy are popular.

However, what do you do when you DO have meat drippings?

Luckily for you, I’m sharing my go-to Homemade Pan Gravy With Drippings recipe.

When I made my Pork Roast For Two recipe recently, I had drippings leftover in the pan.

Being the resourceful cook I am, I made some delicious small batch pan gravy.

Rather than trying to cram all of my knowledge about making gravy into one long post, I decided to post the gravy recipe on its own.

This guide is helpful for those who find themselves with meat drippings leftover and wondering what to do with them. You know you shouldn’t throw it away but don’t know where to begin.

Or maybe your recipe tells you how to roast your meat but doesn’t tell you how to make gravy. Now you’re on the internet looking for a recipe, which brought you here.

Whatever the reason, I got you covered on making gravy from scratch with drippings. 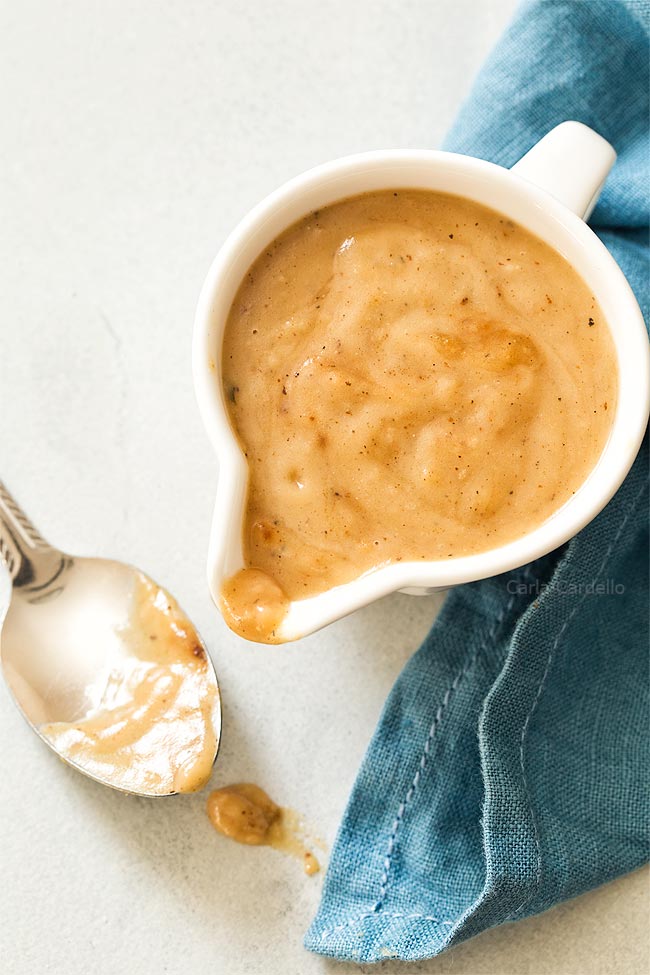 What is pan gravy?

Pan gravy is a sauce made from meat drippings left behind in the pan. Drippings refer to the seasoned but not thickened juices extracted from the roasted meat.

You don’t want to throw away these fat drippings because there is so much flavor in them.

When you think of gravy, you often think about turkey drippings like with my Stuffed Turkey For Two, but you can also have chicken, beef, and pork drippings.

How do you make the best gravy from scratch with drippings?

The best way to make homemade gravy is to make it directly in the roasting pan. This allows you to scrape up all the good brown bits left behind from the meat, known as fond.

This means placing the roasting pan directly on your stovetop burner. Use a wooden spoon or rubber spatula so you don’t scratch up the bottom of your pan.

If for whatever reason you don’t want to heat your roasting pan on the stove, you can transfer everything to a saucepan and make it in there.

How do you separate fat from gravy?

Normally if you have a large amount of drippings, you want to separate the fat before making gravy.

You can do this by transferring the drippings to a measuring cup and let sit for about 10-15 minutes or until the fat rises to the top. Skim off the fat with a spoon.

You can then add this fat to your pan for the base of your gravy. Add enough butter to equal the amount of fat called for in the recipe.

Since I focus on recipes for two, sometimes the amount of drippings is small.

Take my Pork Roast For Two for example. I had about a tablespoon or so of drippings left in the pan. With an amount so small, I didn’t skim off the fat. Instead, I added everything to the pan and added some butter.

Had I been making a larger meal, such as turkey for Thanksgiving, then I would take the time to skim off excess fat from the drippings. 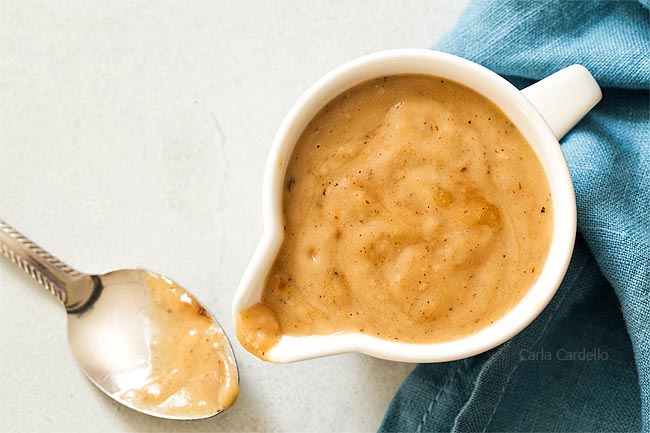 How do you thicken pan drippings for gravy?

There are multiple ways to thicken pan drippings, but the two I’m going to talk about are with all-purpose flour and with cornstarch.

How to make gravy with flour

Using flour to thicken gravy is the easiest and most traditional way.

Thickening a sauce with flour involves making a roux. A roux is stirring together equal parts flour and melted fat to make a paste.

It’s then cooked long enough to get rid of the raw flour taste. Some recipes have you cook it longer to caramelize and create a blonde or brown roux, but for gravy you’re going to make a white roux.

After it’s cooked, slowly stir in your broth then bring to a boil, stirring often to smooth out the lumps.

Once it starts boiling, the thickening power of the roux is activated, creating an easy sauce for your meat.

Remove it from the heat then stir in the milk. At this point it’s very important to taste and adjust for salt.

The amount of salt to add heavily depends on how salty the meat drippings and broth are plus what type of salt you’re using, which is why I can’t give an exact amount.

I personally add about 1/4 teaspoon kosher salt. If you’re using table salt, the crystals are smaller so you may not need as much.

How to make gravy with cornstarch

Sometimes you don’t want to make gravy with flour. Perhaps you are looking to make a gluten free gravy.

You can easily make gravy using cornstarch, but the process is slightly different than using flour.

Instead of making a roux, you make a quick slurry of water and cornstarch. Stirring in a slurry ensures your gravy isn’t lumpy.

If you added dry cornstarch the same way you do with flour, you’d be left with lumps.

Stir the slurry into the hot fat then stir in the broth. Bring to a boil. Once it starts boiling, the gravy should thicken up.

Remove it from the heat then stir in the milk. Taste and adjust for salt.