Pork Chops with Mushroom Gravy is an easy pork chop recipe smothered in a homemade mushroom gravy made without canned soup. Make it as a delicious dinner for two! 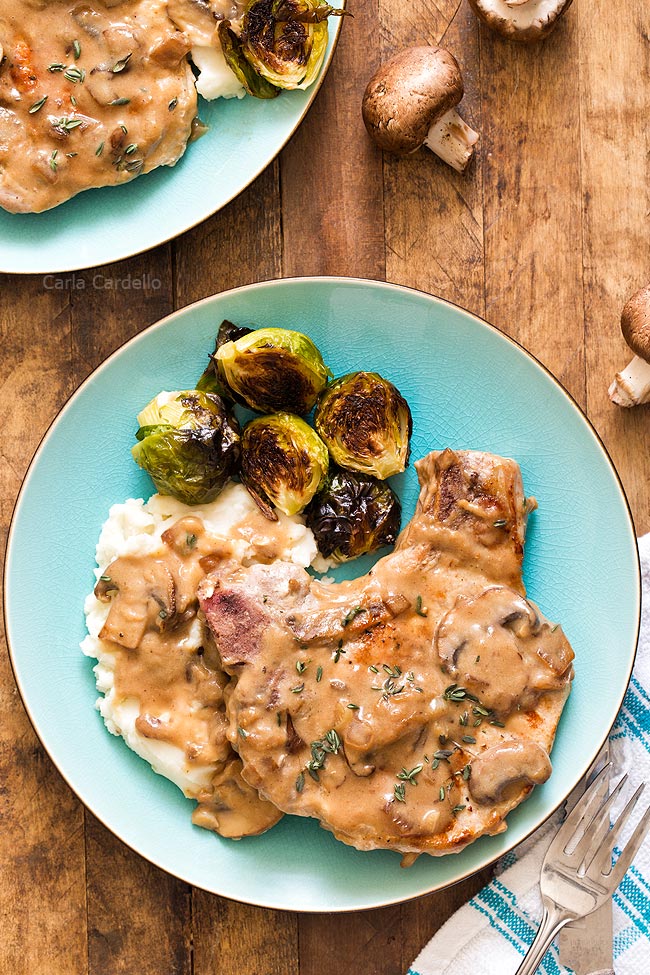 For the longest time I hated pork chops.

Turns out I hated dried out, tough pork chops. The kind my parents would always overcook for me as a kid.

It wasn’t until recently I discovered a new love for pork. This past January I took a long break from work and focused on cooking from my cookbooks.

Even though I cook every day, it wasn’t feeling fun anymore. Mostly because I was rushing to get through dinner to work on my next task and not actually enjoying it.

One of my cookbooks had a recipe for spice-rubbed pork chops. Normally I would skip right over this, but for some reason it looked really good.

I’m so glad I had an open mind because it showed me just how great pan fried pork chops really should be.

Now I didn’t want to fully copy that recipe for today’s post, so what else I could bring to the table? That’s when I thought about Pork Chops with Mushroom Gravy.

Serve with mashed potatoes for two and roasted Brussels sprouts with balsamic for a complete pork chop dinner for two. 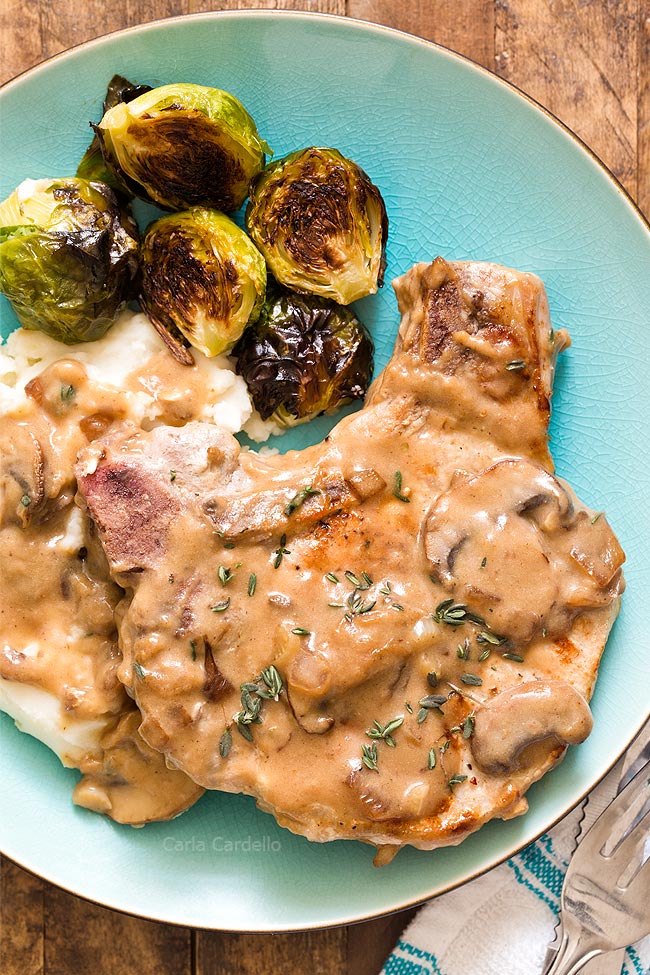 How many servings does this pork chop recipe make?

I call this pork chops for two because it makes enough food for 2 people.

This is where I struggled a little bit with serving size. I found making 2 thin cut chops wasn’t enough as I was still hungry after eating 1 chop, even with Brussels sprouts and mashed potatoes.

However, 2 thick cut chops were plenty because there’s more meat.

I think this is a case of knowing your audience. If you’re serving someone with a large appetite, you may want to make 4 thin chops.

But if you’re serving someone who isn’t the biggest meat eater, you may find 2 thin chops to be plenty. 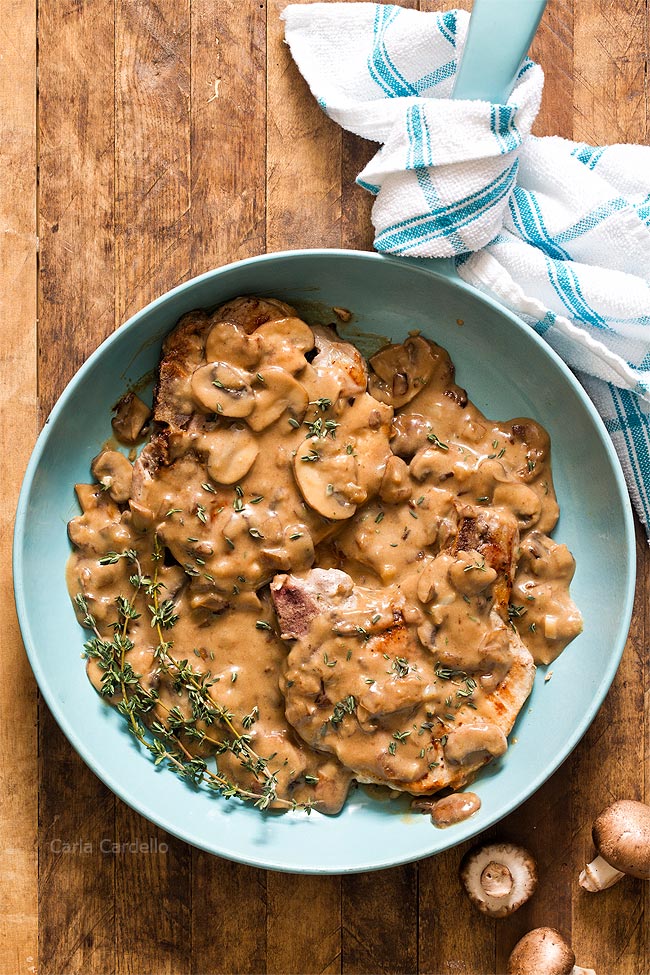 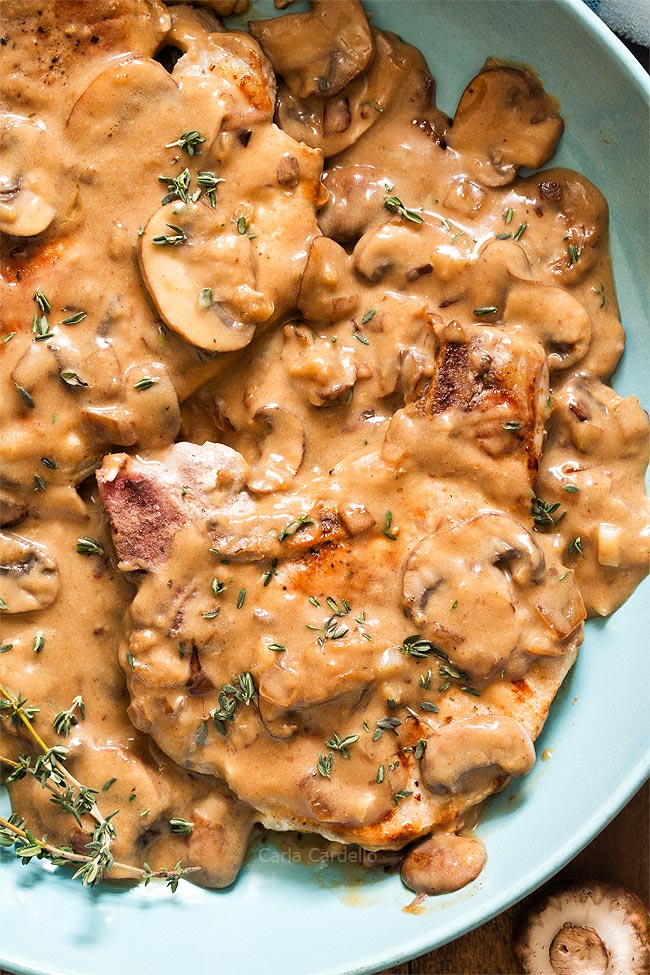 Which cut of pork should I use?

As the recipe name implies, you’ll be choosing pork chops, which come from the loin that runs from the pig’s hip to shoulder.

However, you have two choices to make:

This pork chops with mushroom gravy recipe works with either cut, so I provided instructions on how to cook both.

I prefer bone-in thin cut because there is much more flavor from the fat and bone. Plus thin cut cooks faster than thick cut.

However, some people prefer thick cut because there’s more meat to eat. They do take a little longer to cook, but the method is still the same. 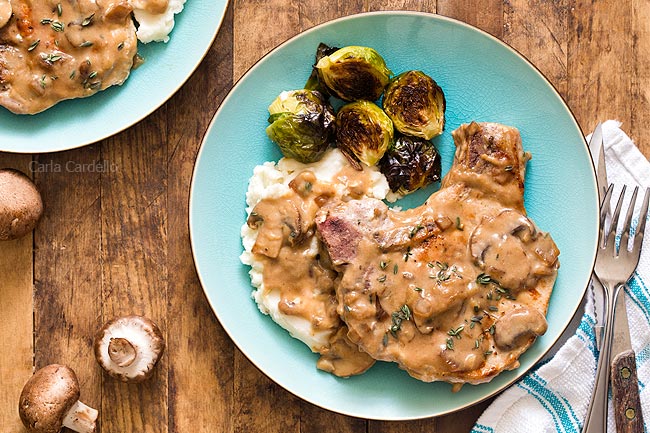 How To Make Pork Chops with Mushroom Gravy

Once hot, season your chops with salt and pepper then add in a single layer to your skillet, making sure none of the pork is touching each other.

Cook for 4 minutes then flip and cook until the internal temperature reaches 145F degrees. The time will vary based on whether they’re bone-in vs. boneless and thin vs. thick.

For thick chops, you will need to finish cooking them in a 425F degree oven. That’s to ensure the middle is cooked properly without burning the outside.

Finish cooking your thick chops in the oven for 6-8 minutes or until the middle reaches 145F.

Transfer your pork chops to a plate and keep warm while you make the gravy.

How To Make Mushroom Gravy

Of course I don’t have to tell you this version isn’t vegan LOL But it’s the exact method but using butter, chicken broth, and cream.

Once you transfer the pork chops to a plate, add the butter to the skillet, scraping up any brown bits left behind. These will add extra flavor to your gravy, so don’t skip them!

After the butter melts, add your mushrooms, onion, and a big pinch of salt. Cook until the moisture is cooked out of the mushrooms and they start to brown.

Once they’re done, add your garlic then stir in your flour to create a roux (flour paste).

Next, slowly whisk in your broth, smoothing out the roux as much as possible. Bring to a boil then cook until it starts to thicken. Stir in your cream, thyme, and mustard then taste and adjust for seasoning.

The mushroom gravy will thicken as it cools, so I like to pull mine off the heat early. However, if it gets too thick, stir in more broth to thin it out.

Why are my pork chops tough?

The number one reason most people, including myself, hated pork chops growing up is we often overcook pork chops until they’re tough and dried out.

Cook your pork until the internal temperature reaches 145F degrees then let them rest while you make the gravy.

What To Serve With Pork Chops With Mushroom Gravy

Skillet pork chops on their own aren’t a full meal, so you’ll need some sides! As I mentioned earlier, I served mine with mashed potatoes and Brussels sprouts.

You can also make green beans with almonds or lemon Parmesan broccoli.

Looking for more romantic dinners for two? Check out these easy meal ideas: