Tired of leftover mashed potatoes? Learn how to scale them down with creamy Garlic Mashed Potatoes For Two plus how to make the best mashed potatoes without being gummy. 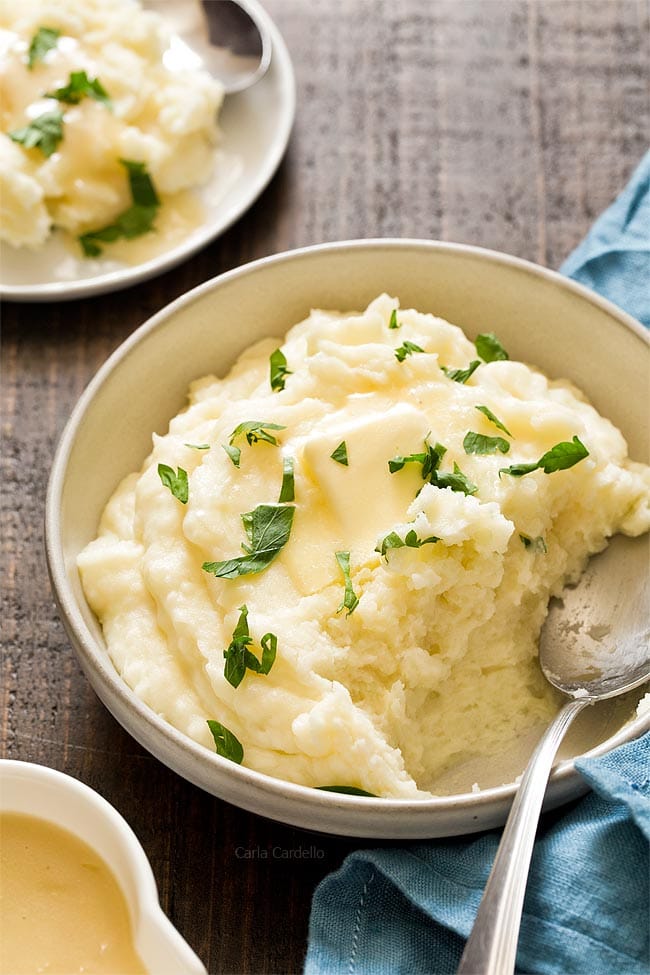 One question I often get with small batch cooking – how do you make mashed potatoes for two?

It’s like spaghetti. Either you make too much or not enough.

Luckily for you, I figured out the correct proportion of ingredients, including how many lbs. potato per person.

These Garlic Mashed Potatoes For Two is your everyday mashed potatoes recipe made with Russet potatoes, milk, and butter then served with Homemade Gravy Without Drippings.

It’s hard to portray in the photos how many servings this mashed potatoes for two recipe makes (I mean, one large bowl does look like one serving), but it makes about 4 servings.

That’s about two helpings per person (because who only eats one helping?)

However, if you’re cooking Thanksgiving Dinner For Two or Christmas Dinner For Two, you can stretch out the servings (plus you need to save room for small pumpkin pie and small pecan pie).

This mashed potatoes recipe for two is from 2008. That means I’ve been making this recipe for a really long time now. Talk about tried and true!

Some of you have been complaining my posts are too long, but truth is there is a lot of info to share. I wish I could condense it down, but sometimes it is what it is.

If it’s too much to read (maybe you need to make mashed potatoes RIGHT NOW for dinner), you can scroll straight to the bottom for the recipe.

I can’t include all of my tips in the recipe card; hence the long post. But I will try my best! 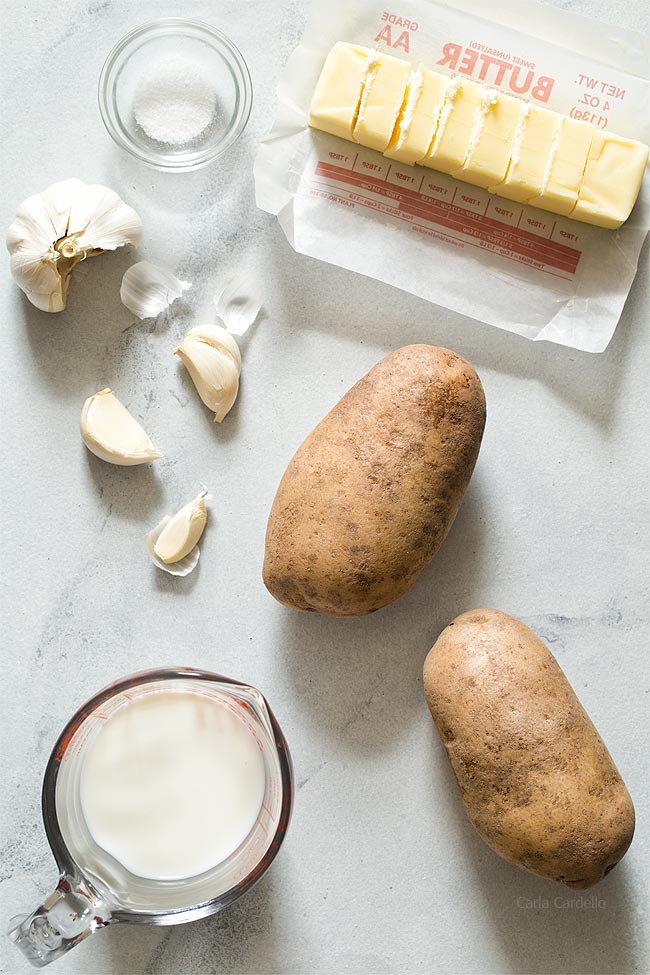 Ingredients For Mashed Potatoes For Two

That’s about 1/2 lb potato per person. If you want to make single serving mashed potatoes, just cut my recipe in half.

Because potatoes vary greatly in size, I highly recommend weighing them with a digital scale. You’d be surprised at what 1 pound potatoes looks like. 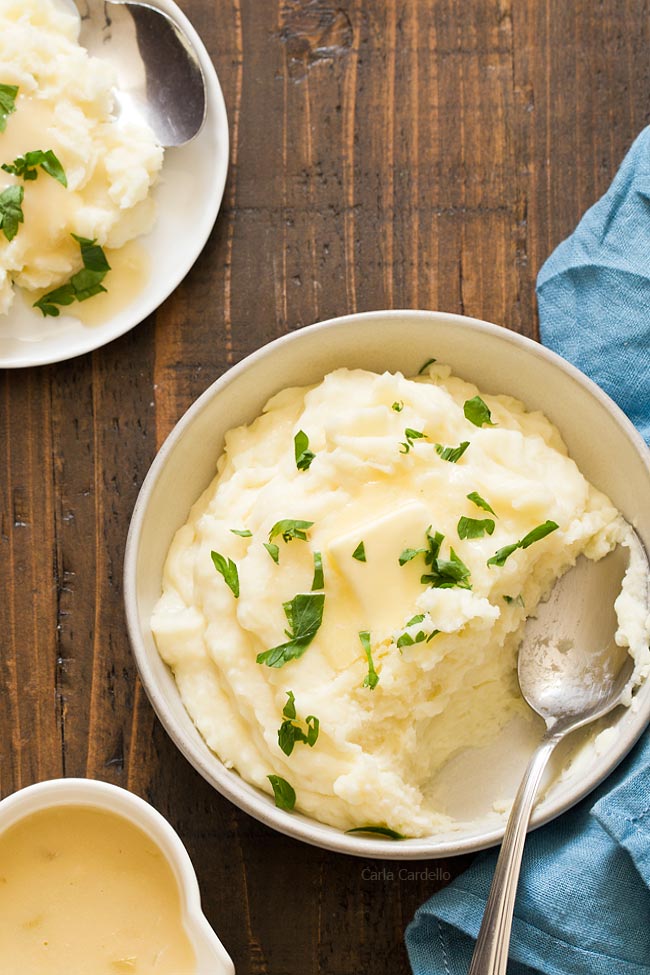 How To Make Mashed Potatoes For Two

First, add your potatoes to your pot before bringing to a boil.

The reason you add potatoes to your pot then fill with cold water and bring to a boil rather than adding potatoes to boiling water is to evenly cook the potatoes.

If you add potatoes to boiling water, the outside will overcook while the inside won’t cook enough. You want both the water and the potatoes to come to temperature at the same time.

Don’t forget to salt your water! The potatoes will absorb the salt as they cook, resulting in not bland potatoes. I usually add about a handful of kosher salt.

Once boiling, turn your heat down to a simmer. Cook for about 8-10 minutes or until fork tender.

Rolling boiling water will move the potatoes around too fast, resulting in disintegrated potatoes. Simmering means the water won’t move as fast but still be hot enough to cook them through.

Drain and let your potatoes dry for about 5 minutes. If you transfer them straight to the bowl without drying, you’ll end up with watery mashed potatoes.

Next, mash by hand or your lowest setting on your mixer.

For the fluffiest mashed potatoes, mash using a potato ricer or a hand masher.

However, I’m lazy and will often use my stand mixer on the lowest setting. If you go this route, you need to be gentle and not overmash.

Overmashing will result in a gluey and gummy texture.

You should still get creamy garlic mashed potatoes, but sometimes I’ll leave it on the slightly chunky side in order to not accidentally overmash. 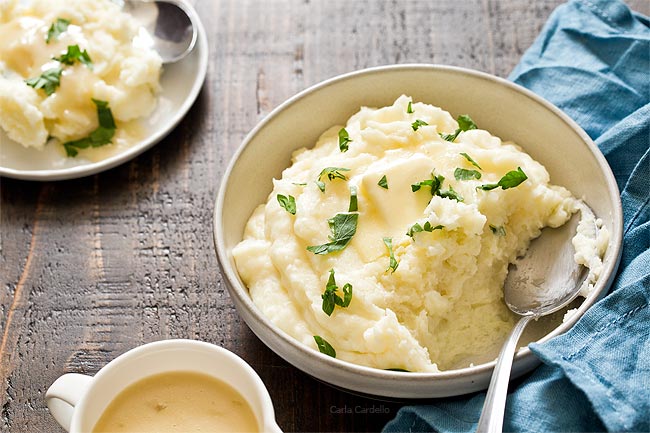 How To Thicken Mashed Potatoes

If you accidentally added too much milk, don’t fret! To thicken mashed potatoes, put them in a dry pot and cook over low heat until they start to dry out, stirring often so they don’t burn.

How To Keep Mashed Potatoes Warm

Don’t you hate it when your timing is off and by the time you finish cooking dinner, your mashed potatoes are too cold to serve?

Luckily there are several ways to keep mashed potatoes warm until ready to serve.

If you only need to keep them warm for 15-20 minutes, usually a dish towel covering the bowl keeps in enough heat.

However, if you need to keep them warm longer, say an hour or so, set the (heatproof) bowl of mashed potatoes over a pot of simmering water (like a makeshift double boiler), cover it with a dish towel, and stir every 15 minutes or so. 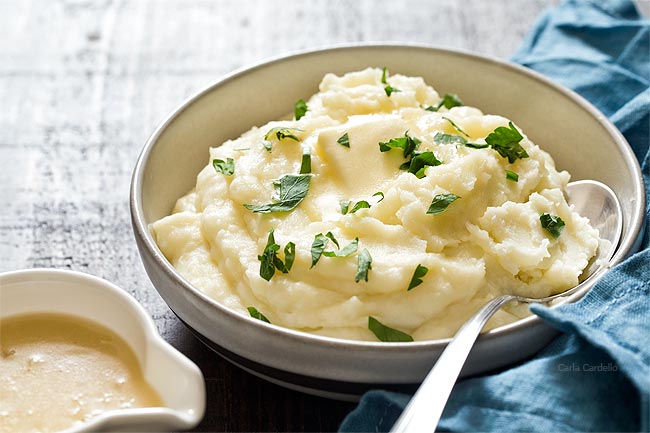 Recipes To Serve With Mashed Potatoes

Now that you made mashed potatoes for 2, here are some recipes to serve with it: