This easy crustless Eggless Pumpkin Pie without evaporated milk is baked in two ramekins so you can have your pie without leftovers. Gluten free dessert for two. 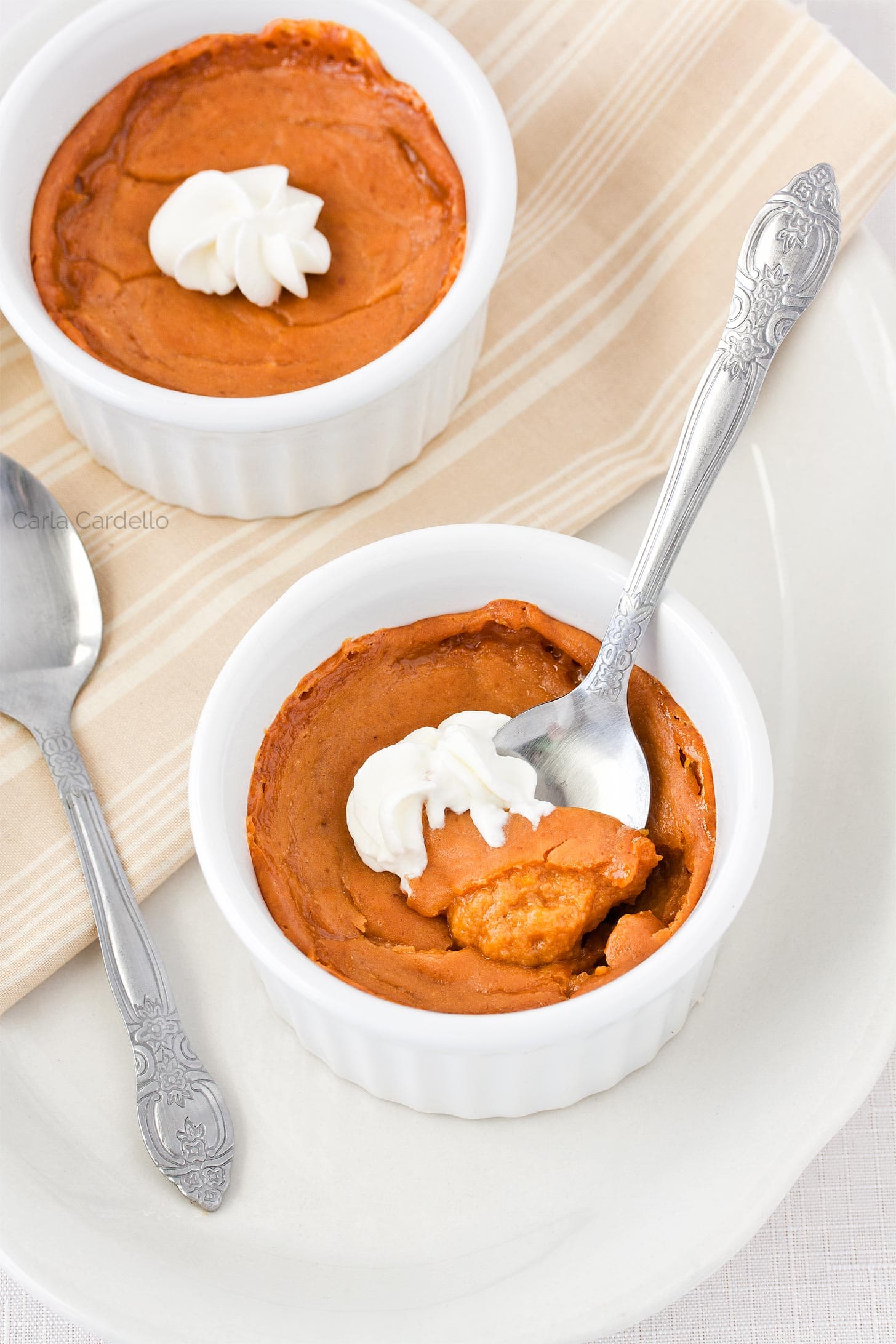 Small batch baking and dessert for two recipes are something I know well because of experience.

Truth is I’ve been cooking for myself since 2007 (minus when my parents and brother visit).

I never thought much of it until I was at my first big girl job after college from 2010-2014 where everyone who worked there had a family to feed.

They also thought I drove 2.5 hours home to my parents every single weekend like I’m back in college.

Funny how lifestyles can vary so much. I may have felt alone at my previous job, but I know you’re reading this right now because you, too, bake for 1-2 people.

Sure, Thanksgiving is about family get togethers, but the thing is not everyone has a huge family.

That’s why I wrote my Thanksgiving Dinner For Two post so you can still cook a traditional dinner at a much smaller scale.

Or perhaps travel plans didn’t work out this year and not everybody will be eating holiday dinner together.

Even if you do host a large Thanksgiving dinner, I’ve heard from multiple readers they make my Eggless Pumpkin Pie in ramekins because someone in their family has food allergies.

Whatever the reason, I got you covered with my gluten free pumpkin pie without eggs.

I took the traditional pumpkin pie recipe and scaled it down into pumpkin pie for two. Then I substituted cornstarch for the egg.

I also skipped the pie crust as I felt it wasn’t necessary for pumpkin pie ramekins (but I do provide options if crust is your favorite part). 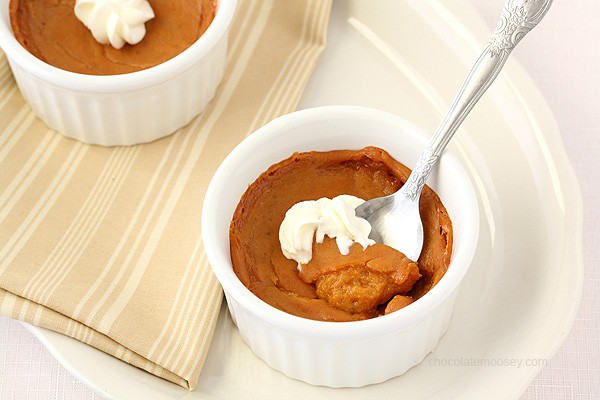 Looking for more egg free desserts? Check out my full list of Eggless Desserts for two.

What can I substitute for evaporated milk in pumpkin pie?

Every pumpkin pie recipe calls for evaporated milk. However, opening a can for a small amount can be annoying.

Luckily, you can substitute heavy cream and whole milk for evaporated milk. This combination ensures there’s enough milk fat in the filling.

Chances are if you’re like me, you have them in your fridge anyway.

Of course if the reverse is true and you do want to use evaporated milk, replace both the heavy cream and whole milk with evaporated.

I was debating on whether I could even officially call this pie because there is no dough involved.

However, the filling is the same, so I’m calling them crustless pumpkin pie. That also means they’re gluten free.

Or make my small pie crust, use some of it for the ramekins, then freeze the rest.

If you’re looking for traditional pumpkin pie for two, check out my Small Pumpkin Pie and Mini Pumpkin Pie. 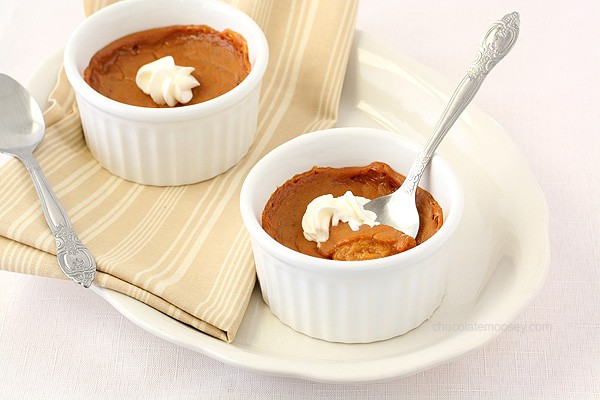 How To Make Eggless Pumpkin Pie

Because this egg free pumpkin pie has no crust, making the filling is super easy.

Next, bring your mixture to a boil. This activates the cornstarch so it’ll thicken.

Stir in your vanilla then divide between two 6-ounce ramekins. Bake at 350F 20-25 minutes or until the center is mostly set with some wiggling and internal temperature reaches 160F degrees.

Cool for 1 hour then refrigerate until cold before serving with homemade whipped cream. 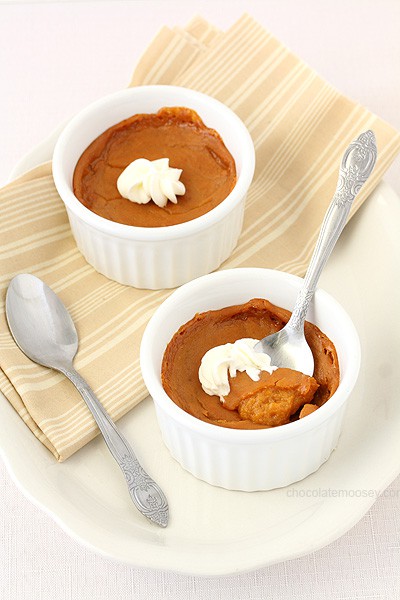 How To Make Vegan Pumpkin Pie

One question I get often is can you substitute almond milk for evaporated milk in pumpkin pie to make it vegan?

Answer is yes you can use most dairy free milks with some adjustments.

Because most vegan milks don’t have as much fat as evaporated milk, you will need to add an extra 1 teaspoon cornstarch to help thicken the filling.

You may also need to adjust the sugar as some dairy free milks such as almond milk can be a bit sweeter than dairy milk.

Can you make Eggless Pumpkin Pie ahead of time?

In order to save you time (and your sanity), you can make eggless pumpkin pie a few days ahead of time.

Once cool, cover and refrigerate until ready to serve with whipped cream.

One downside to small batch baking is you often have leftover ingredients, especially if it comes from a can like pumpkin puree.