When there’s not enough room in the oven to bake, learn how to cook homemade Easy Cheesy Stove Top Scalloped Potatoes from scratch in a cheddar cheese sauce. 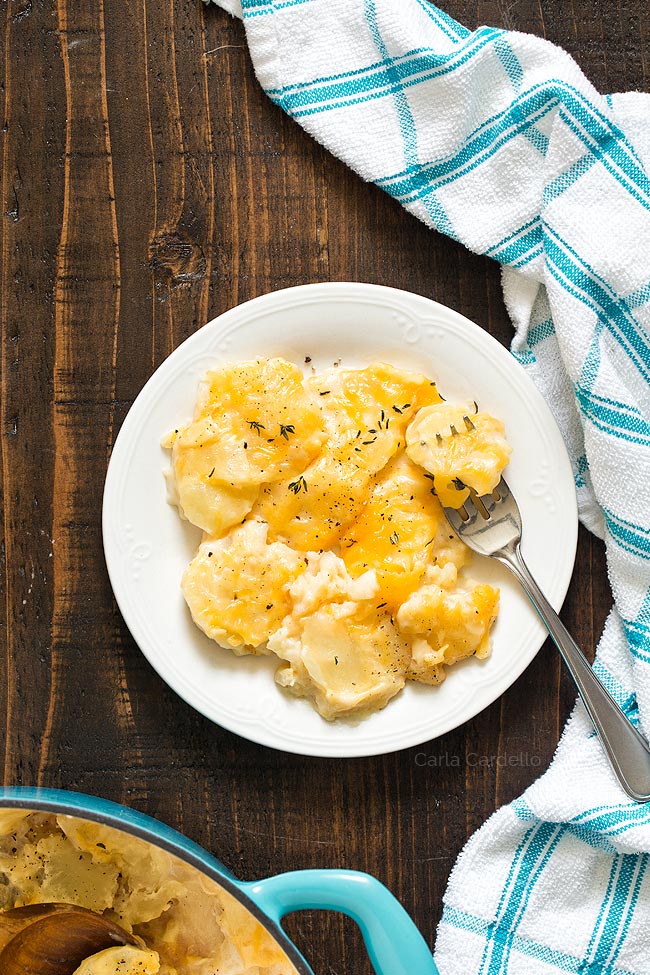 Growing up, we always had boxed scalloped or au gratin potatoes for the holidays. It doesn’t matter if it was Thanksgiving, Christmas, or Easter; there were potatoes as a side.

After cooking on my own for several years, I decided to make homemade Stove Top Scalloped Potatoes without all of the preservatives. It took me a few holidays to get it right, especially cooking it on the stovetop.

When there’s no room left in the oven, you’re left cooking side dishes on the stove. That’s why I set out to make Easy Cheesy Stove Top Scalloped Potatoes as a way to avoid baking in the oven.

Although it’s often associated with holiday dinners, you can also make it for an easy weeknight side dish to serve alongside roasted chicken quarters. 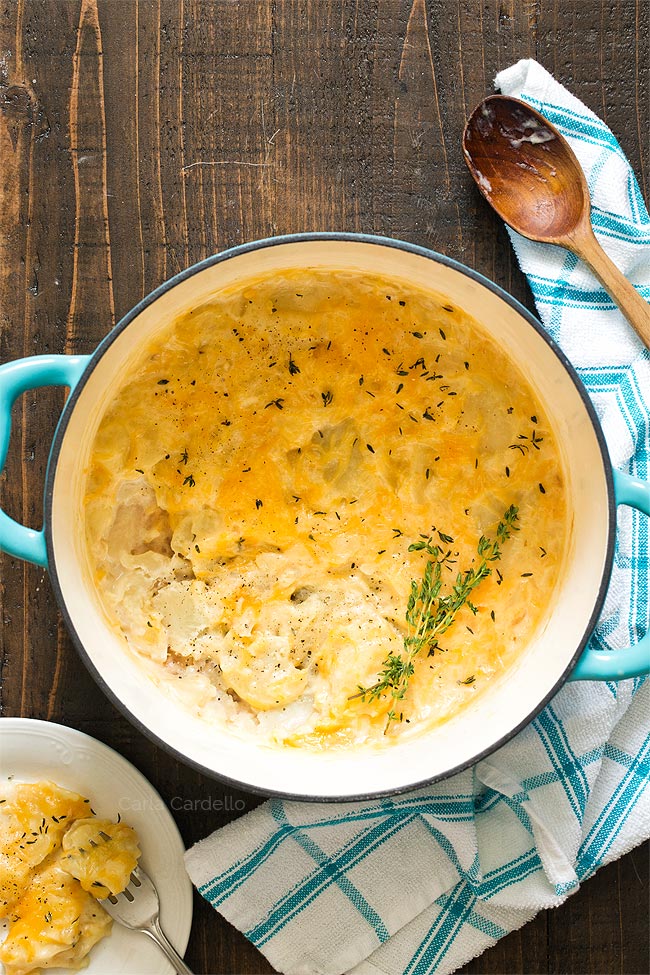 What does scalloped potatoes mean?

What’s the difference between scalloped potatoes and au gratin potatoes?

After spending numerous hours researching and reading through recipes, nobody else knows either.

Another difference is au gratin has breadcrumbs on top, but most au gratin recipes I saw didn’t include breadcrumbs, including my Au Gratin Potatoes For Two.

In conclusion, the rest of the world doesn’t know the difference between scalloped and au gratin. They DO know anything with cheese and potatoes is a winner, no matter what you call it. 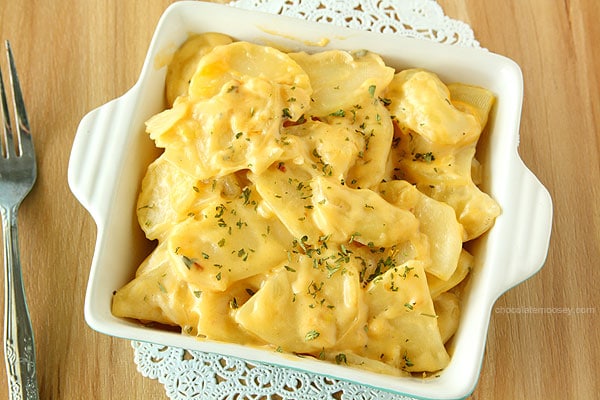 What ingredients are in stove top scalloped potatoes?

The ingredients for Easy Cheesy Scalloped Potatoes are Russet potatoes, shredded cheddar cheese, and whole milk with additional flavors such as garlic. You can also add fresh herbs such as thyme or rosemary.

I highly recommend using whole milk due to the fat content. It makes the cheese sauce rich and creamy. Skim milk won’t have the same results. 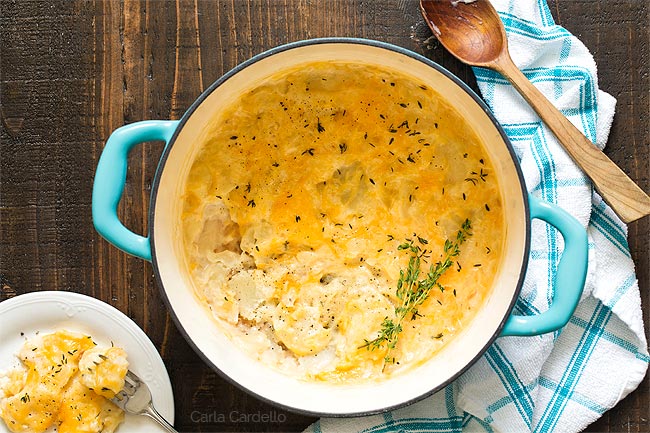 Which potato is best for scalloped potatoes ?

I personally think Russet potatoes make the best potato for stove top scalloped potatoes because of their higher starch level, which results in a creamier sauce.

However, I’ve seen other scalloped potato recipes using Yukon gold, which better hold their shape. Whichever potato you choose, bake until the potatoes are fork tender. 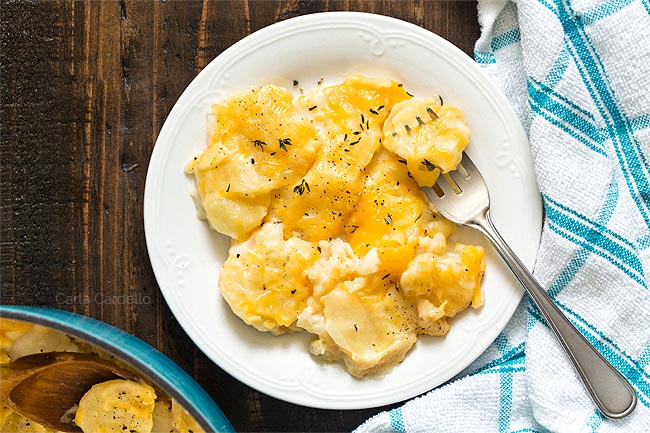 How do you finely slice potatoes?

I reviewed my mandoline for my salt and vinegar chips and BBQ chips so you can see it in action.

My dad usually does this part during the holiday as I am busy preparing all of the other million dishes. He does a great job at it (especially since he can’t mince garlic – don’t ask).

How do you thinly slice potatoes without a mandoline?

If you don’t own a mandoline, slice them carefully and evenly with a knife. The key is making sure they’re the same thickness so they cook evenly. 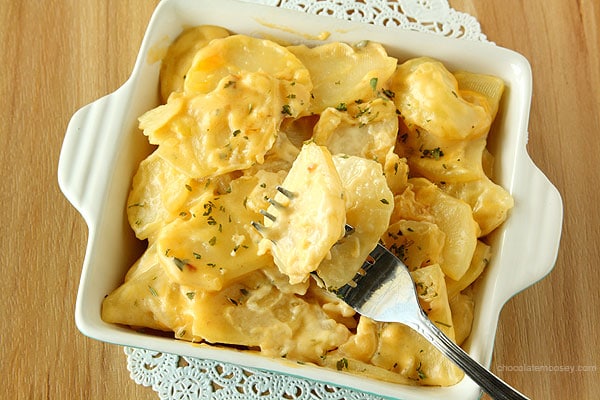 How To Make Cheesy Scalloped Potatoes On Stove Top

To cook scalloped potatoes from scratch on the stove top, you need to use a wide-bottomed pan, preferably a Dutch oven (affiliate link).

Because of the wider surface area, the potatoes will cook more evenly instead of stacking them thick on top of each other.

Next, you need to create a roux, which is a paste made of fat, flour, and liquid. This helps thicken the cheese sauce that’ll coat the potato.

Finally, you cook the thinly sliced potatoes in boiling milk. You will need to stir often because the potatoes may burn on the bottom if you don’t.

What To Serve With Stove Top Scalloped Potatoes

Now that you made easy cheesy stove top scalloped potatoes, what do you serve with it? Here are some dinner ideas: 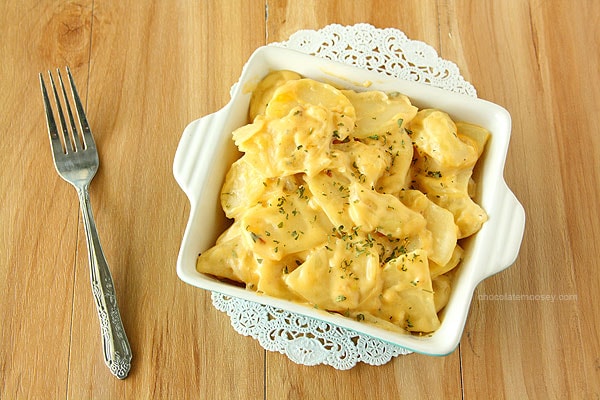 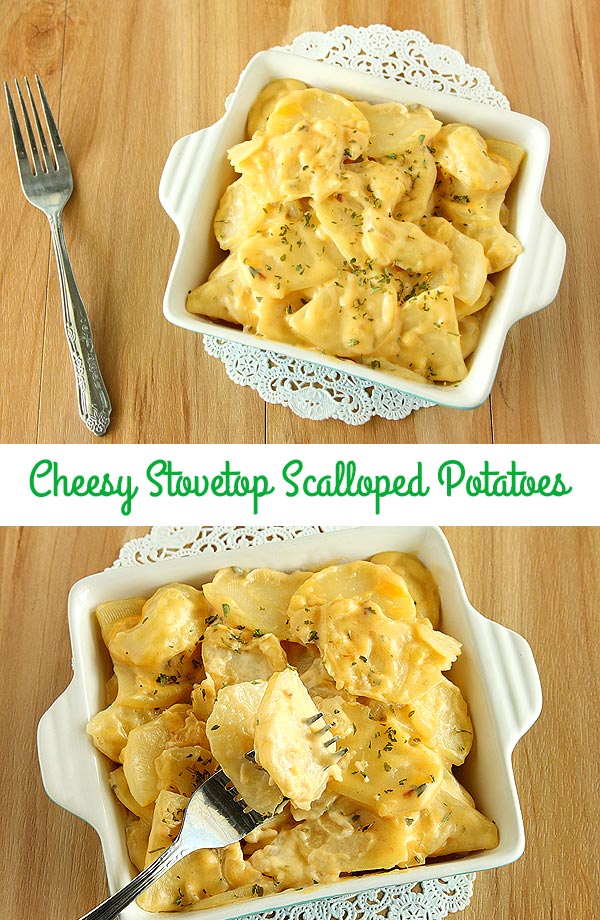