No Bake Caramel Apple Cheesecake without Cool Whip is much easier to eat than caramel apples on a stick and doesn’t require your oven. Serve as caramel apple cheesecake cups for two. 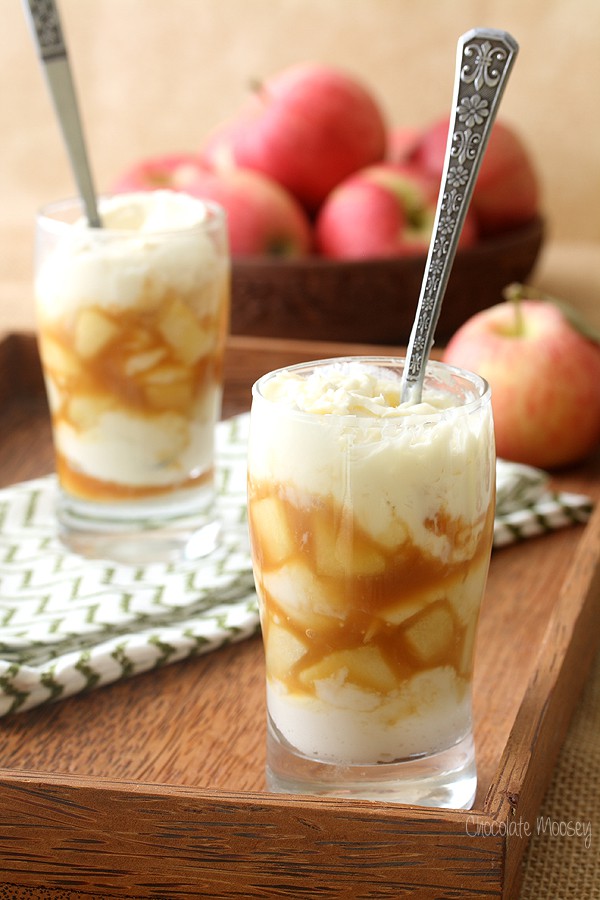 Can you feel it? The weather is finally cooling down.

I am now forced to wear a jacket in the mornings when I wake up and in the evenings when I go for a walk at the park.

It’s no secret I’ve been ready for fall all month, and now Mother Nature agrees.

The ingredient of the month in my kitchen is apples, and there are two standard apple dessert recipes in the U.S. – homemade apple pie filling for mini apple pies and caramel apples.

However, I do not love caramel apples on a stick, mainly because that sticky, hard caramel is difficult to eat, and who wants to struggle while trying to eat?

But if I have the chance to put apples and homemade caramel sauce together with cheesecake, I’m taking it.

No Bake Caramel Apple Cheesecake is a dessert for two made with an easy no bake cheesecake filling then layered with cooked caramel apples.

And because I make everything from scratch, it’s a no bake cheesecake filling without Cool Whip. Instead, you make homemade whipped cream then fold it into a cream cheese mixture.

It’s like eating a mini apple pie cheesecake. Whether you share the second cup is up to you.

Whether you don’t want to make a whole cheesecake, feel a little intimidated baking one, or simply want an easy dessert for two without turning on your oven, No Bake Caramel Apple Cheesecake is the perfect treat to celebrate fall. 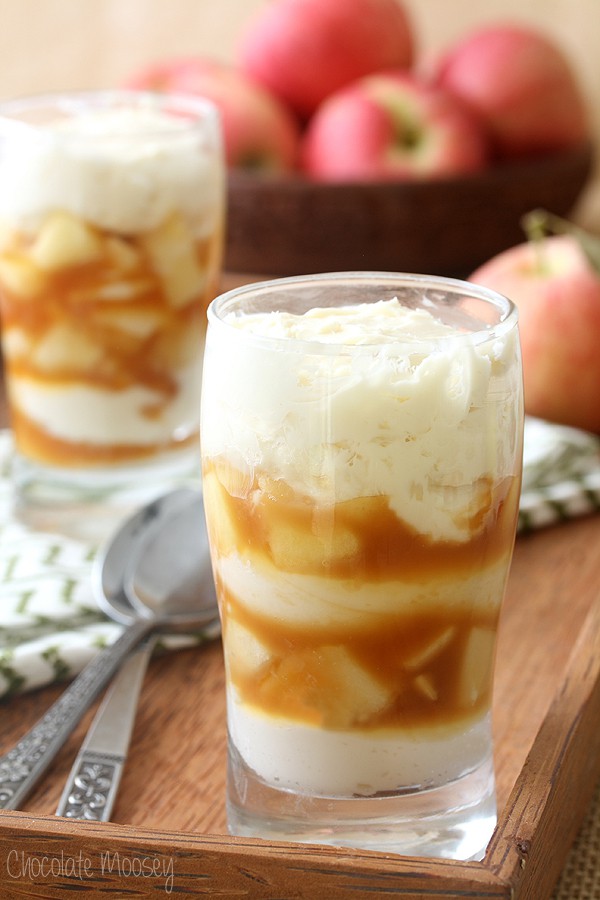 This recipe for no bake caramel apple cheesecakes is based on my Red White and Blue Cheesecake.

That’s the beauty of developing recipes. You take a trusted recipe and tweak it until your heart’s desire.

To make your apple no bake cheesecake, you’ll need the following ingredients:

Want to bake your cheesecake? Check out my Caramel Apple Cheesecake instead. 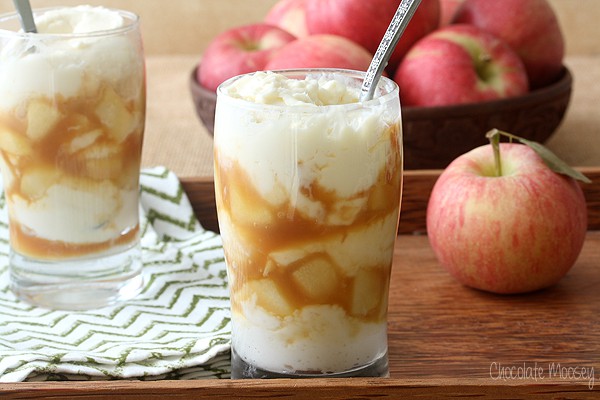 How To Make No Bake Caramel Apple Cheesecake

To make caramel apple cheesecake cups, first make your caramel apples. Add apples, sugar, cinnamon, and lemon juice to a saucepan and bring to a boil.

Cook for 5 minutes or until the apples soften. Remove from the heat and stir in caramel sauce then cool while you make the cheesecake.

Next, make your crust by mixing together your graham cracker crumbs and melted butter.

Divide the mixture between two parfait glasses or bowls then press into the bottom to form a crust. Refrigerate while you make the filling.

In a large mixing bowl beat your heavy cream on high speed until stiff peaks form. That means when you pull the beater up, peaks will form and not fall over.

Transfer your whipped cream to another bowl and keep cold in the fridge.

In the same mixing bowl (no need to clean it), beat together the cream cheese, sugar, and vanilla until smooth and creamy.

Scrape down the bowl then fold in your whipped cream until no white streaks remain.

Don’t know what that means? Learn how to fold whipped cream from The Kitchn.

Divide your cheesecake filling among your cups, layering with caramel apples. Refrigerate for at least 4 hours before serving.

Enjoyed this recipe? Check out my other recipes for caramel apple desserts:

In the mood for apple pie? Check out my recipes using apple pie filling.