Looking for the best coconut pecan frosting recipe without leftovers? Look no further than this Small Batch German Chocolate Cake Frosting made without evaporated milk! Makes enough to frost one 6 inch cake. 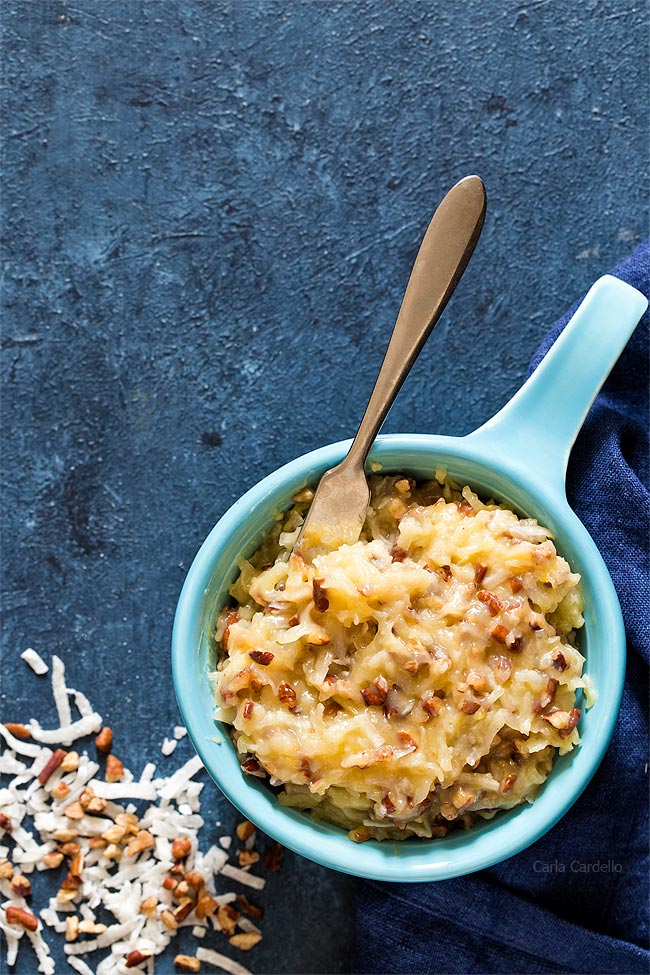 To say I love German chocolate desserts is probably an understatement.

As I was going through my recipes, I noticed I repeated the same small batch recipe for German chocolate frosting over and over again.

Rather than constantly repeating myself and having answers to questions all over the place, I decided to break it out into its own post as part of my small batch frosting mini series.

German chocolate frosting is a thick and creamy coconut pecan frosting. Typically you use it to frost German chocolate cake, but I’ve also used it as sandwich cookie filling.

Most recipes use canned evaporated milk, which unless you’re using the whole can at once, is annoying for small batch baking. I mean, what DO you do with the leftovers?

However, my recipe is different (and better, ahem) because I found a way to substitute for that with an easy pantry (er refrigerator?) ingredient.

I’m hoping you have this ingredient in your fridge too. If not, it’s easy to buy and easy to use up any leftovers you may have afterwards. 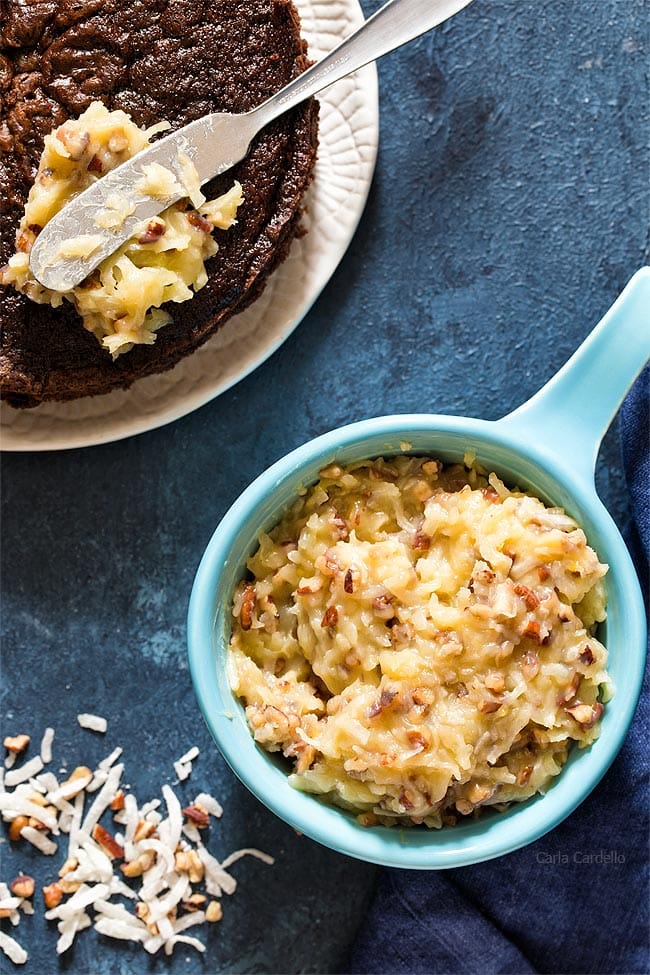 First, let’s talk about what exactly is German chocolate frosting. It’s a thick and creamy coconut pecan frosting that, despite its name, isn’t German. It’s actually named after the type of chocolate used in the cake, but I’ll talk about that more when I post the accompanying cake recipe.

Unlike buttercream frosting, you don’t pipe it. You spread it onto your cake or cupcake with an offset spatula.

In order to spread it, it has to be thick. Instead of beating in powdered sugar, German chocolate frosting is thickened by boiling together heavy cream, sugar, butter, and an egg yolk then cooling until a spreadable consistency.

Since you are using an egg yolk, here are recipes to use up leftover egg whites. 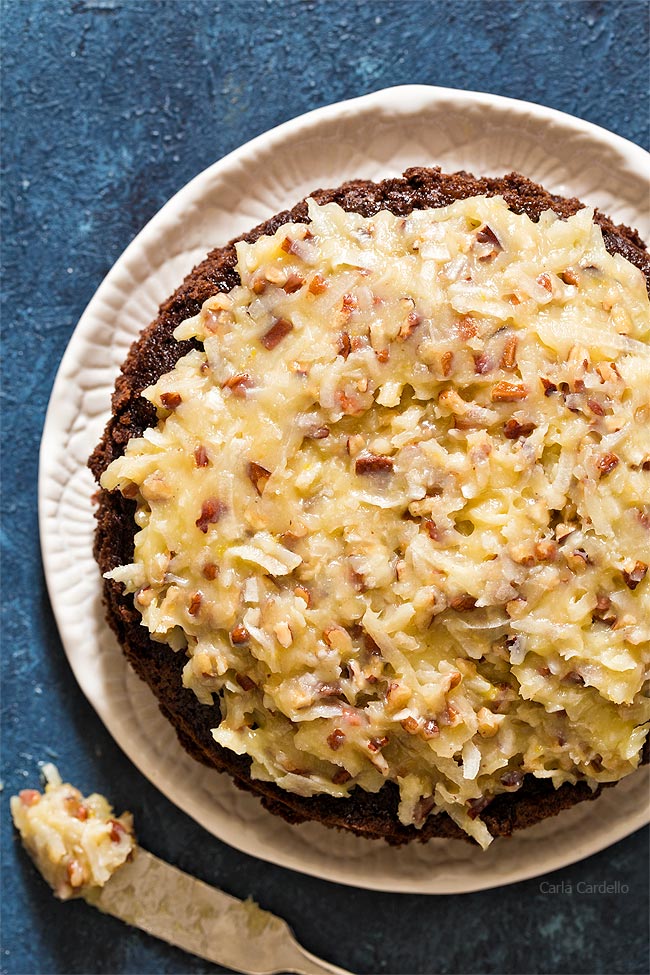 The frosting will take an hour to cool and thicken at room temperature, but if you’re in a hurry, here’s how to speed up the cooling time.

Spread the frosting in a thin layer onto a small cookie sheet or plate. This exposes more surface area for the heat to disperse, which means it’ll cool faster.

At this point, you can either refrigerate for 30 minutes or freeze for 15 minutes (but don’t let it freeze too long or you’ll have to let it thaw).

If your frosting does become too cold to use, let it sit out at room temperature for about 15 minutes or until soft enough to spread. Otherwise, you may tear up your cake. 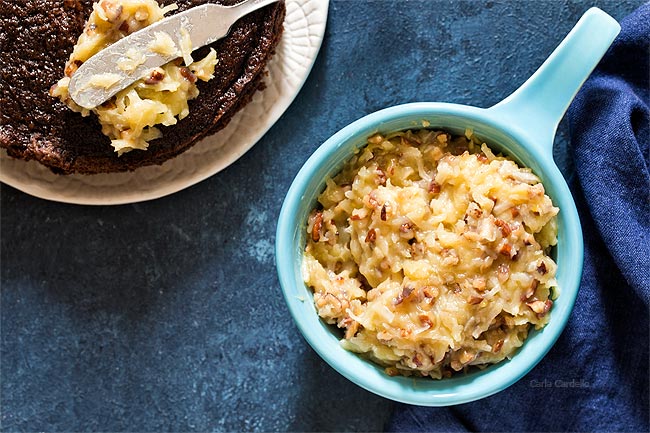 Traditionally German chocolate frosting is made with canned evaporated milk. However, that’s not an item I normally keep in my pantry. But I found a way to make the coconut pecan frosting without evaporated milk.

To substitute for evaporated milk in coconut pecan frosting, use heavy whipping cream.

Evaporated milk is milk that has been boiled down to reduce, or evaporate, the water content (hence the name). This results in a slightly thicker milk than regular dairy milk.

Although heavy cream isn’t the same as evaporated milk, substituting it still achieves the same effect – a creamy thick frosting.

Don’t know what to do with the rest of your cream? Here are some recipes using leftover heavy cream. 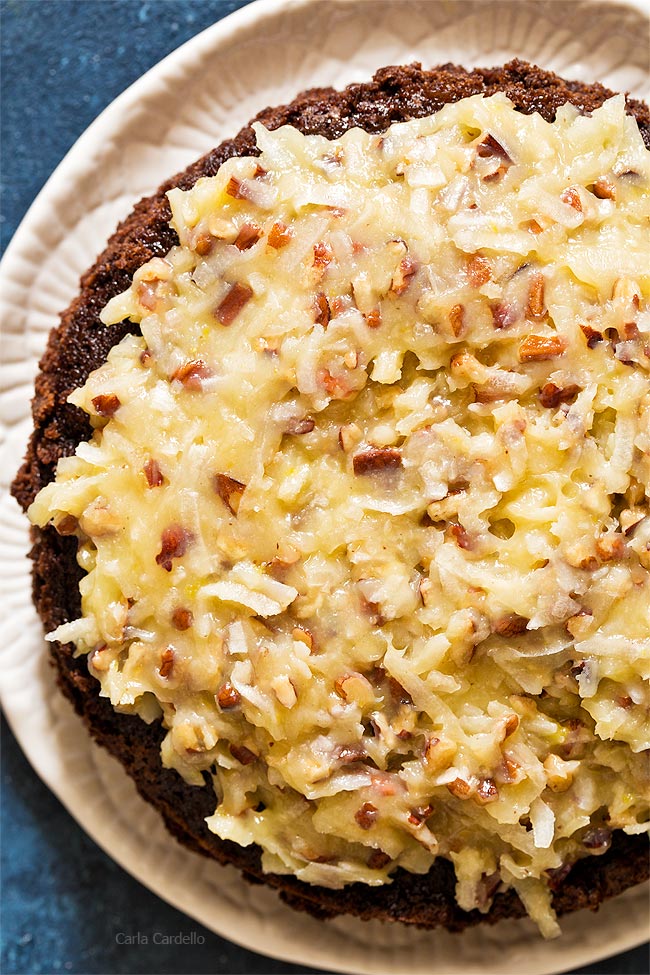 Small batch frosting means one thing – you won’t have leftovers.

I don’t know about you, but I hate leftover frosting because all I do is store it in the fridge then throw it out two weeks later.

The yield for this frosting recipe will range depending on what you’re making:

As much fun as it is to eat frosting with a spoon, chances are you need small cake recipes too. That’s why I wrote my 6 Inch Cake Recipes and Small Batch Cupcake Recipes guides.