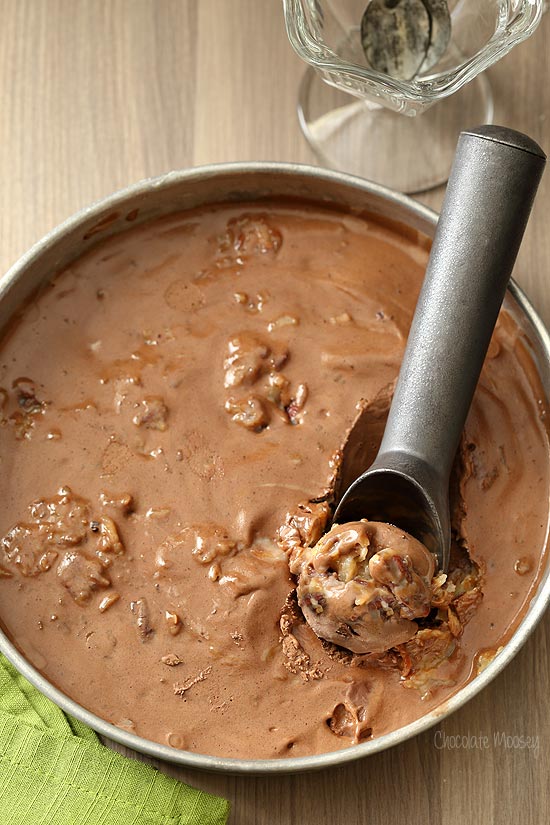 Even though I have plenty of ice cream recipes, I’ve always “churned” the ice cream by hand.

What you do is put the ice cream in the freezer and beat with a whisk every 30-45 minutes or until it freezes solid.

The problem was I would often forget about it or would freeze it shortly before going to bed (since I was working a full time job during the day and had to get my ice cream ready to shoot that upcoming weekend).

Although the ice cream was fine, the texture was a bit icier because nothing was breaking up the ice crystals that formed.

This year I finally broke down and bought an ice cream maker.

It’s not that I didn’t want one; I just wasn’t sure if I had the room (which is ironic because this apartment is smaller than my last one).

Considering how much use I would get out of it (unlike the bread maker I finally gave to a friend before I moved), I decided to go for it.

Kohl’s had it on sale plus a $10 off coupon plus 30 percent off. The only downfall is that Kohl’s only sold it in red, which at least matches my red stand mixer and my out of order red espresso machine (which I also bought both as red by default). Red is not my favorite color, despite what my kitchen looks like.

Of course with a brand new machine, I need to break it in with an awesome ice cream flavor.

Technically the first thing I ever churned in it was watermelon sorbet for floats.

Second flavor was a watermelon ice cream which I had mixed feelings on taste wise.

Yes, actual frosting folded in (which is the best part of the cake)!

Not just toasted pecans and coconut like most recipes I saw. 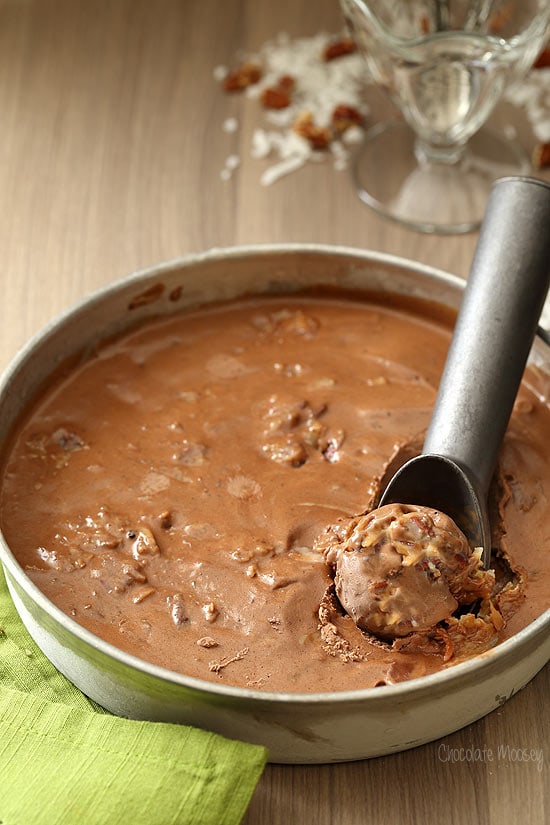 How To Churn Homemade Ice Cream

If you’ve never used an ice cream maker before, it only takes 15-20 minutes to churn 1 pint of German chocolate cake ice cream.

The downfall is remembering to freeze the canister for at least 18-24 hours.

If you have the room, you can store it in your freezer to be prepared at all times. However, if your freezer starts getting full, store it at room temperature and hope you remember to plan ahead.

Once your German chocolate ice cream is churned, you need to store it in the freezer for another 4-8 hours to harden (or you can eat it straight from the machine as really soft soft-serve ice cream).

I do find the texture much smoother and easier to scoop than freezing ice cream by hand.

If you don’t own machine, don’t worry – read this guide on how to freeze ice cream without one.

What is the difference between German chocolate and regular chocolate?

Or you can do a mixture of semisweet and bittersweet chocolate.

Just make sure you don’t use unsweetened.

Most German chocolate cake frosting recipes are made with either evaporated milk or sweetened condensed milk.

Rather than opening a can for just a little bit of milk, I decided to use heavy cream, which you need to make ice cream anyway.

Once the ice cream is churned, you can either fold in the frosting or layer it in your container.

You can read more about the recipe on my German Chocolate Frosting post. 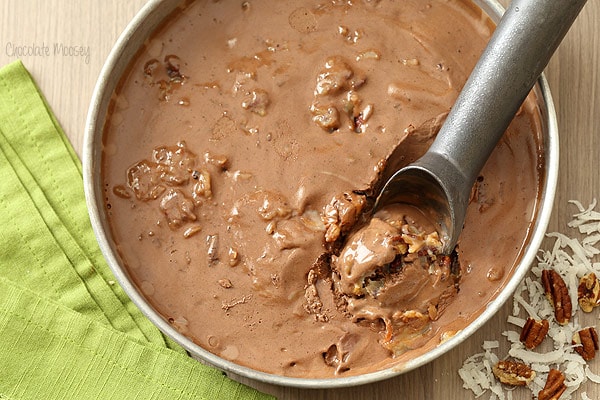 Items You May Need (Affiliate Links):

Not in the mood for chocolate? Check out my Strawberry Cheesecake Ice Cream.

Enjoyed this ice cream? You may also enjoy these other German chocolate recipes:

Source: Adapted from The Perfect Scoop