Looking for a hearty meatless dinner? These Vegetarian Stuffed Peppers For Two will hit the spot with rice, tomatoes, and black beans! 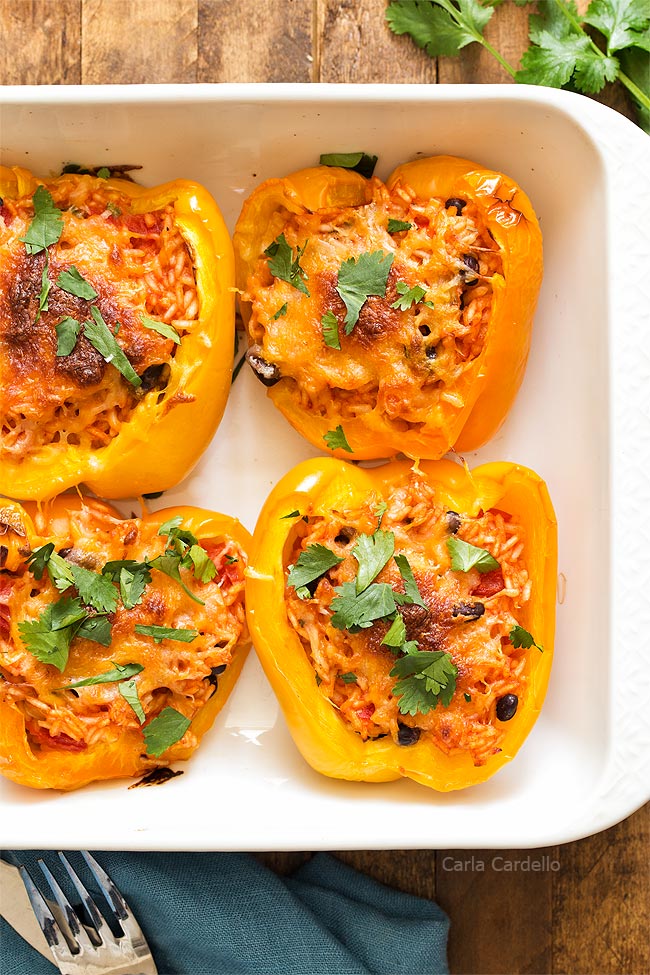 With springtime coming up, I wanted to create a vegetarian main dish for your Easter Dinner For Two.

I have so many meat options but not enough vegetarian. I do have my Quiche Florentine, but I needed more.

Many of you have asked for more meatless recipes, so I’m working on expanding my recipe collection.

Back in the fall I made a vegan stuffed butternut squash for Thanksgiving Dinner For Two.

I wanted to recreate that for Easter but was trying to think of a vegetable to stuff. Too early for stuffed zucchini with rice. Too late for butternut squash.

Then it hit me – Vegetarian Stuffed Peppers! Bell peppers are available all year round, so you can definitely make them for Easter.

I’m not fond of green peppers, so as an adult I made mine with orange and yellow peppers.

Instead of your typical ground beef filling, I opted to make a tomato rice filling (similar to my homemade Spanish rice but without the Spanish flair). Then I added black beans for protein.

It’s almost vegan as I added shredded cheese on top, but you can easily swap that out for a vegan-friendly cheese or leave it out altogether. 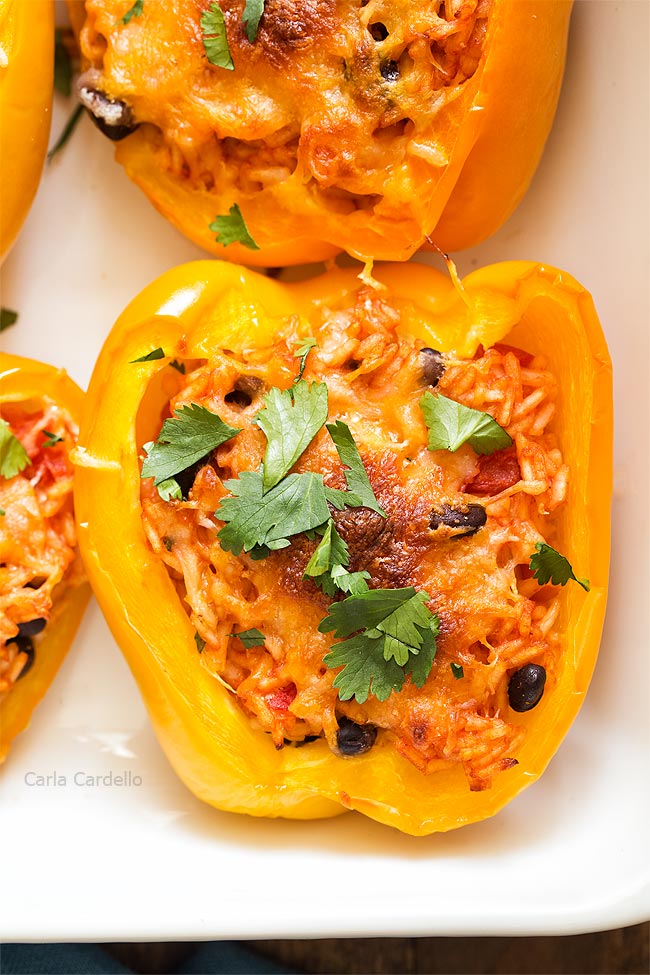 The ingredients for these stuffed peppers for two are pantry-friendly. They are: 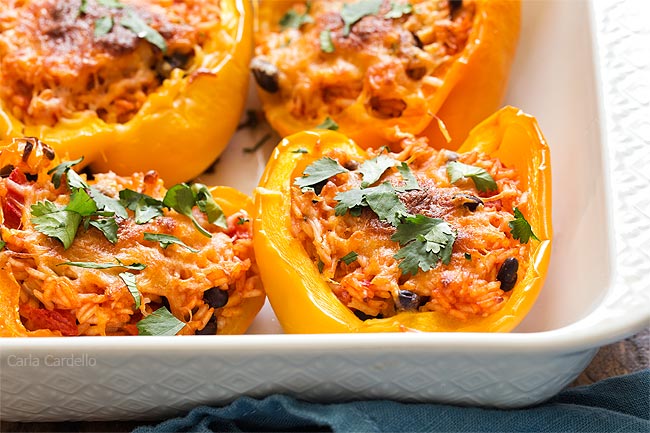 How To Stuff Bell Peppers

Traditionally you cut the tops off of your bell pepper, remove the seeds and membrane, then stuff with rice.

However, this method means your peppers will take forever to bake and soften. Plus once you eat the cheese off the top, no more cheese.

By cutting each pepper in half, they cook faster. Plus now you have double the amount of surface area for cheese. 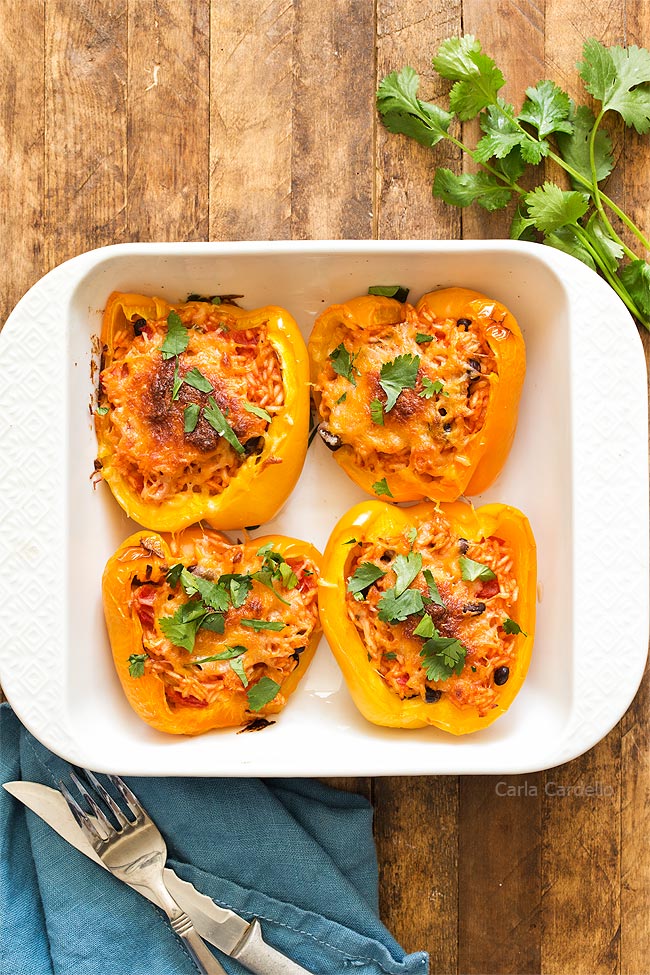 How To Make Vegetarian Stuffed Peppers

To make meatless stuffed peppers, first you need to make your rice filling.

Heat your oil in large skillet. Once hot, cook your onion until softened. Add your garlic and rice then cook for 1-2 minutes or until the rice is translucent.

Next, stir in your tomato sauce and broth. Bring to a boil. Once boiling, turn the heat down to a simmer and cover with lid. Cook for 10-12 minutes or until all of the liquid has been absorbed.

Once cooked, stir in your tomatoes, black beans, lime juice, and cilantro.

While the rice is cooking, preheat your oven to 400F and have an 8×8 or similar pan ready. Add your pepper halves to the pan in a single layer.

Transfer your rice to the peppers, filling them up nice and fully. Top with cheese.

Do you have to boil your peppers before stuffing them?

Nope, no need to pre-cook your peppers before stuffing! They’ll soften up in the oven after baking, especially since you’re cutting them in half. 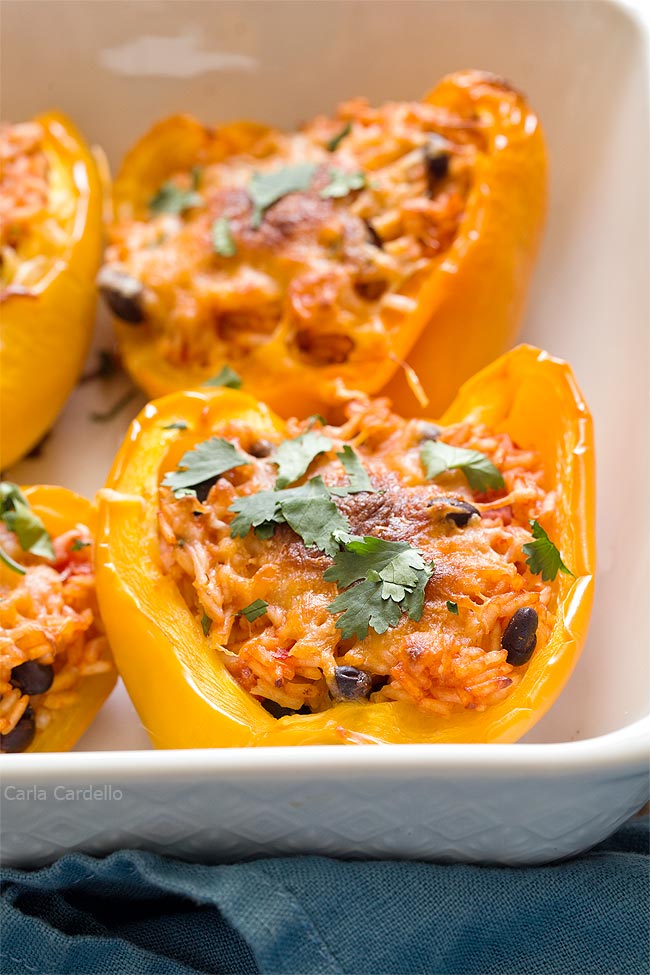 What To Do With Leftover Canned Tomatoes and Black Beans

Ok, ok. I get it. Who wants to open a can for a measly quarter cup of tomatoes and black beans?

I chose canned mostly for the convenience. You can certainly chop up a fresh tomato or use dried black beans and make the appropriate amount.

However, with a little bit of menu planning you can use up those leftover canned goods later on in the week.

For leftover canned tomatoes you can make One Pot Lasagna Soup.

I also like to substitute black beans for the lentils in Mujadarafrom Aarti Sequeira.

You also use both canned goods in Buffalo Chicken Chili. 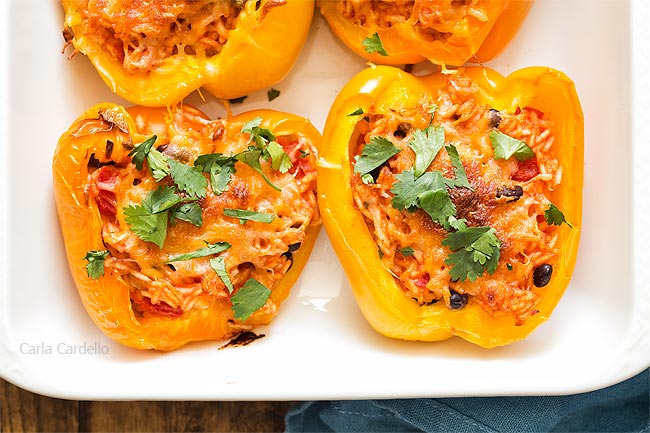 Sides To Serve With Stuffed Peppers

To make your stuffed peppers for a complete meal, check out these side dish recipes: