Mini Pumpkin Cheesecakes with an Oreo crust are a creamy fall dessert baked in a muffin pan. Serve this black and orange dessert for Halloween or as a Thanksgiving For Two dessert. 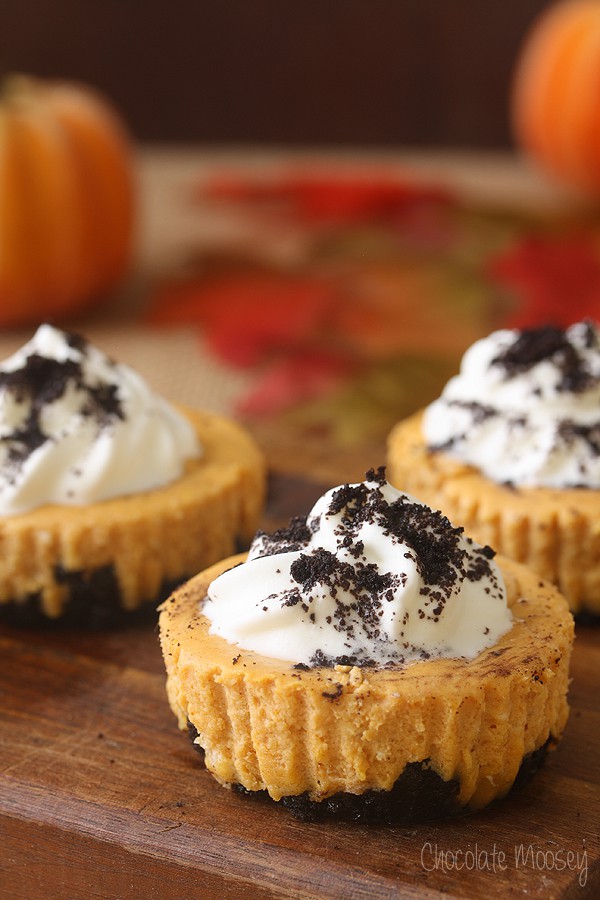 When it comes to decorating desserts for the holidays, well, let’s just say I know my weaknesses.

Some bakers are a natural at decorating. They can pipe buttercream roses, turn cupcakes into pumpkins, and flawlessly pipe royal icing onto mini gingerbread cookies.

With Halloween coming up, I wanted to share something festive.

This time I decided to stick with my baking strengths and make Mini Pumpkin Cheesecakes with an Oreo crust.

This mini pumpkin cheesecake recipe is very creamy and taste like pumpkin pie in cheesecake form. I really like how they turned out black and orange because not many foods can give you that natural black look.

I’m not opposed to food coloring, but my hands get very, uh, colorful when I do use it.

Not only are they black and orange for Halloween, they’re small batch pumpkin cheesecakes, which make a great Thanksgiving for two dessert.

Oops did I say the T-word before November? Ahh well hopefully you can forgive me after you eat a few of these mini pumpkin cheesecakes. 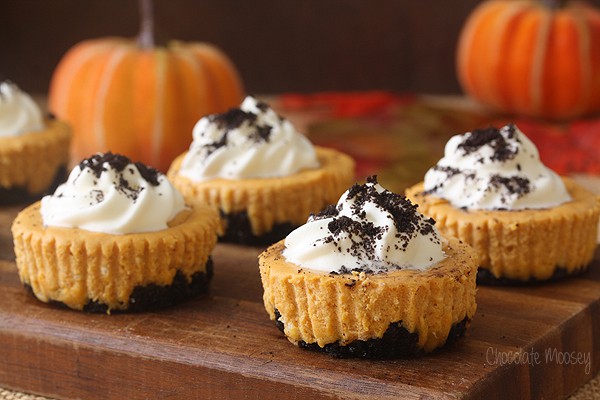 Mini Oreo Pumpkin Cheesecakes are made up of a few easy ingredients: 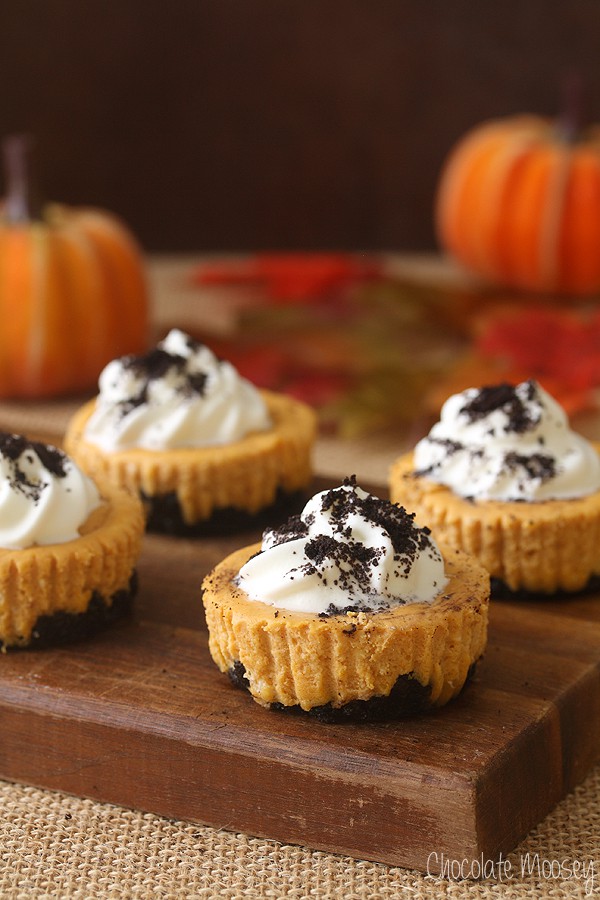 How To Make Mini Pumpkin Cheesecakes

To make your mini pumpkin cheesecake recipe, start with your crust.

Mix together your cookie crumbs and melted butter. Then add roughly 2 tablespoons to each paper liner and press down to form a bottom crust.

Bake for about 10 minutes or until the crust no longer looks wet. This will help crisp up the crust before the cheesecake filling is added.

While the crust cools, make the pumpkin cheesecake filling.

Beat together the cream cheese and sugar until super smooth, scraping down the bowl as needed.
Then beat in the egg, being careful not to overbeat the batter.

Finally, add the pumpkin and vanilla for flavor.

Transfer the batter to your cookie crust. Bake at 325F degrees for 20-25 minutes.

How do you know when a mini cheesecakes are done?

Mini pumpkin cheesecakes are done baking when the edges are set, the center doesn’t look wet and is mostly set with some wiggling, and internal temperature reaches 150F degrees.

They’ll puff up a bit but will deflate and flatten when cooling.

Do you need a water bath for mini cheesecakes?

Oreo pumpkin cheesecakes do not need a water bath because they’re small enough to evenly bake in the middle without overbaking the top.

How To Garnish Pumpkin Cheesecake

The best garnish for this mini pumpkin cheesecake recipe is homemade whipped cream.

How long do mini cheesecakes last in the fridge?

Cheesecake can last up to 5-7 days in the refrigerator. Although with this small batch recipe, they’ll likely be gone before then.

Can mini cheesecakes be frozen?

Yes, mini cheesecakes can be frozen before you garnish them.

First place them in a single layer on a baking sheet or plate then freeze until firm, about 1 hour. This prevents them from sticking to the plastic wrap and to each other.

Next wrap each cheesecake individually in plastic wrap then place in a freezer-safe bag. Freeze for up to 1-2 months.

Why do mini cheesecakes sink in the middle?

Chances are if your mini cheesecakes sunk in the middle after cooling, the middle is underbaked. When it’s underbaked, it’s not strong enough to support the top.

Another possible reason is you overbeat the batter especially after adding the egg, incorporating more air than needed.

This air will cause the batter to rise too much then sink as it cools.

Looking for more flavors? Check out my Easy Mini Cheesecake Recipes post where I list all of my recipes for mini cheesecakes in one spot.