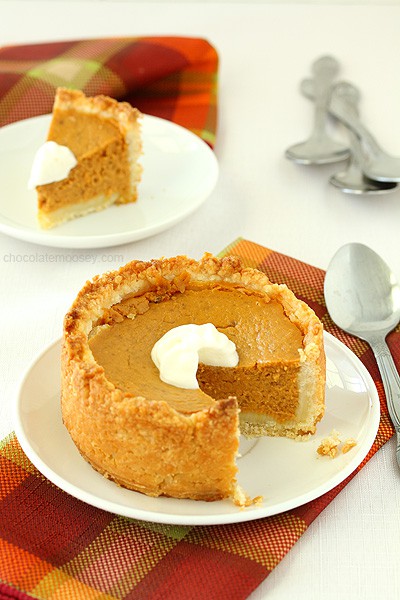 Thanksgiving to many people means lots of family gathered at the dinner table, eating 20 pound turkeys, 10 side dishes, and 3 different kinds of pie.

For me, I don’t have a huge family. It’s only me, my parents, and my brother.

I know there are other families just like us where by the time you get to dessert, you can barely fit in a slice of pie.

That’s why I opted for this Mini Pumpkin Pie recipe. Two mini pumpkin pie for two made in 4 inch springform pans with a homemade cream cheese pie crust.

Don’t have mini springform pans? Check out my Small Pumpkin Pie made in a 6 inch pie plate.

Why mini pies? The slices are smaller so you can still get a taste of Thanksgiving without as many calories (different story if you eat the whole pie).

Or maybe only some of your family likes pumpkin, so a whole pie won’t get eaten.

Or maybe you want to serve both pumpkin and pecan pies.

You also don’t need to open a can of evaporated milk. Nothing is more frustrating than opening a can of something and using only a small amount. 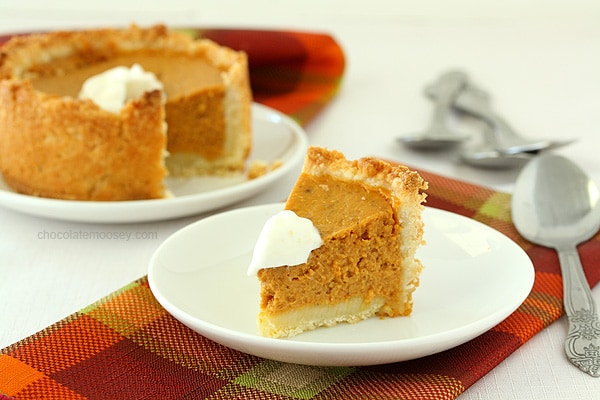 How To Make Pumpkin Pie

There are two parts to making mini pumpkin pie – the pie crust and the pie filling. You can make the pie ahead of time so you’re not stressing out on Thanksgiving Day.

This pumpkin pie recipe is based off of the traditional Libby’s Famous Pumpkin Pie recipe, which my dad swears by. I cut the filling down to fit into two mini pies then made a cream cheese pie crust.

The pie crust for my mini pumpkin pies is similar to my Small Pie Crust but used cream cheese instead of shortening to add a bit of tang to the dough.

It’s important your butter and cream cheese are cold. This keeps the fat intact and not blended into the dough like you would with cookies or cake.

When you have chunks of butter in the dough, it’ll turn into steam while baking, which then creates flakey air pockets.

The easiest way to make pie dough is in a food processor. It takes only 5 minutes to cut in the butter and cream cheese to form a dough.

However, if you don’t have a food processor, add your dry ingredients to a large bowl then use a pastry cutter to cut the butter and cream cheese into the flour mixture.

It’s important the pie dough is cold before rolling it out because warm dough will stick to everything no matter how much flour you use.

Working with one piece at a time, roll the dough into a 6 inch circle. This gives you enough dough to cover the bottom and sides of a mini springform pan.

If the dough tears, don’t worry! You can easily patch the dough back together once in the pan.

How to blind bake pie crust

Blind baking the crust for pumpkin pie ensures you don’t end up with a soggy crust bottom.

This means the crust is partially baked on its own, allowing it to stay firm even after adding the custard filling.

If you were to add the pumpkin pie filling to an unbaked pie crust, it will never crisp up no matter how long you bake the pie. This results in a soggy crust bottom.

Because baking pie crust on its own tends to puff up, you need to add some greased foil (so it doesn’t stick to the dough) and pie weights to keep the crust in place while it bakes.

I use dried lentils for the weight, but you can also use dried beans.

During the last 5 minutes of blind baking, remove the foil. This direct exposure to the heat ensures the crust is no longer wet before adding the filling.

How to make pumpkin pie filling

Pumpkin pie filling is easy to make. All you do is whisk everything together in a bowl then pour into a partially baked pie crust.

Traditionally pumpkin pie filling contains evaporated milk. However, I hate opening a can of evaporated milk because I rarely use the entire can in small batch baking.

Luckily, you can substitute heavy cream and whole milk for evaporated milk. This combination ensures there’s enough milk fat in the filling.

If you’re looking to make pumpkin pie without eggs, check out my Eggless Pumpkin Pie.

Why does my pumpkin pie crack in the middle?

Pumpkin pie is considered a custard pie thanks to the egg filling. That also means it has a tendency to crack if it’s baked too long.

People often bake pumpkin pie too long because they can’t tell when the pie is actually done baking.

Much like a cheesecake, pumpkin pie is done when the center is firm to the touch and has a slight jiggle. It will never not jiggle, so just make sure it’s not jiggling too much.

If it does unfortunately crack, luckily you can cover it up with homemade whipped cream.

Should you refrigerate pumpkin pie?

Homemade pumpkin pie can sit out for 2 hours but then must be refrigerated to prevent bacteria growth.

Can you freeze pumpkin pie?

Yes, pumpkin pie freezes really well. This is especially useful when you’re making Thanksgiving dinner and have a million things on your to do list.

Wrap the cooled pie in several layers of plastic wrap before freezing.

To thaw pumpkin pie, place it in the refrigerator 12 hours prior to serving.

If you let it thaw at room temperature instead, the filling will weep and create a soggy crust. That’s why you want a slow thaw in the refrigerator.

Making pumpkin pie for two means you won’t use a whole can of pumpkin puree. Here are more recipes using leftover canned pumpkin: