These simple Roasted Brussels Sprouts with balsamic vinegar, olive oil, and sea salt make an incredibly easy side dish and a delicious way to eat more vegetables with dinner. 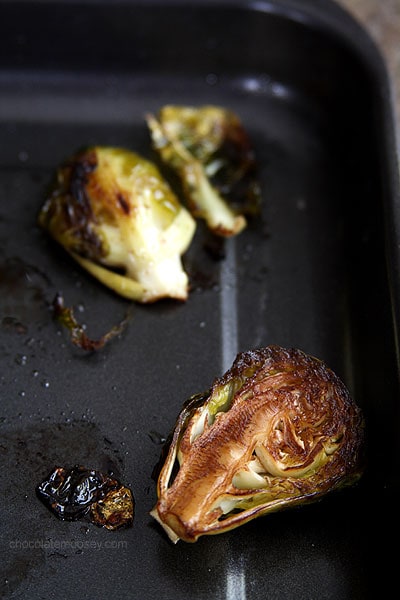 I wasn’t supposed to post the recipe for these Roasted Brussels Sprouts with balsamic.

I post mostly about desserts, not vegetables. And certainly not about Brussels sprouts. Want to know what happened?

Sometimes bloggers reach a breaking point. Things go wrong and you are left crying because your dulce de leche milkshakes overflowed onto the tablecloth you just ruined.

Sometimes the only thing left to do is walk away. And somehow I came back with Roasted Brussels Sprouts with balsamic vinegar, which I promise are not the mushy overcooked green blobs you grew up eating as a child.

In fact, these are more addicting than French fries. (Although a lot of places make French fries wrong, so it’s not far fetched).

If there’s one rule in life, it’s every vegetable tastes better when roasted. It’s also the easiest side dish.

If I don’t know what I’m making but I need something green on the table, I buy a vegetable and roast it. The recipe is the same: Toss in olive oil and sea salt. Bake until brown. 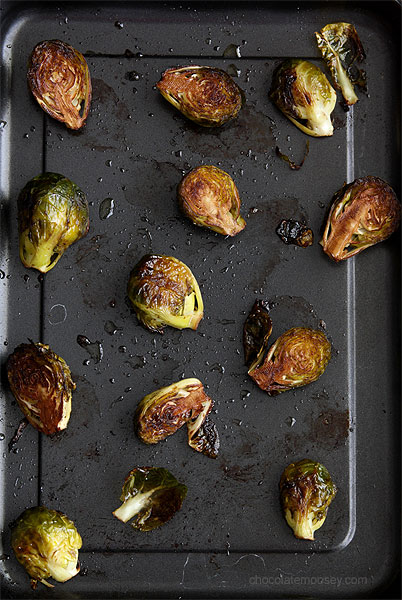 After my milkshake, I was really upset.

Now it wasn’t only the milkshakes that pushed me. It was the failed shoot from the night before. The full time job. The house work. The search for answers. The not being good enough, popular enough, big enough.

The milkshake shoot wasn’t shaping up to what I had envisioned, and I lost it. I couldn’t even think about cooking dinner that day, so I did the one thing I knew I couldn’t mess up – I took a bunch of donations to the thrift store. Then I grabbed a sandwich for dinner and went home. 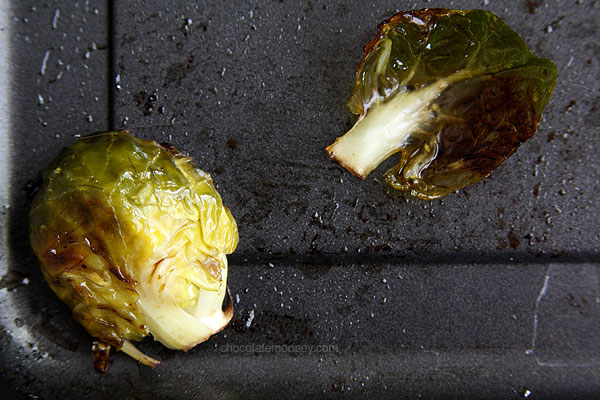 Still upset, I decided to cancel all blog-related plans for the evening and read my cookbooks. I had about 5 new magazines I haven’t read yet plus books lying all over the house.

I cleaned up one shelf (out of three) plus a few piles on the floor (don’t judge) and made a HUGE donation pile so I could make room for the new ones I bought this year.

As the night went on, I was reminded about why I fell in love with blogging. I’m obsessed with recipes, and the two Bon Appetit magazines (yes I was that far behind on new issues) were packed full of “I want that now!” moments.

I’m trying to eat more vegetables and had Brussels sprouts in the fridge. I was too tired to actually cook anything, so I opted for simply roasting them.

Lesson learned: After that horrible day, it is important to blog about what I love to eat, not eat what I blog. Besides, we need some way to balance out all of that cheesecake, right? 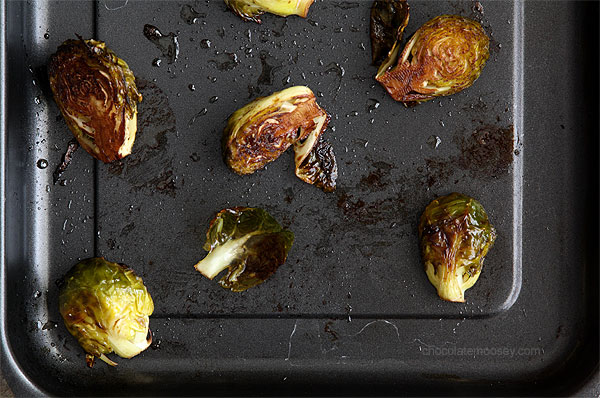 I think all of us have the same story about why we don’t like Brussels sprouts.

Fast forward to being an adult where one of my coworkers had some and made me eat one. I liked it, which when you think about it makes sense because I love cabbage. Turns out roasting Brussels sprouts with olive oil and sea salt is the key to making them super tasty.

How do you roast Brussels sprouts?

The method for roasting Brussels sprouts is easy – cut them in half, toss them in olive oil and sea salt, spread them into an even layer cut-side down, then bake for 25 minutes in a 400F degree oven.

In addition to olive and salt, I add balsamic vinegar to mine. Seriously I can pour that stuff onto anything. The acid is a nice balance to the fat and makes the Brussels sprouts pop a little more in flavor.

If you don’t have any balsamic vinegar, you can add some fresh lemon juice.

What’s the difference between roasting and baking?

Roasting and baking may seem like the same method, but there are some differences.

Roasting, which is typically associated with large cuts of meat, is when you brush or toss the food with oil to add flavor and to speed up the crisping process. It works best in an oven 400F degrees or higher.

Baking, which is typically associated with breads, desserts, and smaller cuts of meat, helps give the food structure (think raw dough or wet cake batter) and works best at 350F degrees or lower.

In other words, if you want your food to be brown and crispy, you roast it. If your food completely transforms in the oven, you bake it.

For these Brussels sprouts, you want them to be brown and crispy. That’s why you roast them rather than bake them.

Serve your Brussels sprouts with Kohlrabi Soup, Pork Chops with Mushroom Gravy, or Caprese Steak for a well-rounded meal!