Enjoy a classic Sunday dinner for two without the leftovers by cooking Pork Roast For Two in the oven with vegetables and gravy. 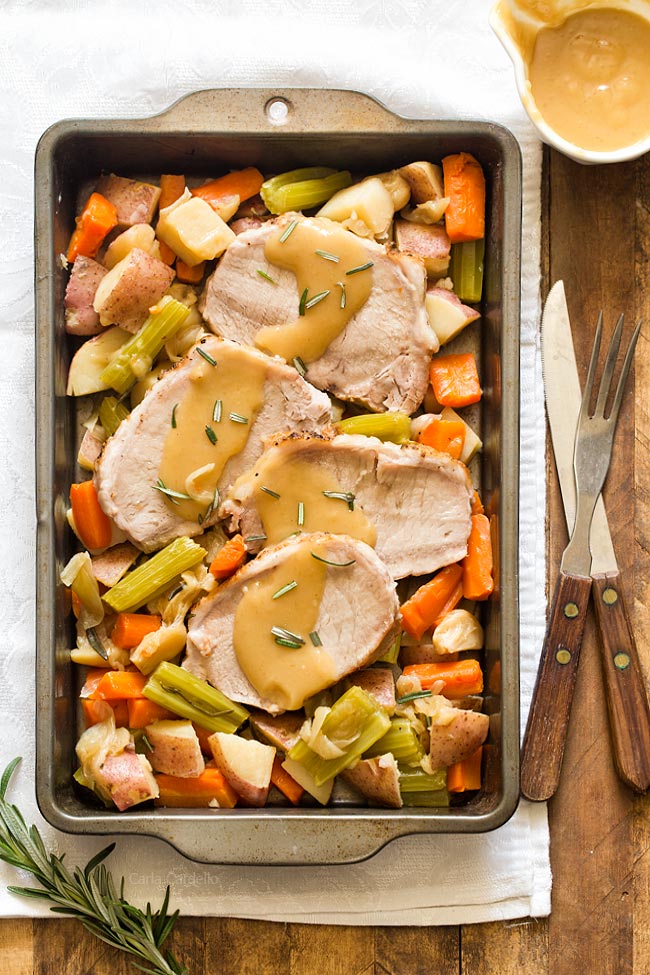 Now I’m going to explain how to make boneless Pork Roast For Two in the oven.

Pork roast with vegetables and gravy is one of those classic Sunday dinners you think of from childhood.

Unfortunately for me, that meant dry overcooked meat.

That’s why it’s important to learn how to make these recipes as an adult because they can taste delicious when seasoned and cooked properly, like my pork chops with mushroom gravy.

For example, this pork loin roast has a beautiful, crispy golden brown crust when roasted properly. If your roast is dry and anemic, you’re doing it wrong. Let me show you how to do it right.

The thing about most roast pork recipes is they serve large families. The thing is I’m not a large family. It’s me and sometimes the cat if he steals my food.

I don’t know about you, but I certainly don’t want to be eating leftover pork all week long.

Sure, I could freeze a few slices, but I don’t have much freezer space (not to mention the accompanying potatoes do not freeze well).

That’s why I developed Pork Roast For Two using 1 pound of meat. Enough for 1-2 people without drowning in leftovers.

It’ll take some time to cook, but it’s ideal for a hearty and comforting Sunday supper or even a Christmas Dinner For Two. 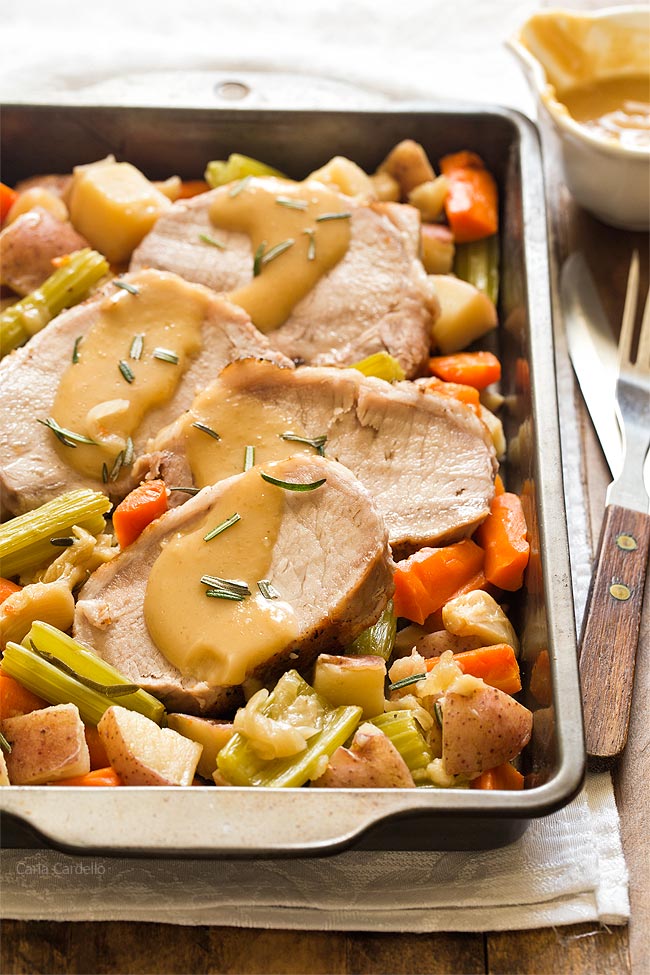 What is the difference between pork loin and pork tenderloin?

Nothing is as frustrating as getting to the grocery store then realizing you have to choose between pork loin and pork tenderloin.

Although the names are similar, the cuts are different and not interchangeable.

Pork loin is wide and thick with a fat cap on top while pork tenderloin is long and narrow with limited fat.

Due to the size and amount of fat, pork loin is best for roasting. If you were to roast tenderloin, it would dry out and overcook quickly.

Pork loin roast can be bought either bone-in or boneless. For this recipe, boneless is best because you’ll be slicing it to serve afterwards.

The hardest part about cooking for two is buying a small quantity of meat.

Due to cost saving, most grocery stores sell pork roasts in 2-3 pound packages. This is too much meat for one dinner, so you have two options:

1 – If your store has a butcher counter, ask them to cut a 1 pound piece.

2 – If your store doesn’t have a butcher counter, buy the smallest roast you can then portion and freeze. This is where a digital food scale (affiliate link) comes in handy so you can divide the meat into equal pieces.

My pork loin weighed about 2.25 pounds. I cut the meat into two equal pieces weighing slightly over 1 pound. Although they aren’t perfect 1 pound pieces, they are close enough to make pork roast for two.

Wrap the extra meat in plastic wrap then place in a freezer bag. Freeze for up to 6 months.

Can I substitute pork shoulder for pork loin?

Although pork shoulder and pork loin are both large pieces, they are not interchangeable due to the amount of fat content; they will cook differently and have different end results.

For the potatoes, I used red potatoes because that’s what I had on hand. However, you can also use gold Yukon or Russet. I usually don’t peel red or gold potatoes, but I do for Russet. 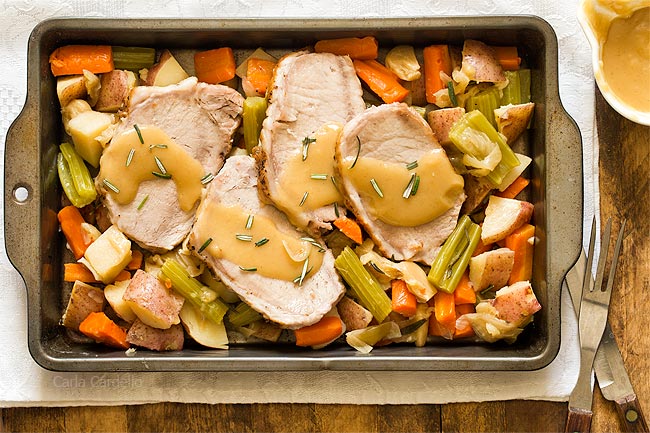 How to cook a pork roast in the oven

First, heat some oil in a large skillet because you want to sear the pork on all 4 sides.

Browning your pork will add another layer of flavor, giving it more depth by caramelizing the surface.

Once the pork is done, transfer it to a plate then drain the excess oil from the skillet.

Next, add the broth and scrape any brown bits left behind from the pork. Again these brown bits add extra flavor to your dinner.

Do you cover a pork roast in the oven?

No, you don’t need to cover a pork roast in the oven. Roasting it uncovered allows the outside to develop a nice golden brown crust.

If you were to cover with foil, the outside will remain gray and soggy.

How long does it take to cook a 1 pound pork roast to cook?

Because a 1 pound pork loin roast isn’t large, it only takes 35-40 minutes. The pork is done when the internal temperature is between 145F-165F. 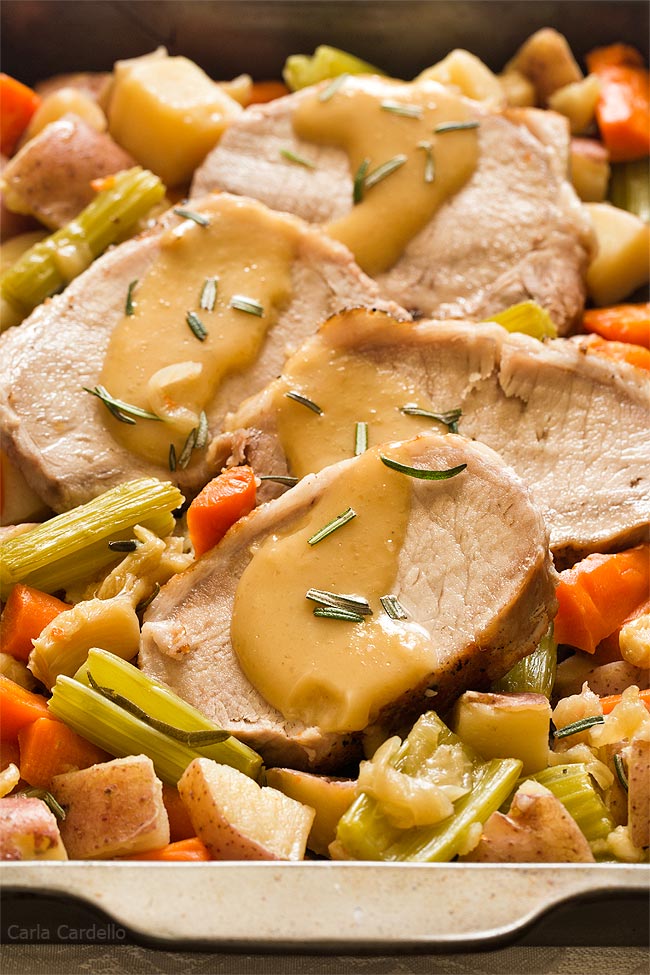 How To Make Gravy With Pan Drippings

While the pork roast is resting, you can make pan gravy with meat drippings.

Because this is a small roast, you won’t get a ton of drippings. However, it’s enough to make some kick-ass gravy.

It’s best to make the gravy in the same roasting pan you used for the meat. This allows you to scrape the bottom and sides of the pan for any delicious brown bits left behind.

However, if you don’t want to heat the pan directly on your stove, you can transfer everything to a saucepan.

Add some butter to the drippings so there’s enough fat in the recipe.

Once melted, stir in the flour to form a roux (paste). This is what will thicken your gravy. Cook for 1 minute to help cook out that raw flour taste.

Now slowly stir in the broth. Bring to a boil then cook until thickened, about 5 minutes. Stir in the milk and any juices accumulated from the pork resting.

Taste and add more salt if necessary. I added 1/4 teaspoon kosher salt, but this could vary depending on how salty your broth is and what type of salt you’re using.

Once your gravy is done, serve it with the pork and vegetables.

Own a pressure cooker? Check out my Instant Pot Pork Roast For Two recipe.