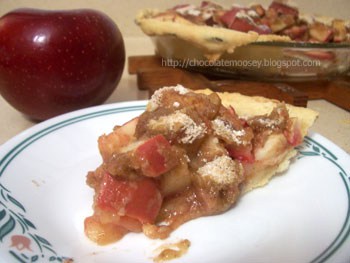 Ok so really I baked this pie back in October after I went to an apple festival, but I love this picture so much, I couldn’t let it sit on my laptop any longer. I used Roma apples, which are delicious on their own. This is considered French Apple Pie because there is a topping rather than another crust on top. I’m getting better at making homemade crusts. Now if I can just make it a circle so it actually fits the plate haha

2. Combine sugar, flour, salt, zest, nutmeg, and cinnamon. Place half of apples in pie shell. Squeeze 1 Tbsp juice on top. Top with half of sugar mixture. Arrange the rest of the apples on top. Repeat with juice and sugar mixture. Dot with butter.

3. Blend together topping ingredients with fork until crumbly. Sprinkle over pie. Cover with foil and bake 20 minutes. Uncover and bake another 20 minutes.