This creamy and easy Pumpkin Cheesecake recipe with a homemade graham cracker crust is a must-make Thanksgiving dessert and a great way to use up leftover canned pumpkin. 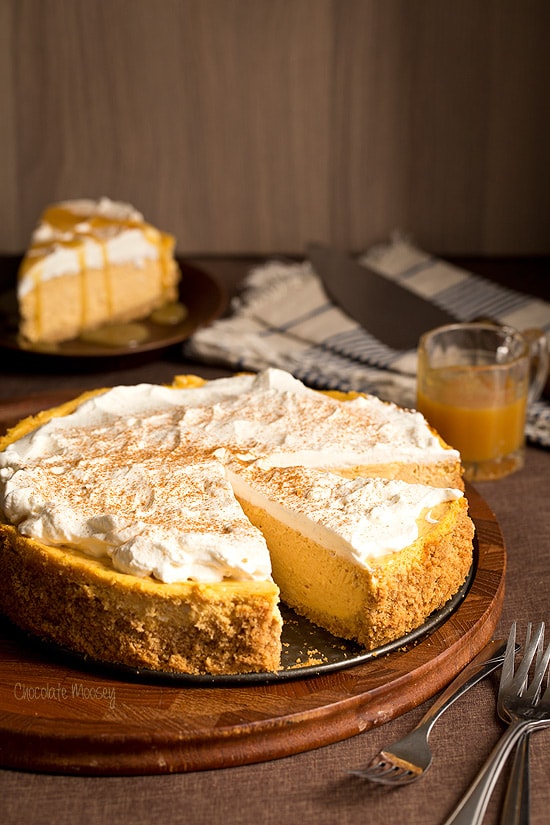 One month from now, we’ll be celebrating Thanksgiving.

When I walked around the mall, I noticed all of the stores are decorated for Christmas already.

Christmas trees standing tall with decorations for sale. Mannequins wearing holiday sweaters and boots. A sign sitting in the kitchen store window, warning us how many days we have left until Thanksgiving and Christmas (poor Halloween).

The mall itself hasn’t gotten ready for Santa yet, but give it another week or two and the mall will be transformed into a winter wonderland.

As long as I don’t hear Christmas music before Thanksgiving, I’ll be set.

Every Thanksgiving, I’m not allowed to make dessert. Me, of all people, can’t make dessert for the family because Dad insists he will make the pumpkin pie.

Every year I tell him to scale down the recipe to make one pie. Every year he ignores me and makes two pies because both will eventually get eaten.

He’ll even do a test run the week before even though he’s been using the same recipe for the past how many years now. You know, just in case this is the year it fails. Every year.

Since I’m not allowed to make Thanksgiving dessert, I have to make all of my pumpkin desserts ahead of time to enjoy the season.

Since I make cheesecake a lot including my pecan pie cheesecake, it was only fitting I make a homemade Pumpkin Cheesecake with a graham cracker crust made from scratch.

I do have a no bake pumpkin cheesecake recipe, so it was about time I made a baked version.

Whether you make this recipe for Thanksgiving dessert in lieu of pumpkin pie or have leftover canned pumpkin to use up, one bite and this pumpkin cheesecake recipe will be your new holiday favorite.

If you’re looking for a small cheesecake, check out my 6 inch pumpkin cheesecake recipe. Same recipe, just adjusted for a smaller pan size. 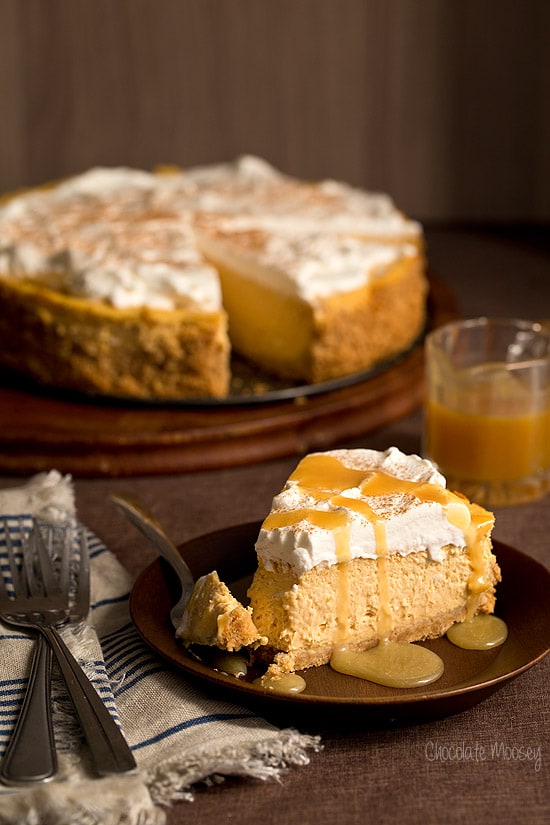 How To Make Pumpkin Cheesecake

I love this particular cheesecake recipe because it isn’t fussy. You don’t need a waterbath nor does it crack unless you bake it too long.

First things first – bring all of the ingredients to room temperature. The cream cheese should be softened and not cold to the touch. If it is after sitting out for a bit, you can microwave it in 5-10 second increments (without the foil wrapper! Do not microwave the foil wrapper).

If the ingredients, especially the cream cheese or eggs, are too cold, the batter will seize up and become lumpy. And you don’t want a lumpy cheesecake.

Make sure you use full-fat cream cheese as fat free cream cheese tends to be too runny, resulting in a cheesecake that may not set up correctly.

How To Make A Graham Cracker Crust

The easiest way to make graham cracker crumbs is to use a food processor (Amazon affiliate link).

However, if you don’t have a food processor, you can place the graham crackers into a freezer bag and crush them with a rolling pin.

Next, mix the crumbs with melted butter. Make sure everything is coated and sticking together.

Press the crumbs into the bottom and up the sides of a 9 inch springform pan (Amazon affiliate link).

You don’t need to prebake the graham cracker crust for cheesecake, so set it aside while you work on the cheesecake filling.

Do you need a water bath for cheesecake?

No, you don’t need a water bath for cheesecake. At least not for this pumpkin cheesecake recipe.

Although water baths can be useful, I’ve made this recipe enough times to ensure you your cheesecake won’t crack as long as you don’t overbake it.

One less hassle for your cheesecake making. 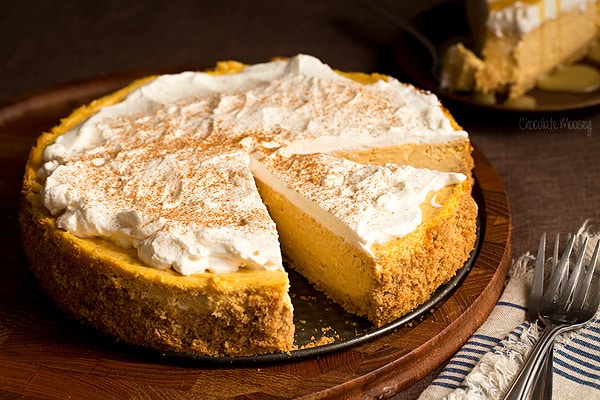 Why did my cheesecake crack?

Because you don’t need a water bath, your cheesecake is slightly more prone to cracking. However, if you understand why cheesecake cracks, then you can prevent it from happening in the first place.

First reason is you overbaked your cheesecake, causing it to dry out and crack. This happens because you couldn’t tell when it was done.

Cheesecake is a custard not a cake so it will forever jiggle in the middle when you move it. No matter how long you bake it, the movement will not go away.

Cheesecake is done when it’s firm to the touch and only a small circle in the center jiggles when moved. If a large portion is moving, you can put it back in for another 5 minutes. Don’t use a knife to check as the hole left behind may cause cracking.

Another reason your cheesecake may crack is your pan is too small. Cheesecake batter will rise in the pan thanks to the eggs.

If your pan is too small, the batter may rise above your pan. As it cools, it’ll sink back into itself, which causes cracking.

How do you fix a cracked cheesecake?

Although your cheesecake shouldn’t crack, let’s say you baked it 5 minutes too long and it cracked. Now what?

The easiest way to fix a cracked cheesecake is to cover the evidence. Once you garnish with homemade whipped cream, nobody will ever know.

How do you make a cheesecake look good?

Usually I don’t garnish my cheesecake, but whipped cream was calling my name.

Then I dusted the top with some cinnamon then drizzled a bit of caramel sauce on top. 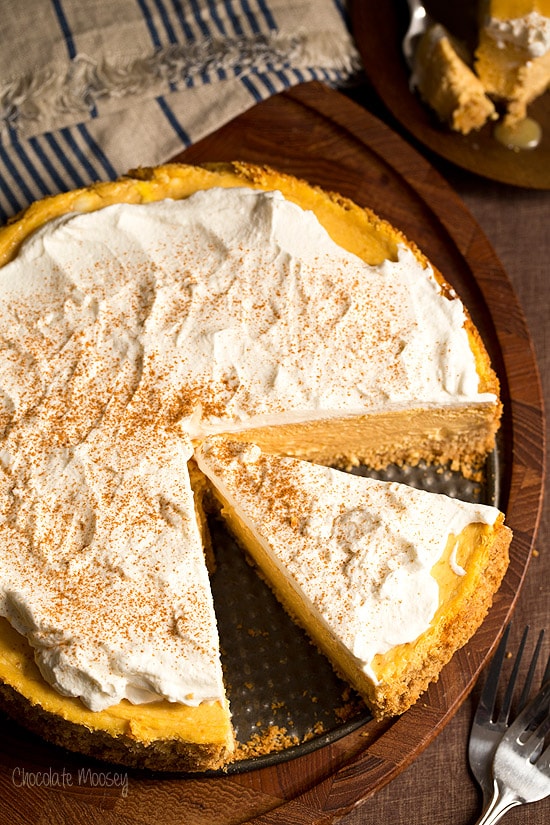 You won’t use a whole can of pumpkin for cheesecake, so here are some more recipes to use up leftover pumpkin:

If you’re looking for a small cheesecake, check out my 6 inch pumpkin cheesecake recipe.