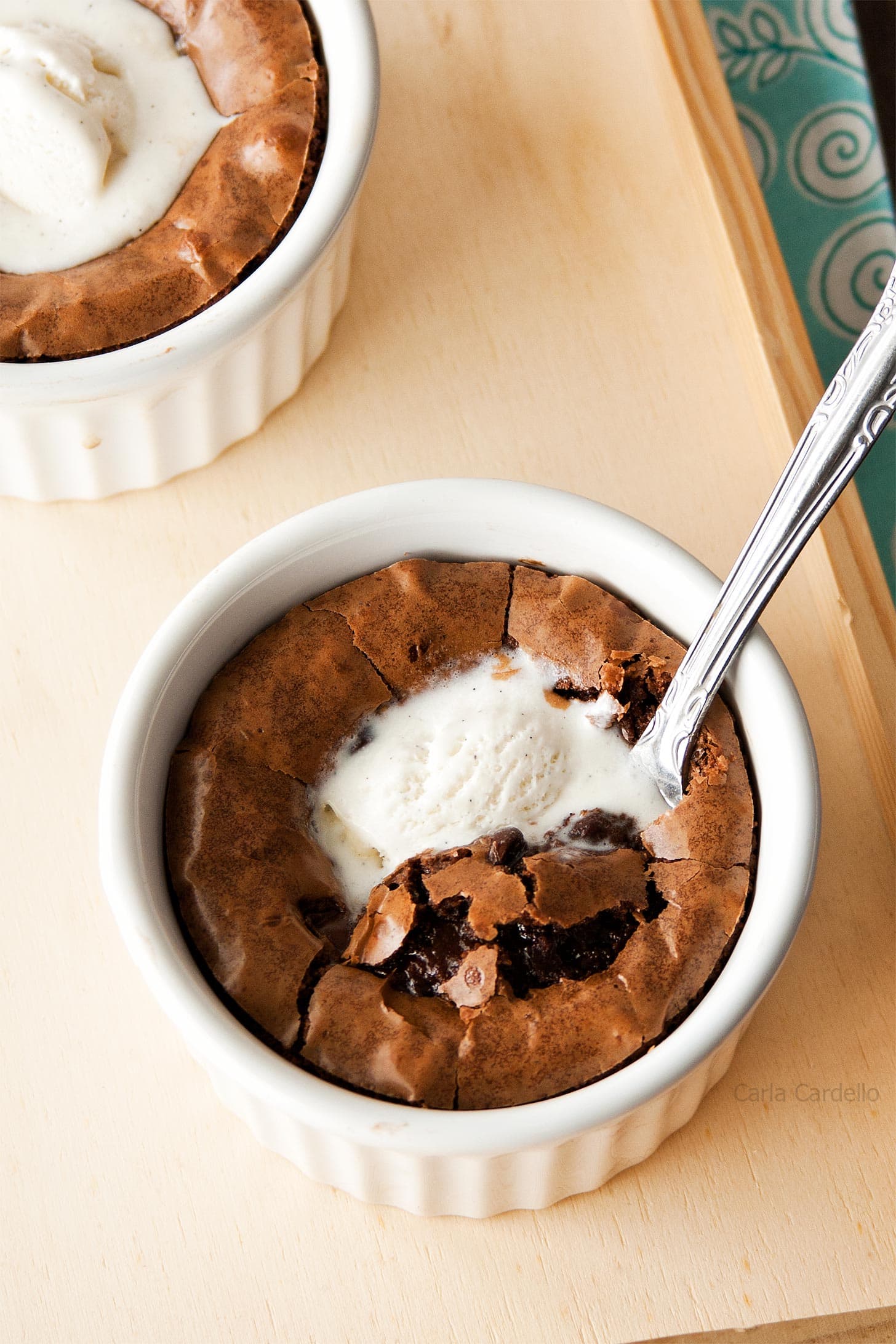 Sometimes I can’t think of anything to say, which is why most people perceive me as quiet.

I’ve been struggling to come up with this post for these Brownies For Two.

Sure, I could’ve been mainstream and said this is the perfect romantic dessert for two to end your Valentine’s Day dinner because it’s decadent and only makes two brownies.

Or I could’ve boo hooed about how I’m alone and plop myself on the couch eating both of these while watching sappy romantic movies and crying in between bites.

But neither are true. I have no date and I’m not going to cry.

So here I am back to square one with nothing to say except these Brownies For Two are so rich and decadent, it’s every chocoholic’s dream.

Serve your ramekin brownies to end your Romantic Dinner For Two At Home. 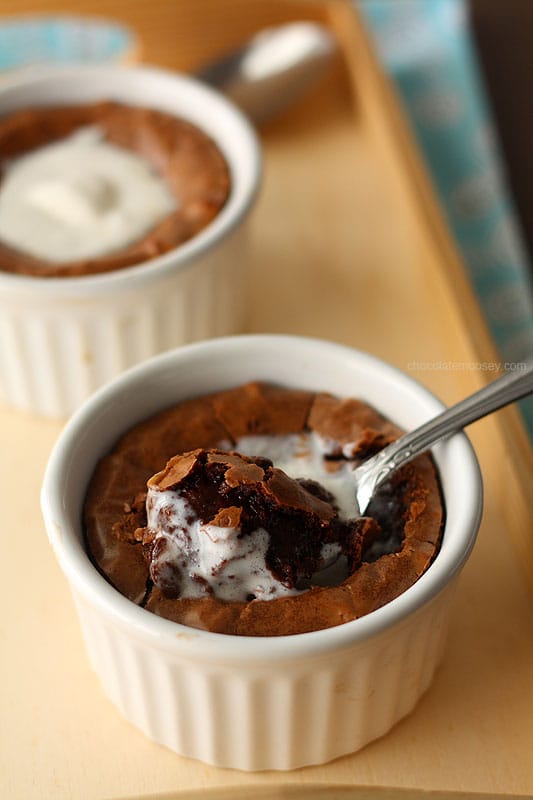 Ramekins are round ceramic baking dishes with a fluted exterior. They’re the perfect vessel to serve individual desserts, such as my Single Serve Brownie.

Deep dish brownies get their name because they’re much thicker than average brownies when baked in ramekins.

I used two 6-ounce ramekins. You can buy a pair online at Amazon (affiliate link) or find some at a thrift store.

After you buy yours, be sure to check out my full list of Ramekin Dessert Recipes.

The brownie batter is filled to the top, so don’t use anything smaller. Because it’s so full, it’ll rise then sink in the middle.

Normally when this occurs, I’d reduce the batter amount. However, when I did, it was missing that ooey gooey chocolatey goodness you got from overfilling, almost like an underbaked brownie.

After testing, I decided to purposely keep the underbaked brownie texture.

Don’t have ramekins? Check out my recipe for Peanut Butter Brownies baked in a loaf pan. 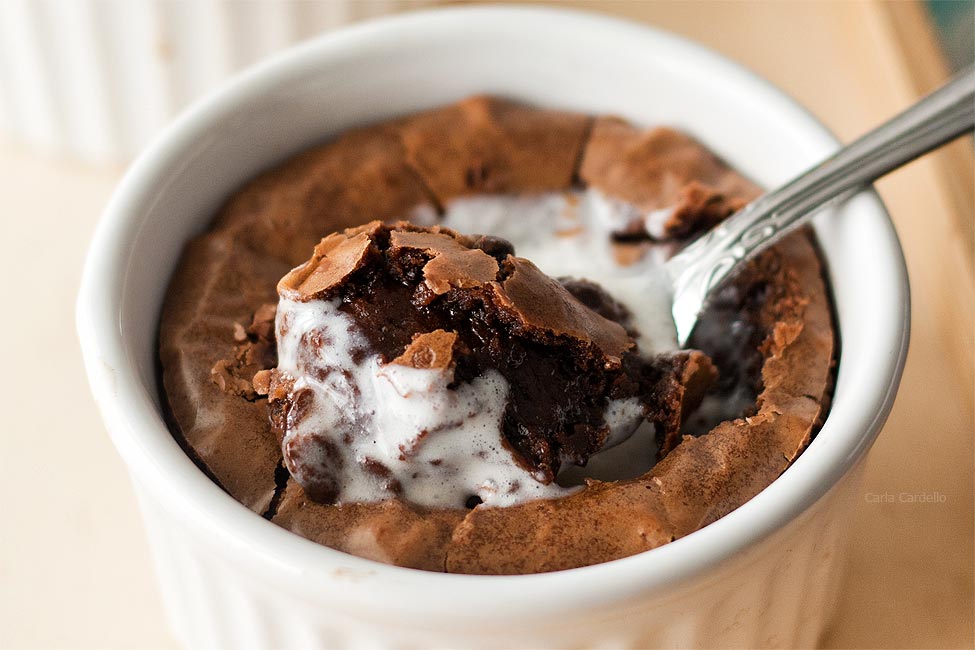 The ingredients for deep dish brownies are:

How To Make Brownies For Two

To make brownies for two, first melt your butter and chocolate chips together in a large saucepan.

Once melted, remove from the heat and whisk in your cocoa powder, sugar, and salt. At this point your batter will look grainy. Don’t fret!

Next beat in your egg and vanilla. At this point your batter should smooth out and stop looking grainy.

Switch to a rubber spatula and gently stir in your flour until everything is moistened. Be careful not to overmix.

Divide the batter between two ramekins then add a few chocolate chips to the center. This will amp up the gooeyness factor!

Bake at 350F for 20 minutes or until the tops look done. Cool for 15 minutes before serving. 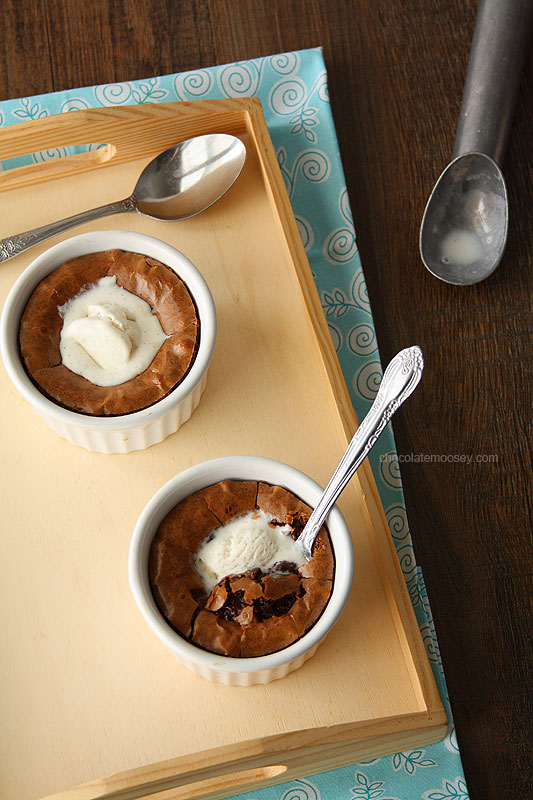 What do you serve with brownies for two?

Yin and yang. That’s how chocolate and vanilla works.

You either love chocolate or you love vanilla. Very rarely do you see someone go crazy over both individually.

But pair them together and you have another story. That’s why you often see vanilla used in chocolate desserts.

Ever make a super chocolatey dessert, only to find it lacking some oomph? Add some vanilla extract. Suddenly the chocolate seems to pop more in flavor while the vanilla helps balance the richness.

It’s also why most chocolate desserts are served with vanilla ice cream. Not only does the cold contrast nicely with the warm brownie, the flavors balance each other out.

Imagine serving warm gooey brownies with chocolate ice cream. About halfway through, the dessert becomes too rich to finish. Serve it with vanilla ice cream, and it’s gone in no time.

Try your hand at making a pint of Homemade Vanilla Ice Cream, but there’s also no shame in buying a carton either. 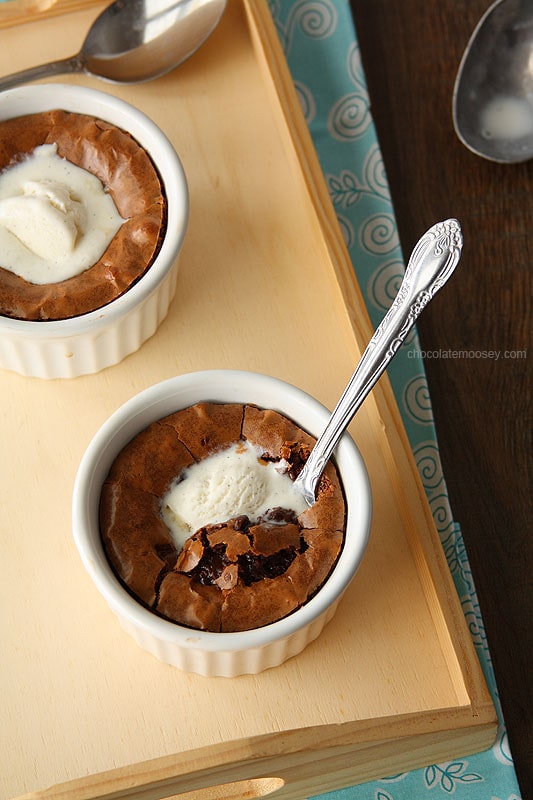 How To Freeze Ramekin Brownies

Sometimes you need to make your brownies for two ahead of time. Or maybe you’re single and want to save the second brownie for a future dessert.

To freeze deep dish brownies, first freeze the ramekins for an hour. This will prevent them from falling apart since they are gooey.

Once frozen, remove them from the ramekins by running a knife around the edge and loosening them up.

If they won’t loosen, run the ramekins under warm water for a few seconds, like you’re unmolding popsicles.

If that still doesn’t work, let them come to room temperature then try again.

Wrap each one in plastic wrap then place in a freezer-safe plastic bag. Freeze for up to 3 months.

When ready to eat, let them thaw at room temperature then eat as it or microwave for 10-15 seconds.

If you enjoyed these individual brownies, then you’ll also love these other ramekin dessert recipes: