Learn how easy it is to make Homemade Chocolate Whipped Cream from scratch! With only 4 ingredients, 5 minutes of whipping time, and no leftovers, you’ll never buy canned whipped cream again. Makes a small batch of whipped cream for two servings. 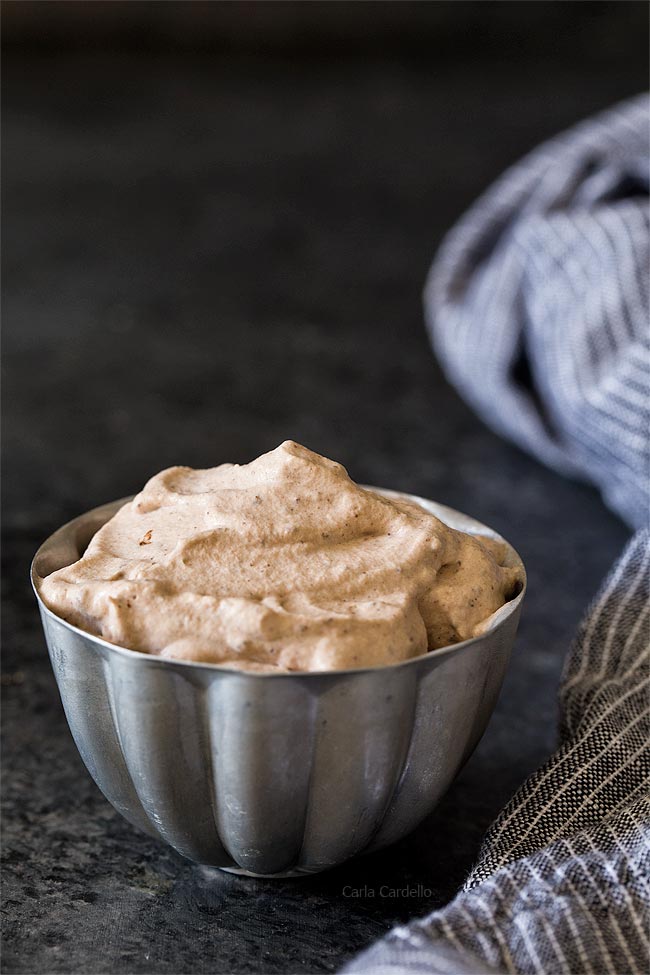 I don’t think I’ve blogged chocolate whipped cream before, which is a shame because it’s so easy and delicious.

You don’t even have to melt chocolate. Add some high quality cocoa powder and voila – another way to add chocolate to your dessert.

It’s not too sweet either, which is the perfect companion for sinfully rich desserts where you need something light to cut through all of the decadence.

You don’t even need to buy chocolate whipped cream from a can! With only 4 ingredients and 5 minutes of whipping time, you’ll never buy canned again. 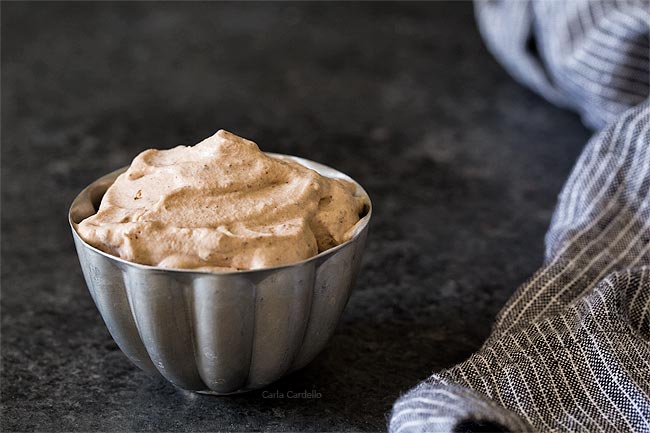 Although both produce airy whipped cream, heavy whipping cream has 36% milk fat, which whips better and holds its shape more.

Whipping cream only has 30% milk fat, so it’s a little lighter and a little more time sensitive. That means it won’t last as long before it deflates.

If you’re serving it right away, especially if it’s going to melt on hot chocolate, using either type of cream will work.

However, if you need it to last longer, such as on top of a pie, you’ll want to use heavy whipping cream. 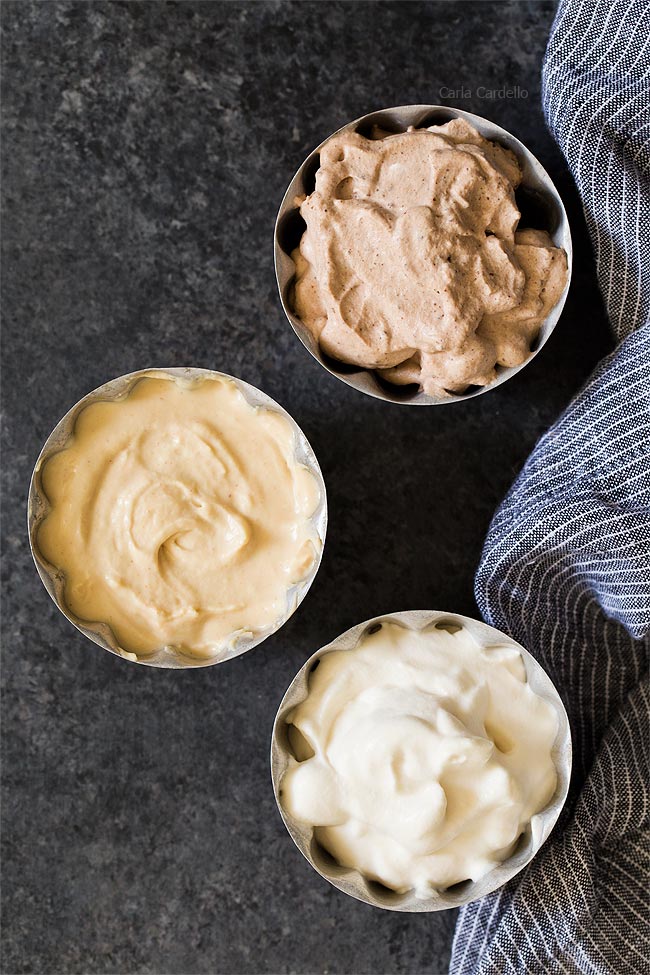 It’s much easier (and faster) to keep a pint in your fridge and make your own than run to the store.

First, you want to start with cold cream, a cold beater, and a cold bowl. But I have a confession:

I never chill my beater or bowl before whipping.

Starting with a cold bowl certainly helps, but truth is I never remember until I actually start to make it, then I get too impatient and lazy to wait an extra 15 minutes to chill.

I feel like I’m committing a cardinal kitchen sin admitting that, but I’m keeping it real. 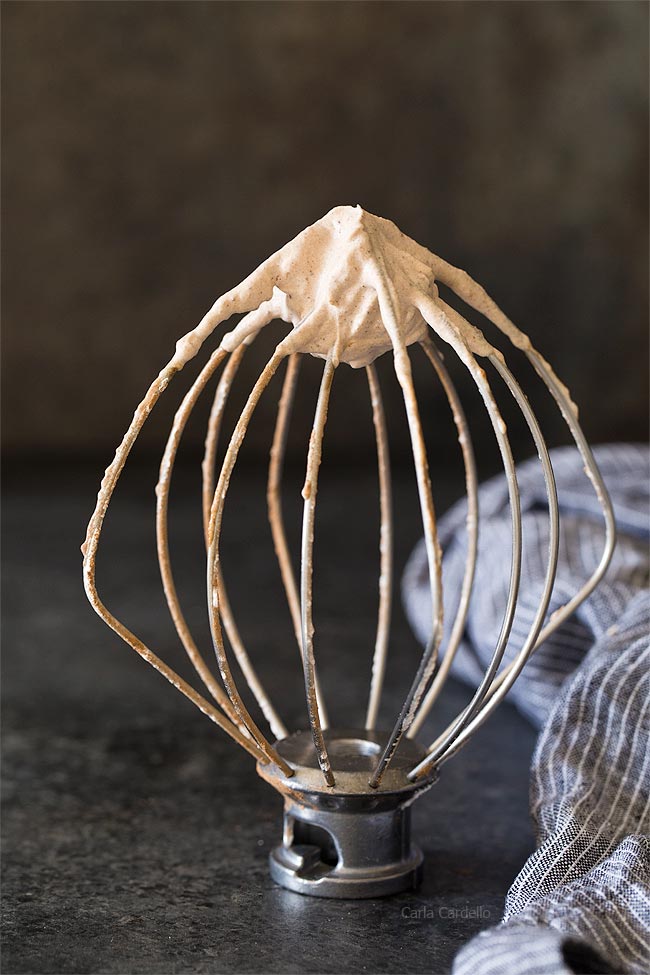 Next, you want to start beating both the cream and cocoa powder on high speed until the cream starts to thicken.

Make sure you’re using high quality cocoa powder. Since there are such few ingredients, you’ll really taste the quality of what you use.

At this point, gradually add the powdered sugar and vanilla to sweeten up the cream.

Keep beating on high speed until stiff peaks start to form. This means when you pull the beater straight up, peaks will form in the cream and will not fall over.

This takes anywhere from 3-5 minutes, depending on the speed of your mixer (or your arm muscles). 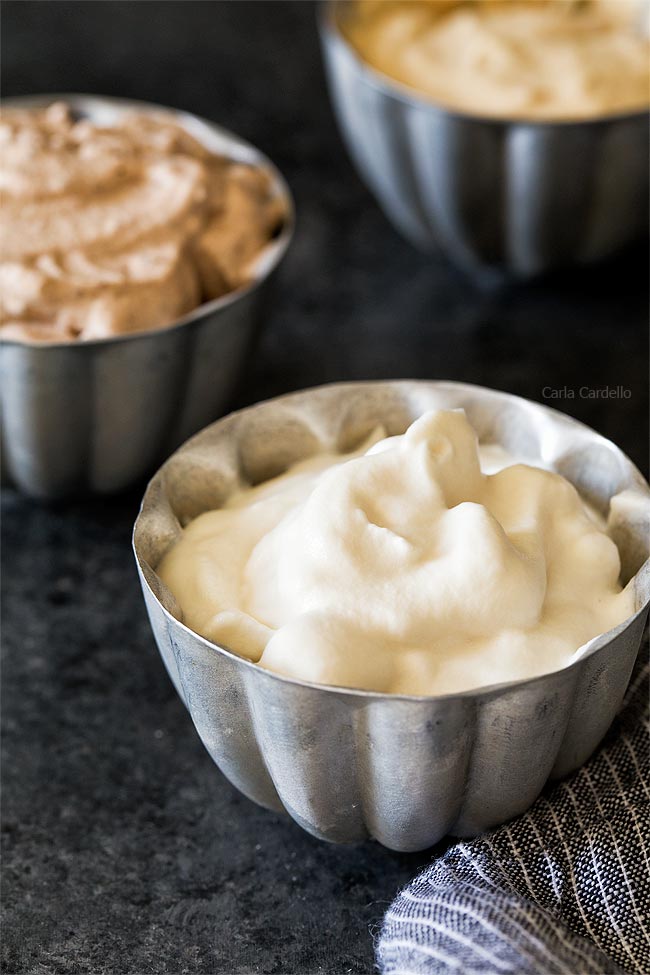 As I mentioned earlier, I got tired of throwing out leftover whipped cream. That’s why I opted to share my small batch recipe.

With 1/4 cup heavy whipping cream, you can still whip it up in a 5 quart stand mixer bowl with your whisk attachment. That’s the method I prefer.

However, I had a few readers tell me their bowl is too large for such a small amount. If this is the case, you can use a smaller bowl and a hand mixer.

I find using a hand mixer doesn’t whip in as much air, but you won’t notice when you serve it (unless you’re serving it next to cream that was made in a stand mixer).

If you find yourself without a mixer, you can certainly whip the cream by hand with a whisk. Not only does this build arm strength, the whipped cream will taste better since a lot more love (and sweat) went into making it.

You’ll have about 2 servings of whipped cream for 1/4 cup heavy whipping cream, ideal for dessert for two.

You can cut that amount in half to literally only 1 serving, but you’ll need to use a hand mixer because the stand mixer bowl will be too big for 2 tablespoons cream.

Homemade chocolate whipped cream can be made in advance because it’ll last about 1-2 days in the refrigerator. It will deflate as it sits, but it’ll be fine to spoon alongside some dessert.

Portion the whipped cream onto a cookie sheet (either piped or spooned), freeze until firm, then transfer them to a freezer-safe bag.

Now that you made homemade chocolate whipped cream, here are some the desserts you can serve with it: