Make comfort food for dinner faster by learning how to make Instant Pot Beef Stew For Two! The meat melts in your mouth along with carrots, peas, and potatoes. 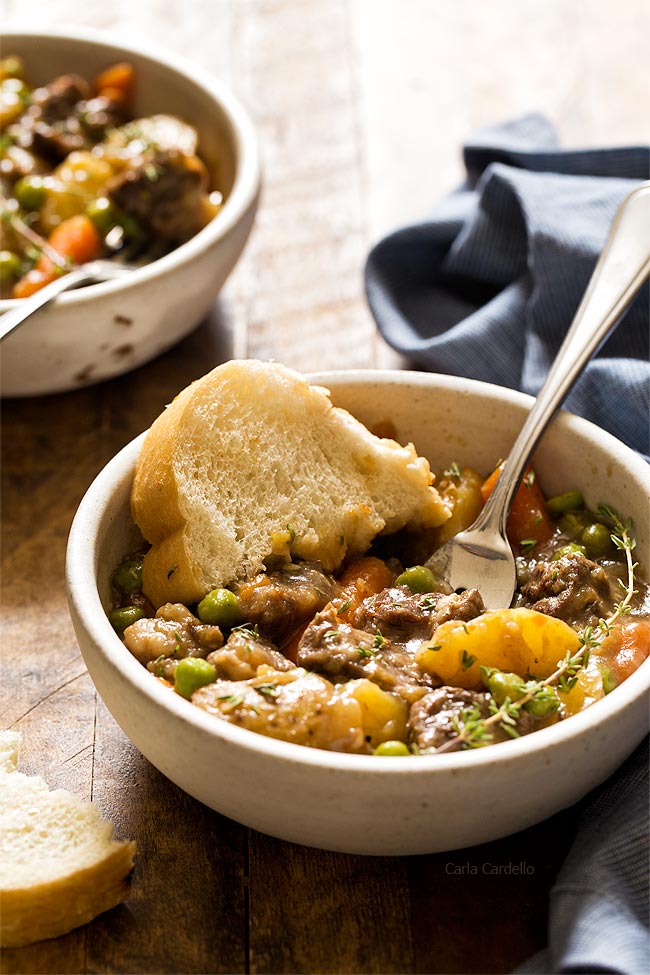 With the temperatures finally dropping to sweater weather along with annoying dreary rain, it’s time to cozy up to your favorite comfort foods!

The problem is a lot of comfort foods, especially ones involving tough cuts of meat, take several hours to cook. Luckily there’s a way to cook them in almost half the time.

You may have heard of an Instant Pot, but do you know what it is? It’s a pressure cooker designed to cook food faster using steam pressure.

Pressure cooking isn’t new to the culinary world, but most home cooks have never used one, myself included.

In fact, I was a little scared at first because I didn’t want to burn myself or have the machine explode.

However, you’ll learn quickly once you understand how the safety valve works, it’s quite easy.

At first I was reluctant about owning an Instant Pot, thinking it was a trend that’ll die soon. However, a client requested a recipe, so now I own this giant machine. Seriously, it’s huge and my cat J tried sitting in it.

(Side note – Thanks to the steam being released, J is absolutely terrified of it now. Even plugging it in makes him run because he knows what’s coming).

After making a few more recipes, I think I’m in love. I asked you on Instagram whether you’d be interested in small batch Instant Pot recipes.

Most of you said yes, so I’m going to start out with an easy and often loved recipe – Instant Pot Beef Stew For Two.

I’m also going to answer questions, like what is an Instant Pot and why you should (or shouldn’t) buy one.

If you don’t have an Instant Pot, don’t worry! I also published my Stovetop Beef Stew For Two recipe in a separate post. I understand owning a giant appliance may not feasible for everyone, whether you have a tiny kitchen or can’t splurge on one.

Make sure you tell me in the comments whether you want more recipes. If I get a great response, I’ll keep making more. If not, I won’t make it a priority. 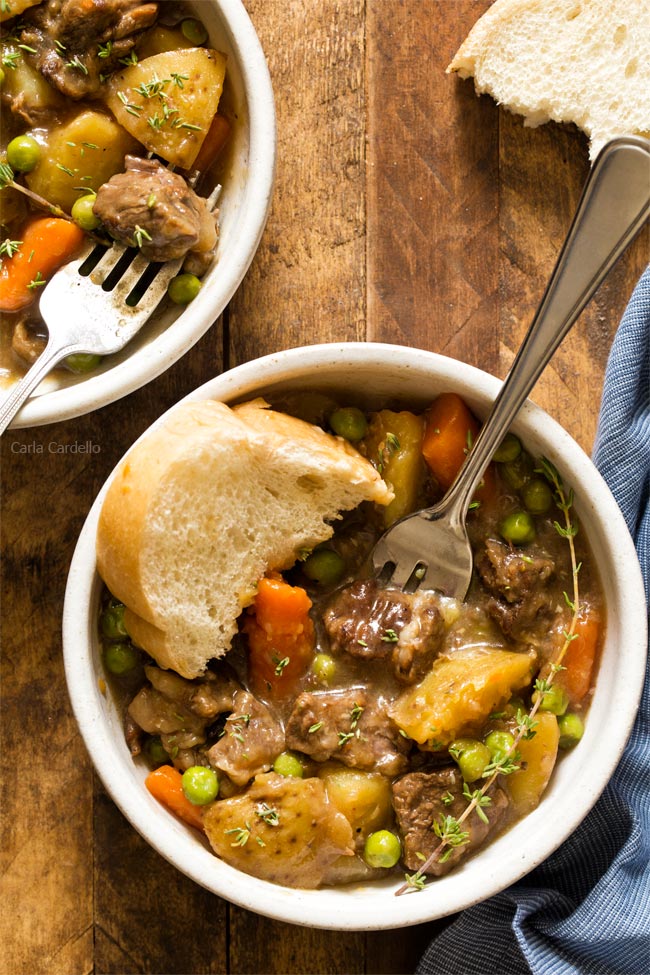 Why buy an Instant Pot?

For example, if you cooked this Beef Stew For Two recipe on the stove, it would take you almost 2 hours until the meat is tender. In the Instant Pot, it takes about 30 minutes for the meat to melt in your mouth.

The fact I can make beef stew faster without sacrificing flavor is quite amazing.

Unlike a slow cooker, you can sear the meat directly in the pot. This means the meat will have more flavor from the browning.

With a slow cooker, most inserts aren’t stovetop proof, so you have to sear the meat in a separate pan then transfer it to the cooker.

Not only is there an extra dish to wash, sometimes you don’t have time if you’re prepping the slow cooker before leaving for work.

Ready to buy one? I have the LUX60V3 6-in-1 use, which you can buy directly from Amazon (affiliate link). 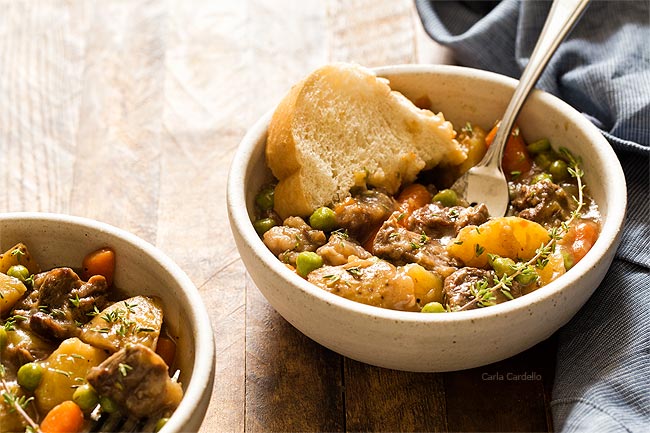 But I have a slow cooker. Why do I need an Instant Pot?

It’s different than a slow cooker because a slow cooker takes about 4-8 hours to cook. If you don’t get your food into the slow cooker on time, you may be eating dinner at midnight.

An Instant Pot cooks a lot faster. In fact, you can come home from work, use your Instant Pot, and have dinner ready in about an hour (prep time pending).

It’s also not a one trick pony appliance. Depending on the model, you have about 6-8 cooking options, including slow cooker.

That means you can still make your slow cooker recipes without using a separate appliance.

What do you hate about the Instant Pot?

Not every appliance is perfect! One downfall is the pot is a little small, so it’s hard to cook giant batches of meat.

Luckily this is a small batch recipe blog, so it’s not an issue for us. It’s also a bit deep, so you have to use tongs instead of a spatula to flip anything.

It’s also hard to check on the meat until the pressure cycle is over, so if your meat isn’t fully cooked in the middle, you have to repeat the cycle.

That means you have to spend extra time waiting for the pressure to build back up before the timer begins. Luckily since the appliance is already hot, it won’t take as long the second time around.

I find the Instant Pot useful for tough cuts of meat that typically take a few hours normally, but for easier things like pasta and rice, I wouldn’t drag out the machine for them. 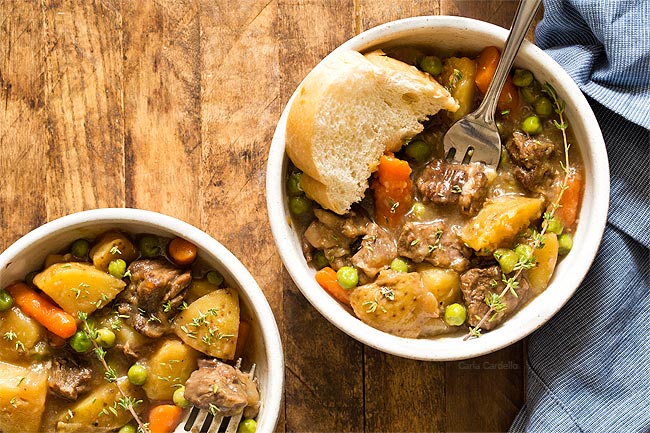 How To Make Beef Stew

Every beef stew has the following ingredients – carrots, potatoes, peas, onion, garlic, and of course beef.

For the beef, you want to buy chuck roast and cut it yourself. If you buy the pre-cut stew meat, they usually don’t have enough fat on them for stew. You definitely want some beautiful marbling for flavor.

I used Yukon gold potatoes because that’s what I had on my counter. However, you can use any type including Russet. I usually don’t peel gold potatoes, but I do for Russet.

Don’t forget the Worcestershire sauce! It may seem easy to skip, but it adds an extra depth of flavor to the beef.

Don't have an Instant Pot? Check out my Stovetop Beef Stew For Two recipe instead.