Ham And Cheese Soup without potato is an easy one pot meal that makes a quick weeknight dinner. Great way to use up leftover ham from Easter and Christmas! 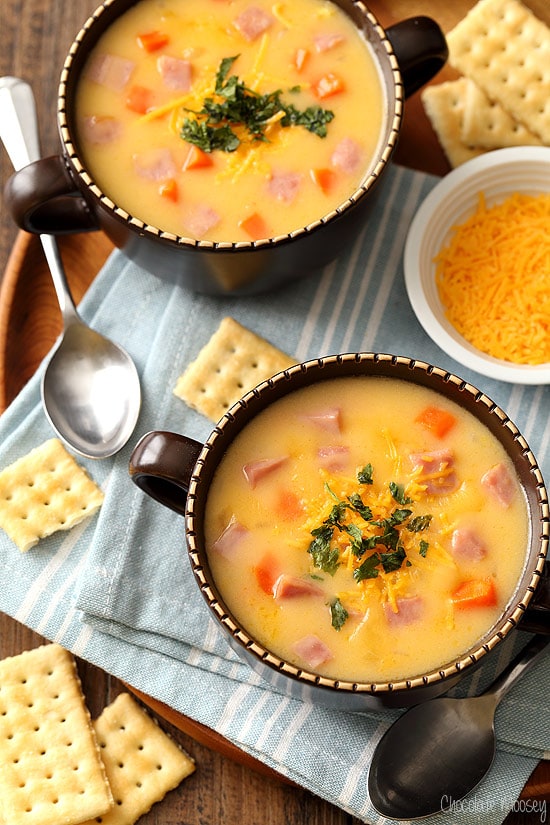 Ever have one of those days where you fall behind and can’t seem to catch up?

Yup that was me. It was a bad week as a whole, one of those I’m-going-back-to-bed weeks because I couldn’t do anything right.

It all started with two separate recipe fails in one day. I managed to squeeze in one more attempt of the first recipe, which finally turned out how I wanted.

Unfortunately, that meant I was falling behind schedule and had yet to clean up before work was over for the day.

By the time I cleaned up, it was already 6 PM and I still had to make dinner (for reference, I usually start prepping dinner around 4-4:30 PM). No frozen pizza in the freezer.

Part of me wanted to order take out, but did I really want to spend $15-$20 on dinner that day? What can I make that’ll not only result in minimal dishes but also be ready soon?

The answer is Ham and Cheese Soup. Everyone loves a good grilled ham and cheese sandwich; why not turn it into a soup?

It’s based off of my trusty one pot soup formula. All you need to do is make a roux (flour paste), slowly whisk in your broth, then add your main ingredients.

Voila – soup in under an hour!

And because ham is pre-cooked (much like my honey glazed ham steak dinner), you save even more time with this ham and cheese soup recipe.

Perfect for when you need an easy weeknight dinner idea after a long busy day. Or you have leftover ham from your Easter Dinner For Two or Christmas Dinner For Two. 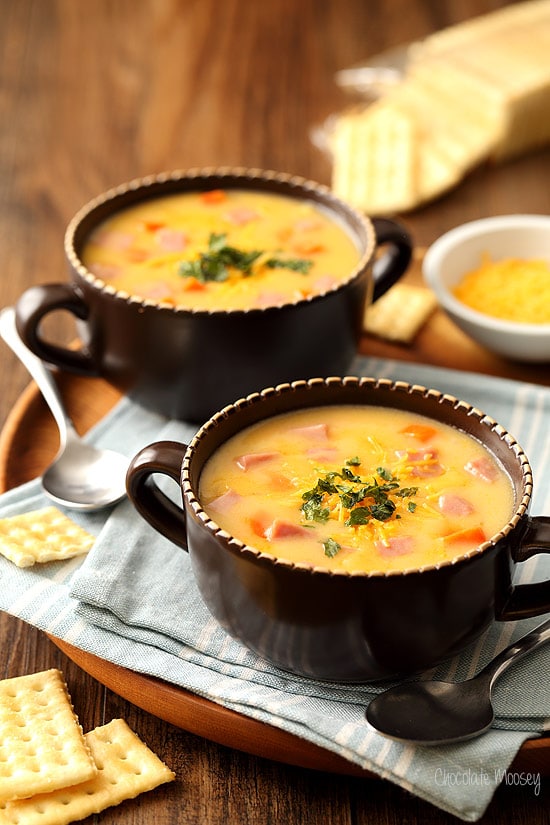 Ingredients For Ham and Cheese Soup

The ingredients to make this easy ham soup are:

Can I use pre-shredded cheese for soup?

For best results, you want to grate the cheese yourself before adding.

That’s because pre-shredded cheese is coated with an anti-caking agent, which means it won’t melt as smoothly.

With that said, I still use pre-shredded cheese when I’m in a hurry. In this case, add the cheese in small batches, making sure the cheese is melted before adding more. This ensures the soup isn’t a clumpy mess in the end.

If you have some cheese leftover, you can also make my Popcorn Soup or Broccoli Cheese Soup. 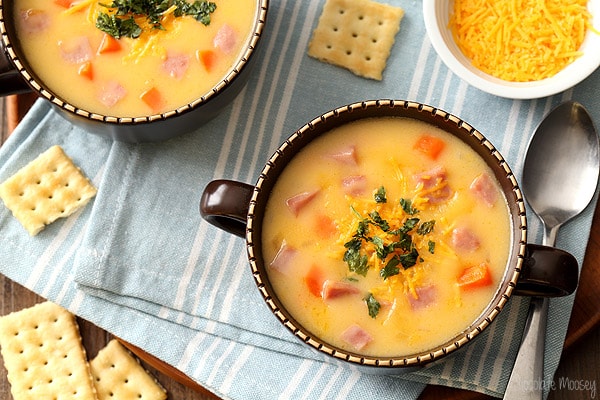 How To Make Ham and Cheese Soup

To make ham and cheddar soup, first melt your butter in a Dutch oven or similar large pot. Once hot, add your onion and carrot then cook until softened then add the garlic.

Next, stir in your flour until everything is coated. This is referred to as making a roux, which is a flour paste used to thicken your soup. Slowly stir in your broth then bring to a boil.

Once boiling, stir in your ham then cook until warmed up, roughly 2-3 minutes. The ham is already cooked, so no need to overdo it.

Remove the pot from the heat then stir in your milk and cheese. Cheese should be added at the last step because high heat will curdle your dairy.

Taste and adjust for seasoning. It’s likely you’ll need some salt, but between the salty ham and broth you may not need to add as much.

Why did my cheese soup curdle?

How To Fix Curdled Soup

If your cheese soup does curdle, don’t panic yet! It’s because your soup got too hot.

First, try adding cold milk and whisk vigorously for roughly 10 seconds. If your soup isn’t too far gone, this method should work.

However, if that doesn’t work you can add your soup to a blender. You may want to use a slotted spoon to rescue the ham before blending.

8 comments on “Ham and Cheese Soup”