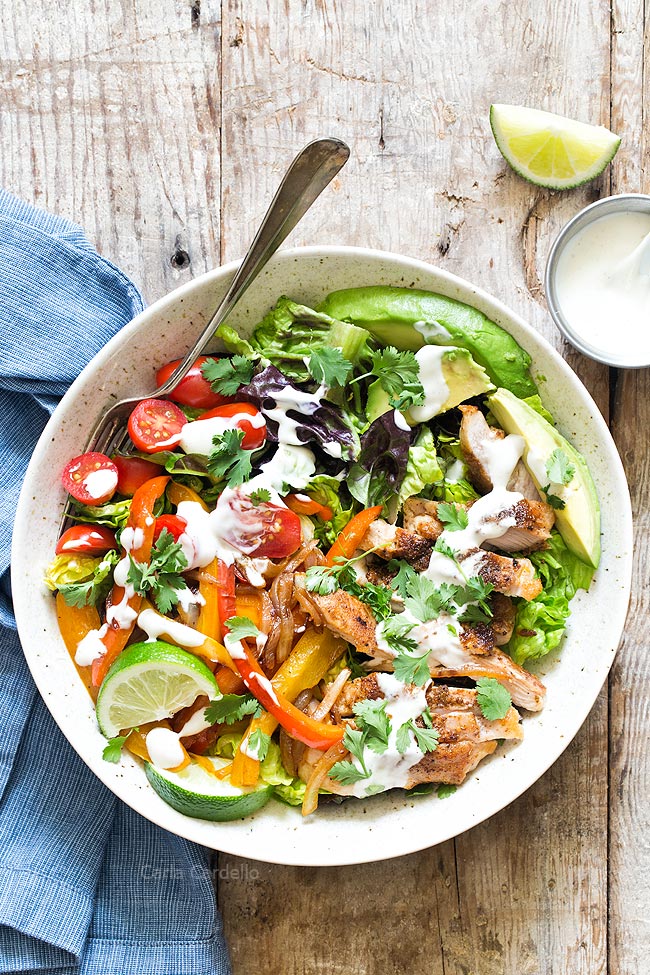 My cat J is OBSESSED with what I’m eating. Especially if it’s chicken.

You see, he’s the world’s pickiest cat. Only eats chicken. Only shredded or pate. Won’t eat chunky. Only certain brands.

And even then he sometimes refuses to eat, only to scarf down his food an hour later because his hunger strike is over.

Sometimes I ask him how in the world he even ate at the shelter before I adopted him.

(And no, he’s not sick because when he finally gives up, he eats all of his food).

My biggest mistake is giving J some of my fresh chicken for him to try. Now he’s constantly in my face when I eat.

If I’m eating at the dinner table, he’s in my lap. If I’m eating on the couch, he’s either on my chest or right next to me with one paw on my leg.

He sticks his face in my salad bowl, steals pizza rolls from my plate, and even tries to intercept my fork as I bring it up to my face.

If I’m slicing steak, he gets SO excited because he thinks it’s chicken. Everything is always chicken until it’s not.

If the air fryer beeps, he runs to the kitchen because he thinks it’s chicken.

If I eat a candy bar from my pantry, he comes running over for a bite because it might be chicken this time.

Twice I left my bowl with this Chicken Fajita Salad unattended then came back with salad all over the floor because he stole a few bites, decided he didn’t like it, then left.

Although it may not be cat approved, Chicken Fajita Salad is definitely human approved; I make it on a weekly basis.

Although to be honest I make it often with steak and not chicken, but because I already brought you my steak fajitas I wanted to give you directions on how to cook chicken fajitas.

That way, you can pick which protein you want to make then decide if you want to serve your fajitas on corn tortillas or as a taco salad.

It’s similar to my Chicken Fajita Pasta but served over lettuce with ranch dressing.

It’s a refreshing dinner to make on a hot summer day. Especially if you’re looking to increase your vegetable intake. 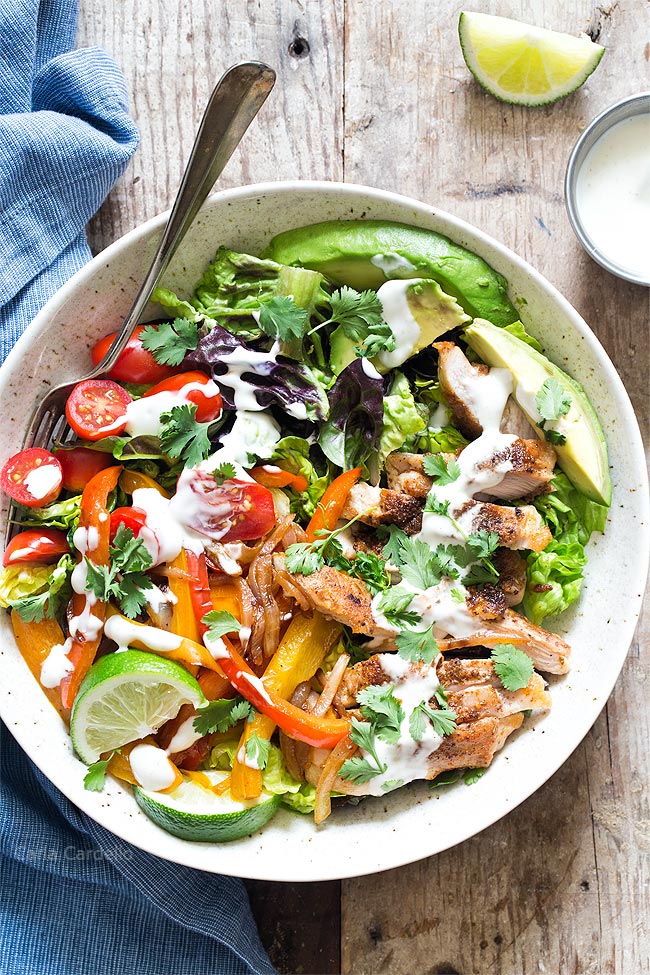 As you can guess by the title, you can also serve fajitas as a taco salad.

Do you need to marinate chicken for fajitas?

For my chicken fajita salad, you do not need to marinate your chicken for fajitas.

Sometimes I’ll use a marinade for steak fajitas to help make the beef more tender, but it’s not necessary for tender chicken.

Instead, I rub homemade fajita seasoning on my chicken before cooking.

If you do want to use a marinade, you can use the same one from my steak fajita recipe. 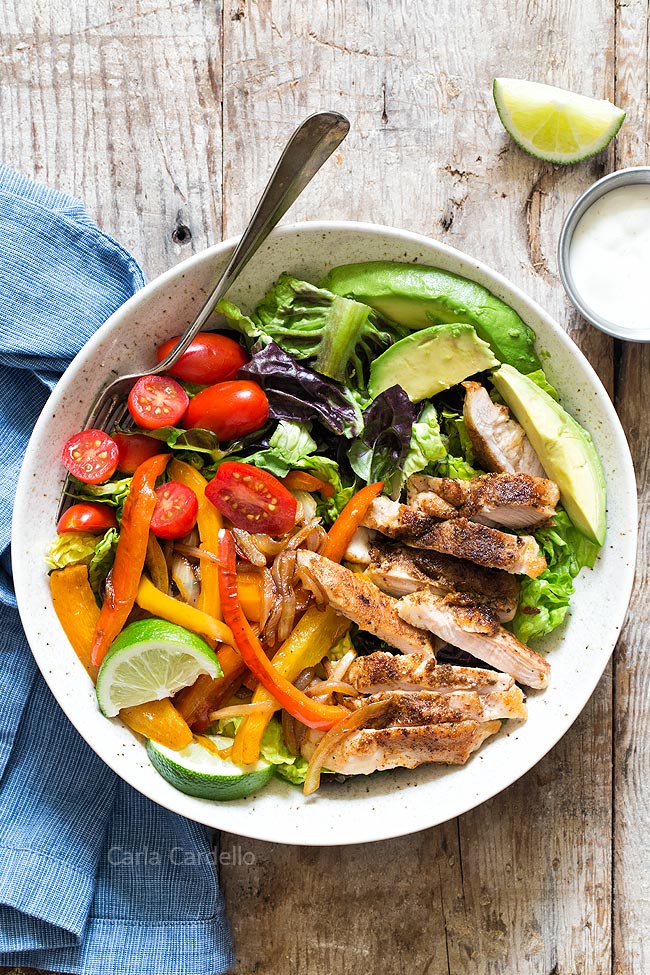 The ingredients for this Chicken Fajita Salad recipe are: 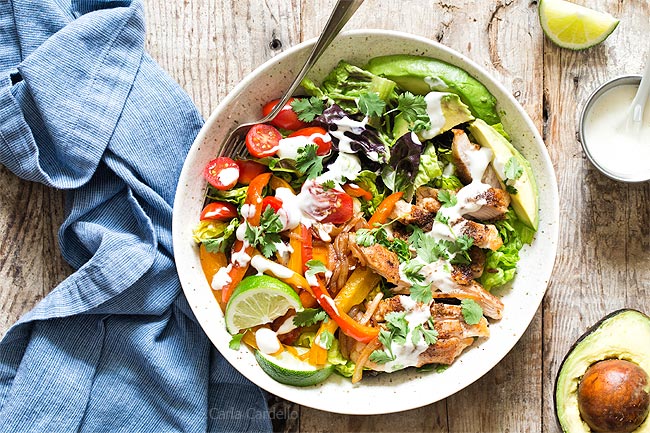 Do you cut chicken before or after cooking for fajitas?

Cutting your chicken before or after cooking for fajitas depends on what type of chicken you’re using.

If you’re using boneless chicken thighs like I did, they are usually really thin when laid out flat. Because they’re so thin, you can cook your thighs as is and cut your chicken after cooking.

However, if you’re using boneless chicken breasts, they are much thicker. If you were to cook them whole, the outside will burn before the middle is fully cooked.

Unless you’re using thin chicken cutlets or you butterfly cut your meat, you want to cut your chicken breast into strips before cooking for fajitas. 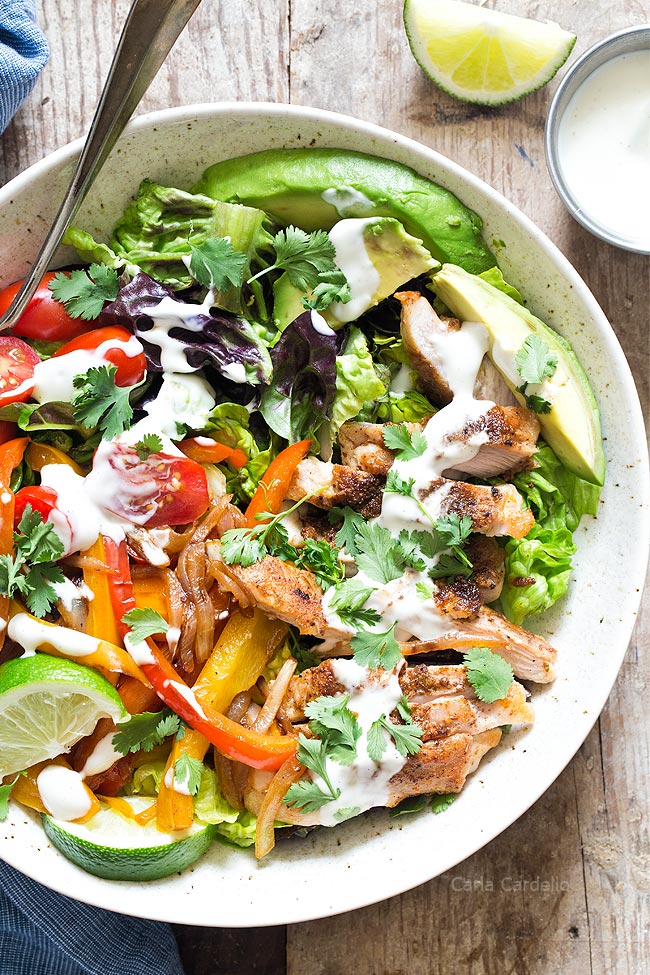 How To Make Chicken Fajita Salad

To make chicken fajita salad, heat your oil in a large 12 inch skillet. While that’s heating, rub your chicken with the fajita seasoning.

Once the oil is hot, add your chicken in a single layer, making sure there’s enough room. If your pan is overcrowded, the meat will steam rather than brown.

Cook for about 3-4 minutes then flip and cook another 3-4 minutes or until the middle reaches 165F and is no longer pink. Transfer to a plate and keep warm.

In the same skillet, add your onion and bell pepper, scraping up all the brown bits left behind. There should be enough oil and seasoning leftover from the chicken, but if not you can add a little more.

Cook until softened and browned, about 8-10 minutes. If any juices from the chicken accumulated on the plate, add it to your veggies.

In a large salad bowl, add your lettuce, avocado, tomatoes, and the cooked vegetables. Slice your chicken and add that as well.

You can also add fresh garden salsa instead of tomatoes or guacamole instead of avocado.

Do you cut chicken with or against the grain?

Whether you cut your chicken before or after cooking, you want to thinly slice it against the grain.

The grain refers to the lines you see in the meat. Cutting against the grain means cutting perpendicular to the grain.

If you cut in the same direction as the grain, your meat will be tougher to chew.

Can you make chicken fajita salad ahead of time?

Yes, you can make chicken fajita salad ahead of time. Well, almost all of it.

Cook your chicken and vegetables then let them cool down. Once cool, refrigerate until ready to serve.

You also cut your lettuce and tomatoes ahead of time, although you may want to wait on slicing the avocado because it’ll turn brown shortly after cutting.

To learn how to pick and cut your avocado, check out my avocado burgers.

Don’t assemble your salad until ready to eat. Otherwise, it may become soggy.

What To Serve With Chicken Fajita Salad

Now that you’re ready to eat your chicken fajita salad, what do you serve with it? Try these recipes: