Hosting Thanksgiving For Two this year? You can still serve up your favorite traditional side dishes, like Sweet Potato Casserole For Two with mini marshmallows and chopped pecans on top. Plus learn the difference between sweet potatoes and yams. 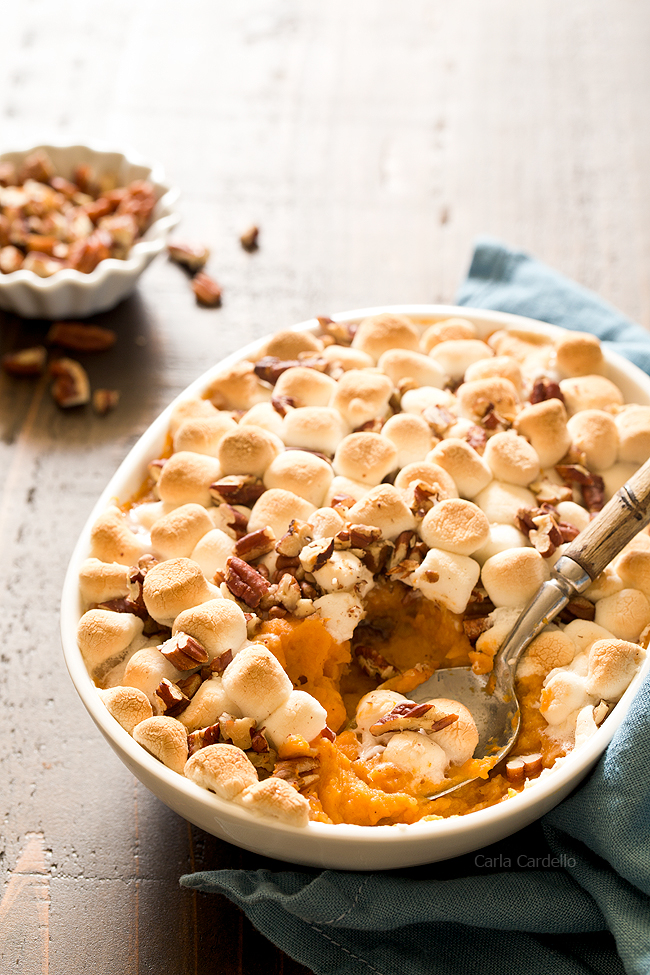 If you watch my Instagram stories, then you probably noticed I no longer live alone.

A few weekends ago I adopted a 1.5 year old brown tabby named Mr. J, J for short. That’s what the shelter named him and didn’t see a reason to change it.

J has been a huge handful. He’s the opposite of my last cat Murray. J is very needy and constantly wants me to hold him and sleep in my lap.

In fact, he jumped from the chair into my arms when I wasn’t holding him. Of course he fell to the floor so hopefully he learns not to do that again.

I can tell he’s calming down and starting to sleep and play by himself. Some days I wonder what I got myself into. Other days I can’t stop smiling when he’s sleeping in my lap.

He tends to roll on his back, which never works in his favor when I’m sitting in a chair. He literally grabs the kitchen table because he’s falling.

It probably doesn’t help I work from home, so I’m almost always around. He even follows me into the studio to work.

Luckily he sleeps under the table in the sunlight, but I do have to make sure there is no cat hair in my shots. 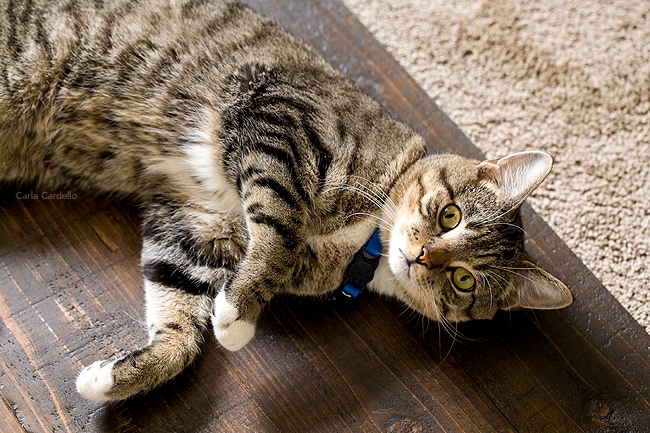 The first recipe he supervised was this Sweet Potato Casserole For Two with mini marshmallows and pecans on top.

With Thanksgiving coming up in a few weeks (!!!), I wanted to make more small batch recipes for anyone cooking Thanksgiving For Two.

Most of these recipes overlap for Christmas Dinner For Two as well.

I scaled it down to 4 servings so you can still enjoy this traditional Thanksgiving side dish if you’re not hosting a large holiday dinner. 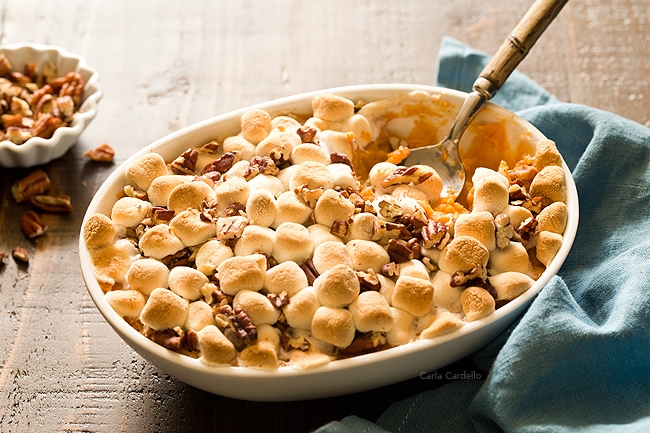 What’s the difference between a sweet potato and a yam?

Let’s talk about the difference between sweet potatoes and yams. Even I was confused about this, so I did some research.

Yams are not orange; their flesh is usually white or cream colored, sometimes even purple. Their skin is brown and bark-like.

A sweet potato can either be golden skin with pale flesh or red skin with orange flesh. When we think of sweet potato, we often think of the orange variety.

TLDR: The chances of you buying a true yam at the grocery store is low. What is often labeled as a yam is actually a mislabeled orange sweet potato. 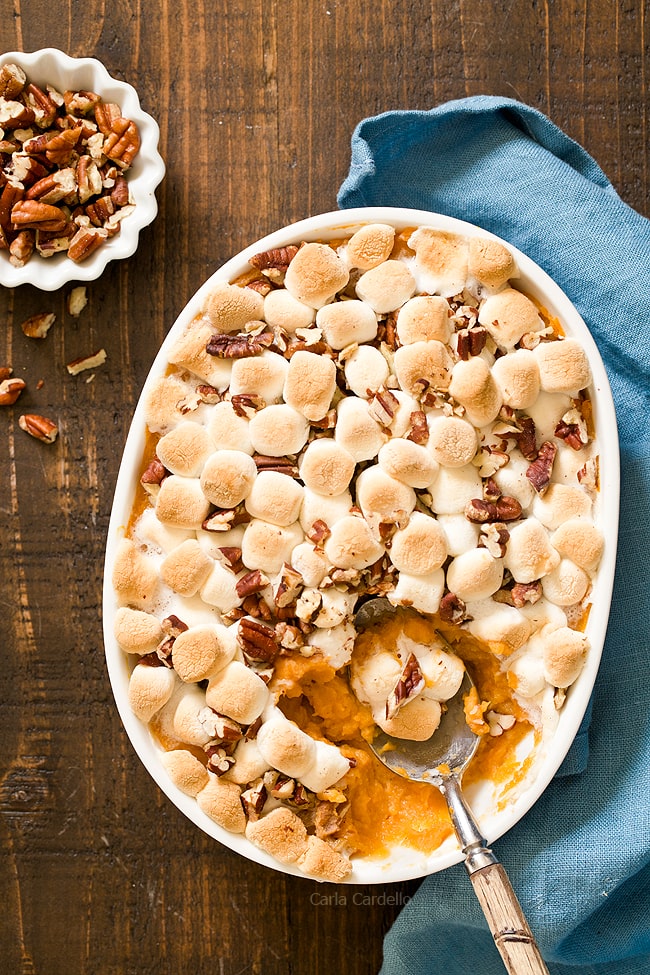 How do you boil sweet potatoes for the casserole?

The method for making sweet potato casserole is the same for making mashed potatoes. First, you bring a pot of water to a boil.

Then you cook the potatoes for about 10 minutes or until soft. It’s important to turn down the heat to a simmer because boiling moves the water too fast, causing the potatoes to disintegrate.

Drain and cool then mash until smooth. I prefer using a stand mixer, but you need to make sure you don’t overbeat them. Otherwise, they’ll have a gluey texture from overworking them. 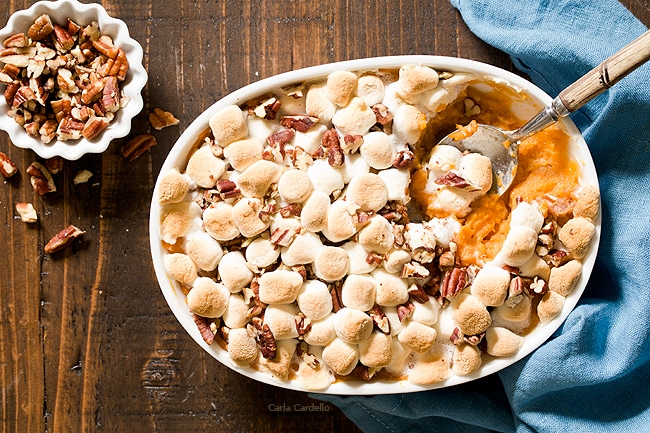 How do you make sweet potato casserole with marshmallows?

I’m not sure who decided toasting mini marshmallows on top of mashed sweet potatoes was a great idea, but I didn’t want to mess with tradition.

If it’s too sweet for you, you can top the casserole with all chopped pecans tossed in some butter and cinnamon.

Can you make sweet potato casserole ahead of time?

Yes, you can make sweet potato casserole ahead of time! Make the mashed sweet potato filling, refrigerate, then add the marshmallows right before baking.

You may need to add an extra 5-10 minutes in the oven since you’re baking cold sweet potatoes straight from the fridge.