An ode to my favorite city! Whether you live here, moved away, or simply love visiting, this recipe for Pittsburgh Pierogy Nachos with kielbasa, sauerkraut, and a homemade beer cheese sauce will bring a little bit of Pittsburgh to your kitchen. 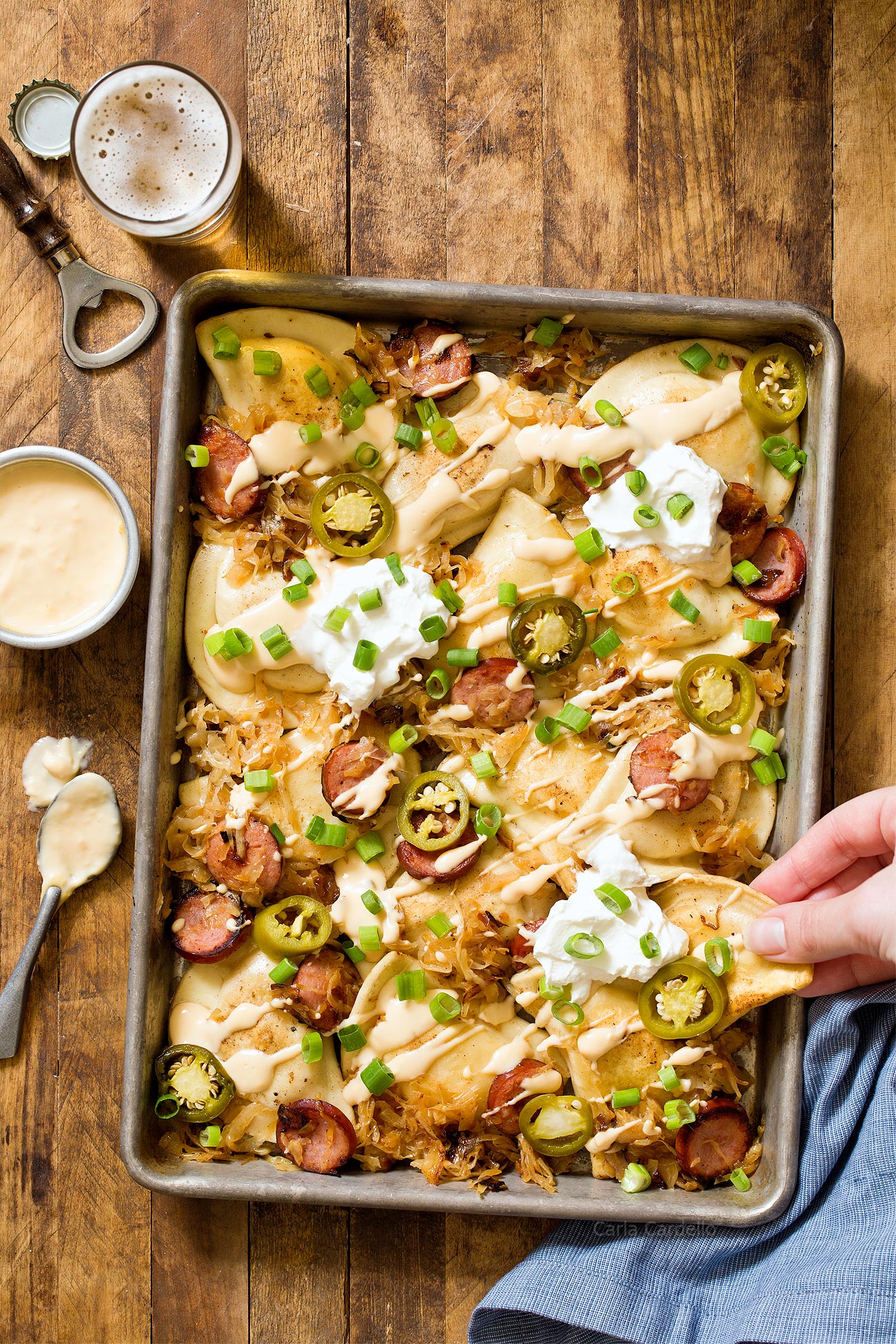 This post is in partnership with Mrs. T’s Pierogies.

How much does Pittsburgh love pierogies? Let me count the ways:

Because the Pittsburgh Penguins are in the hockey playoffs, the arena sets up an outdoor screen so fans who don’t have a ticket can still enjoy the game. When my friend and I attended one, we were talking about what we wanted for dinner when we got there. Then we started talking about how we were in the mood for pierogies and hoped the pierogy food truck was there.

Unfortunately it wasn’t, which made our pierogy craving even stronger. When that happens, I usually turn to cooking something similar at home.

Since the weather has been alternating between winter and spring, it’s usually been too cold to hang out at the outdoor screen. That’s when you opt to watch the Pen games from the warmth of your living room.

Pittsburgh Pierogy Nachos, to be exact. 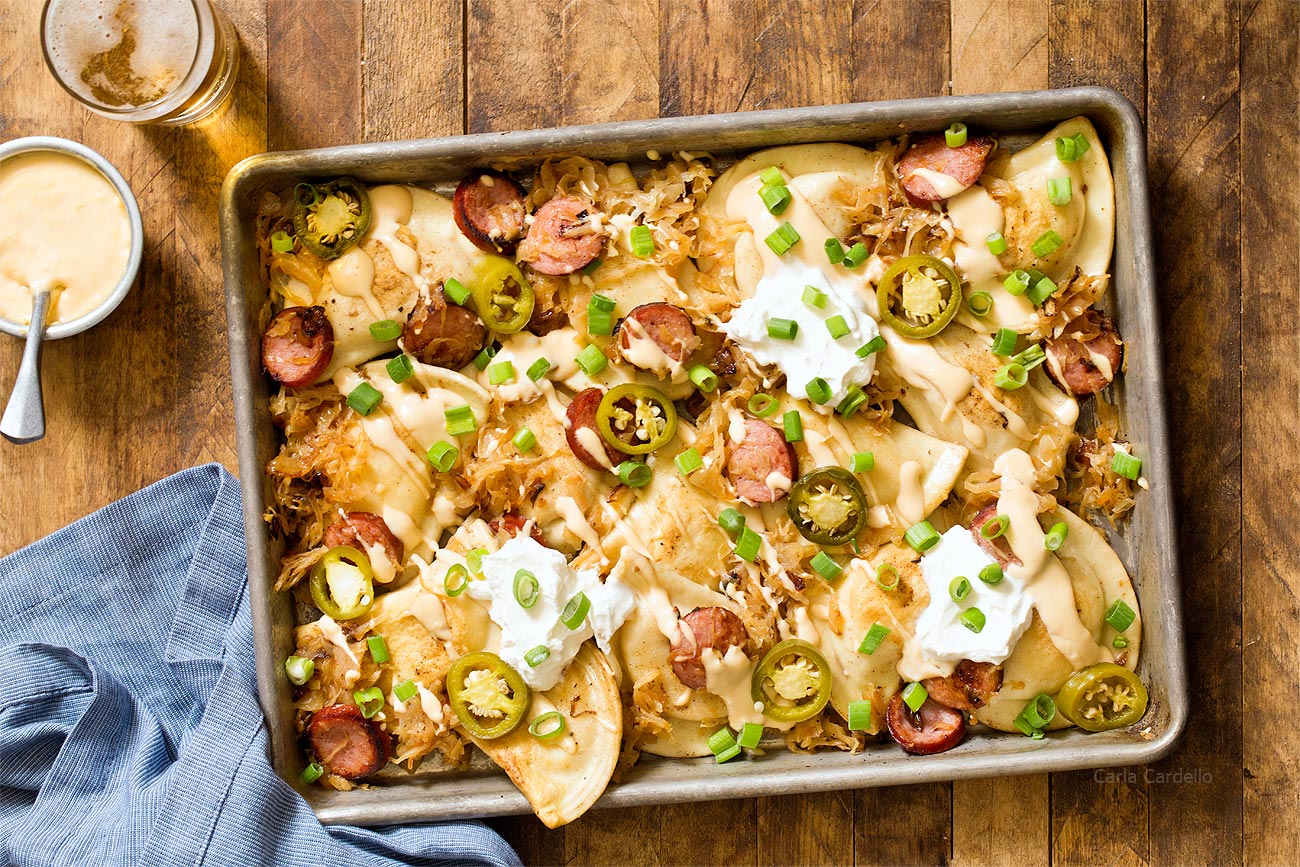 Growing up, my mom made pierogies probably every week. Caramelize some onions in butter and serve them on top for dinner.

But pierogies are so much more than that. Did you know you can also snack them? Fry them up and eat them like chips. Bet you can’t eat just one!

I put everything Pittsburgh into one bite – kielbasa, sauerkraut, a homemade beer cheese sauce, and of course fried pierogies.

This is my ode to my favorite city. 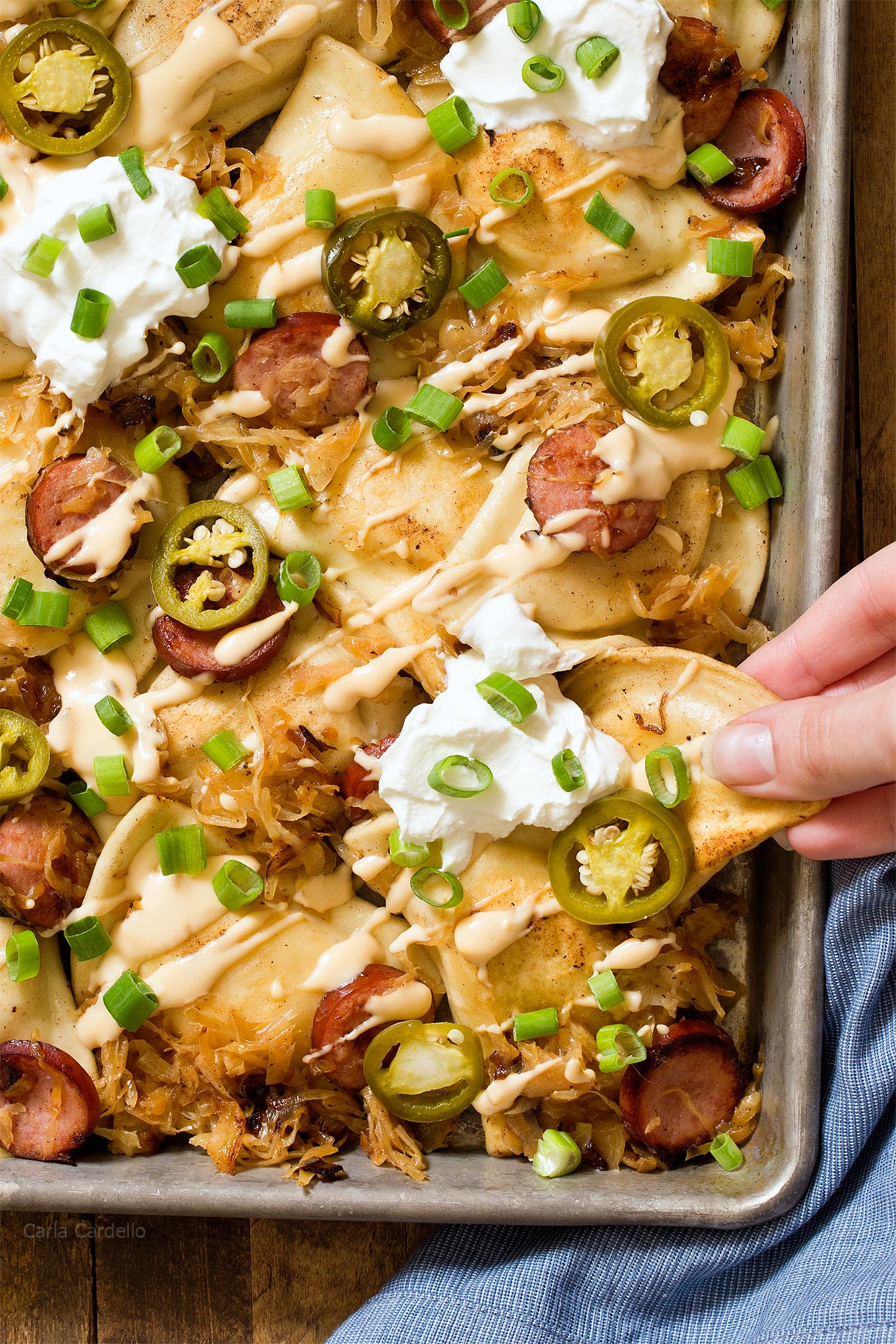 This isn’t the first time I’ve dedicated recipes to Pittsburgh. I’ve made The Pittsburger and Klondike Ice Cream Cupcakes in honor of the city I call home.

So what makes these Pittsburgh nachos and not just regular nachos? 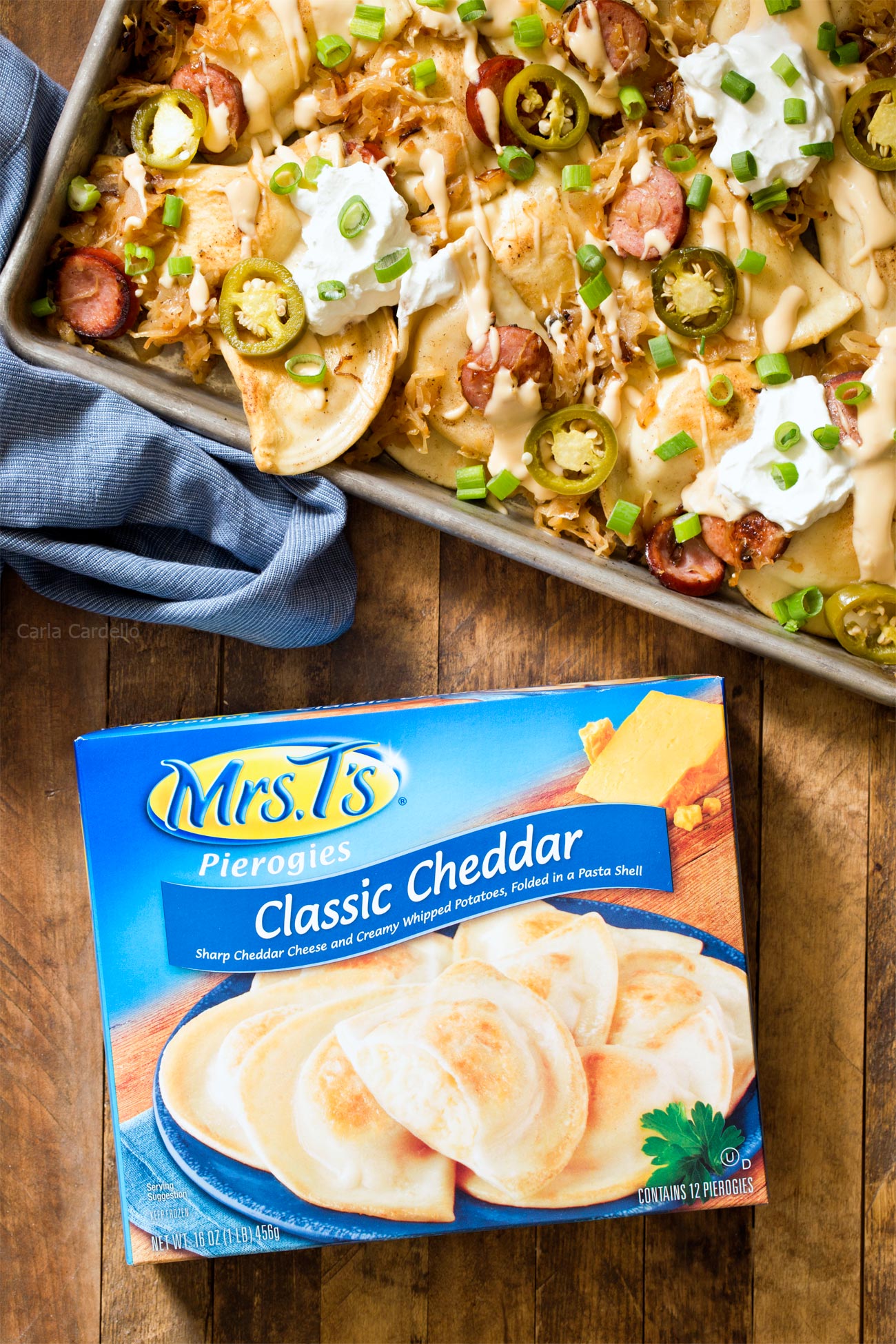 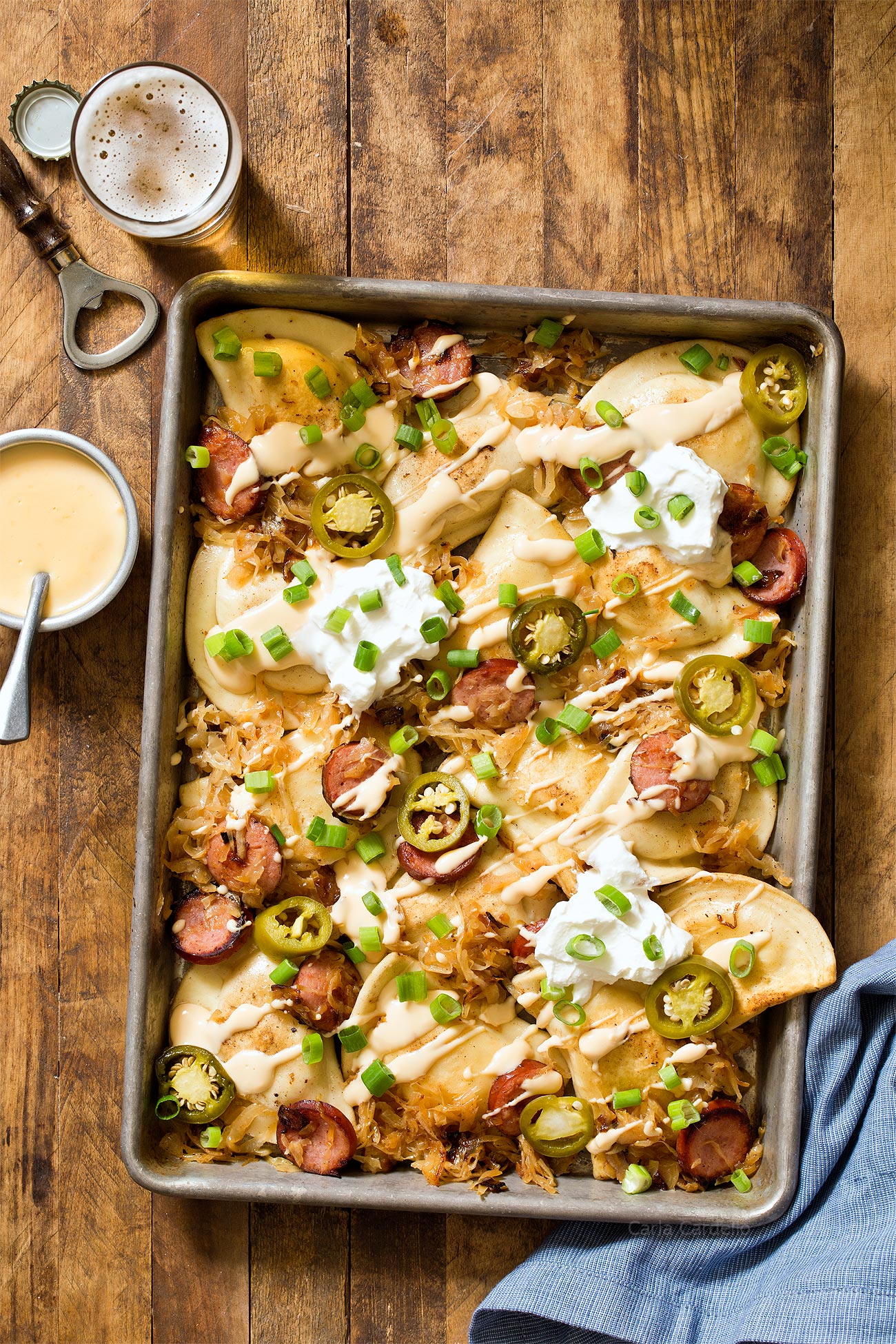 Serve your Pierogi Nachos with haluski.

Disclosure: This post is sponsored by Mrs. T’s Pierogies. As always, thank you for reading and supporting brands I work with, which helps keep this website running.