This traditional Mini Irish Soda Bread makes one small loaf with raisins, which is the perfect size to serve with your St. Patrick’s Day dinner for two. Recipe is eggless, no sugar added, and made without yeast. 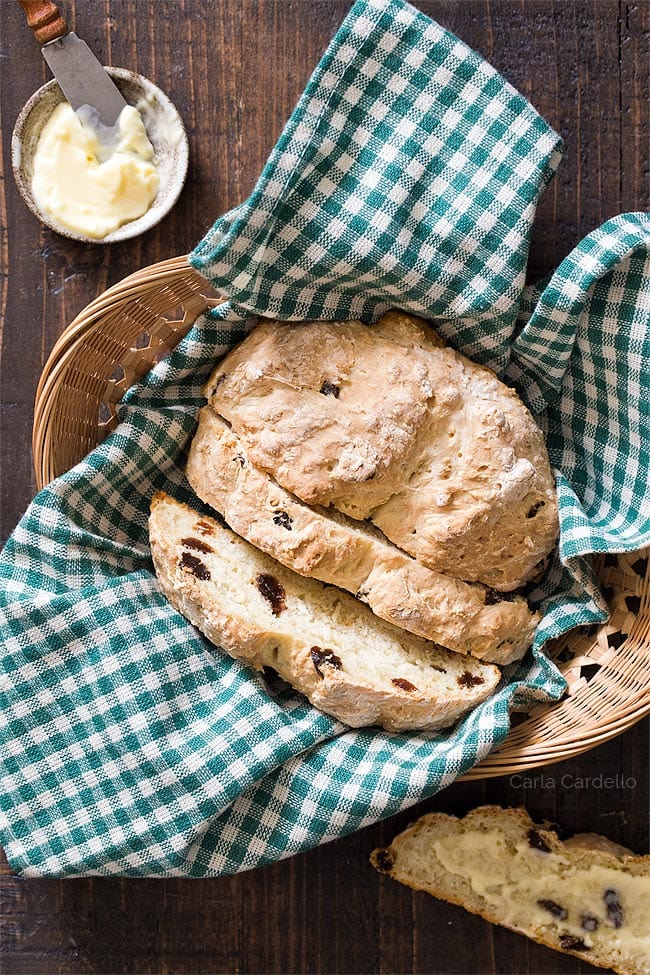 This Mini Irish Soda Bread reminds me of the time I spent a semester abroad overseas in Ireland.

I even spent St. Patrick’s Day in Dublin. Really it’s just the tourists who get amped up for the parade while all the locals get drunk at the bar.

In fact, the reason this blog was born was because I had trouble coping with my homesickness during my last month.

Of course this small Irish soda bread recipe brings back memories. Funny that I never ate much of it in Ireland. I think my friend’s mom made it for me once or twice and I may have bought it at the store once.

This Irish Soda Bread for two is unlike most bread recipe because it’s eggless, sugar free, and made without yeast.

In fact, it’s one of the easiest Irish soda bread recipes you can make because all you do is stir everything together in a bowl with a spoon.

If you’re looking for a little less traditional recipe, check out my Irish Soda Bread Muffins. 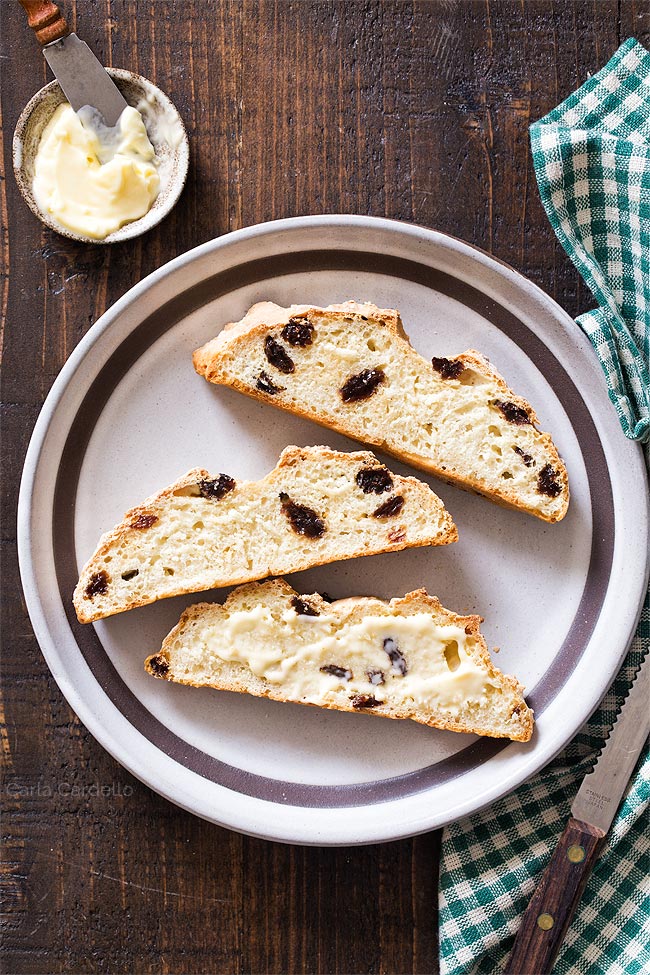 What is traditional Irish soda bread?

Irish Soda Bread is a quick bread recipe that uses baking soda for leavening rather than yeast.

Traditionally Irish Soda Bread is made up of 4 ingredients:

Technically raisins aren’t included, but I’ve always eaten Irish soda bread with raisins. They add a little burst of sweetness since there is no added sugar. 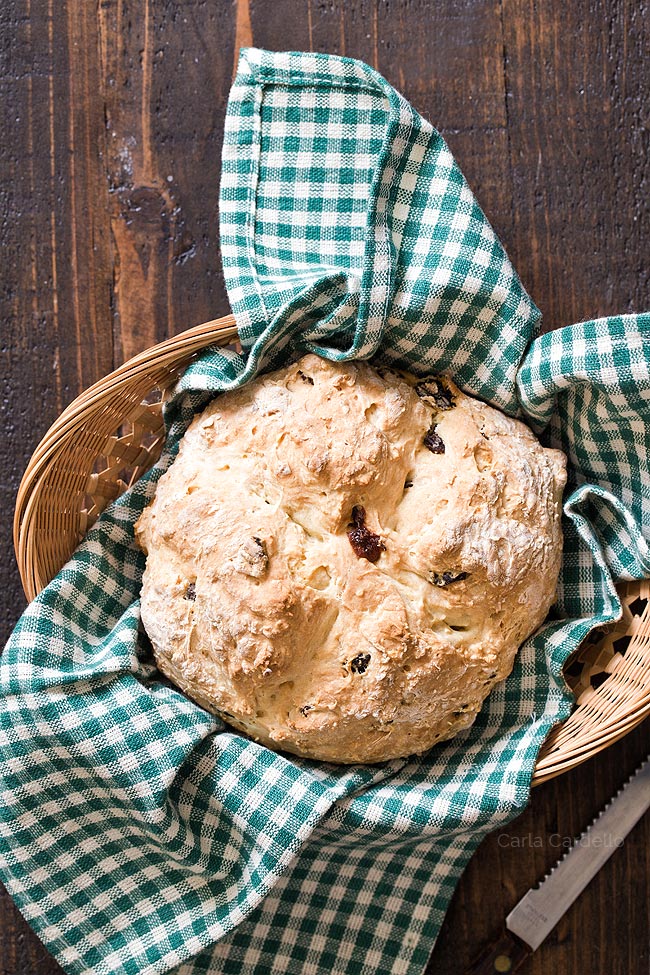 Can you make Irish soda bread without raisins?

Yes, you can make Irish soda bread without raisins by leaving them out. Or you can use another dried fruit such as cranberry or cherry. 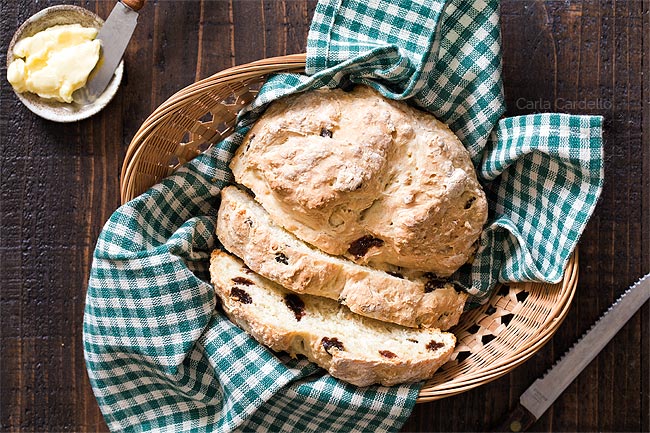 Can you substitute milk for the buttermilk?

Traditional Irish soda bread is made with buttermilk, not only to react with the baking soda but to also add flavor.

I personally would stick with buttermilk for taste purposes. You can usually buy a pint of it for small batch baking.

After making this recipe, check out my recipes for using up leftover buttermilk.

However, if you are out of buttermilk or stuck buying a giant carton, you can substitute an equal amount of whole milk plus 1 1/2 teaspoons lemon juice or vinegar.

This acid is needed to react with the baking soda, especially since there is no egg for leavening. Do not leave this out.

How did Irish Soda Bread get its name?

Irish Soda Bread got its name because it relies on baking soda rather than yeast for a leavening agent. The acid in the buttermilk reacts with the baking soda, which is how this bread rises.

This means it takes little time to prepare, very little kneading, and no resting or rising period.

Mix everything together with a spoon (no mixer needed!), knead it for about a minute into a smooth dough ball, cut an X in the top, and off into the oven it goes.

According to Irish folklore, cutting an X into the top is said to release evil spirits. 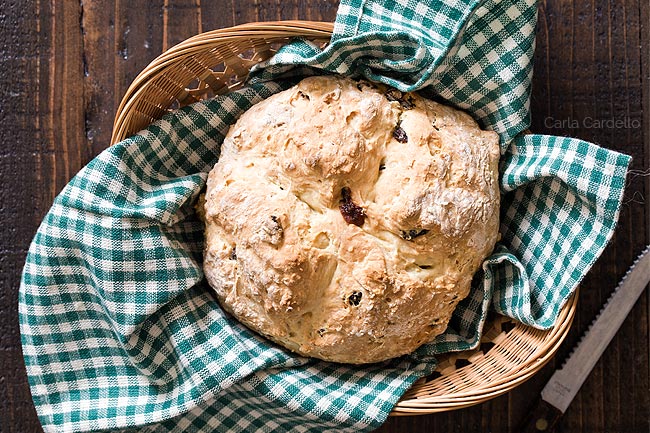 Irish soda bread is the easiest recipe to make because you don’t need a mixer.

First, add your flour, baking soda, and salt to a large bowl.

Next, stir in the buttermilk and raisins until a dough forms.

Gather your dough and knead lightly on a floured surface. You only want to knead for about a minute or two until the dough becomes smooth. No need to knead it longer because it doesn’t have yeast.

Form a 4 inch loaf, cut an X into the top, then transfer it to a greased baking sheet. Bake at 375F for 35-40 minutes or until golden brown.

Let it cool completely then slice with a serrated knife.

How To Store Irish Soda Bread

Irish soda bread is best eaten the day it’s made. Since this is a small loaf, that shouldn’t be too hard to accomplish.

You can store it in an airtight container or plastic storage bag for the next day, but the freshness won’t last long.

How To Eat Irish Soda Bread

The best way to serve Irish soda bread is with salted butter, maybe even some blood orange curd.