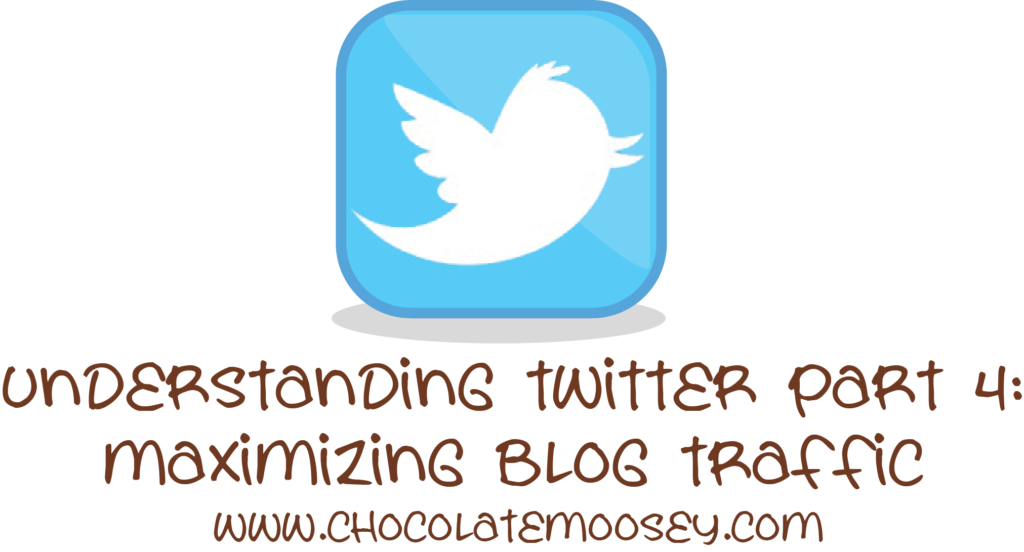 Welcome to Part 4 of Understanding Twitter – Maximizing Blog Traffic! For the past three Saturdays, Joan of Chocolate, Chocolate, and More asked me to talk about Twitter. So far, we covered what it is, why you should use it, and etiquette tips. Now I’m going to talk about using it to maximize traffic to your blog. There are so many factors affecting Twitter that this guide isn’t absolute. Some of you may be reading this and go “well that’s not the case for me.” I’m writing about what works for me because, well, that’s what I have the most experience in. I live in the US in the Eastern Standard Time Zone (EST). If you live in another time zone or another continent altogether, the concepts still apply. However, you’ll have to decide what works best for your audience.

There are two key points to maximizing traffic – reach new people and convince them to join your audience and convince current readers to stay in your audience. When you use Twitter, you need to balance networking and self promotion. People can tell when it’s all about you, which deters people from following you. If I don’t check Twitter all day, I easily have 1000+ new tweets to read. I don’t have time to follow those accounts that don’t take the time to interact with me. I’m not saying it’s wrong to follow them. Just that it doesn’t work for me.

Twitter is in my top 10 traffic sources. I’ll be honest – I get more hits from sites that focus on photos, such as Food Gawker and Facebook. Someone asked me about this – if photos attract people, should I bother promoting on Twitter? The answer is yes. Sure, Twitter is based more on text than photos. Twitter does allow you to share photos directly through their site, but you can’t rely on pictures since that is an extra link to click (I connect mine via instagram). This can be a huge advantage to those who are strong in writing and/or still developing their photo skills. Twitter isn’t meant to be a photo sharing site. It is meant to network with people who have similar interests as you.

The biggest key to maximizing traffic is thinking about what you are saying. You only have 140 characters, so it’s even more critical. You need to say it as direct as possible while still intriguing people. This is a challenge for me sometimes. What can I write that will make you click on my link? 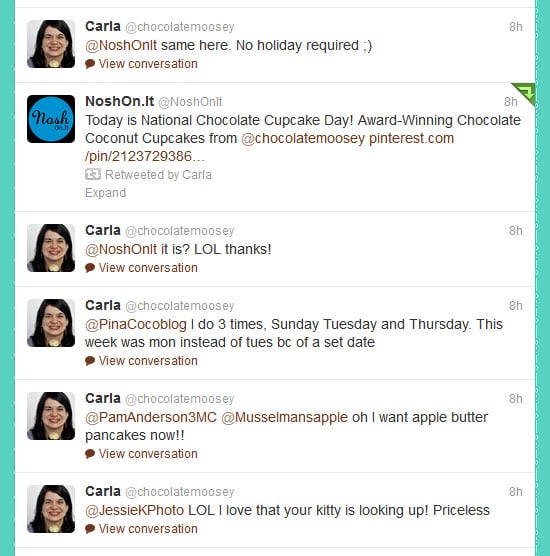 What do your tweets actually say? Go to your profile right now and read your timeline. If there are links involved, do you tell your readers exactly what the link is? If you have a new post, instead of saying “check out this new dish,” tell me what it is. I don’t have time to click on every single link that is tweeted unless I am intrigued (the words Nutella, marshmallows, cheesecake, smores, and bacon always catch my attention). Instead of saying “I have a new post,” say “New post – Chocolate Chili Spice Cookies.” If you’re really good, you can throw in a teaser, such as “New – Chocolate Chili Spice Cookies – you’ll never believe the secret ingredient that makes this sinful.” Hmm what *is* this secret ingredient? Now I want to go look. Don’t trick your readers though. If you keep telling us “you’ll never believe this” and there is nothing extraordinary, you’re right – we will never believe you.

Another thing you want to consider is your post title. If you belong to a group like Triberr where your posts are tweeted by others (the format is “Post Title http://link.com via @user”), they are going to post as whatever your post title is. When I was a new blogger, I would try to think of creative titles, such as “I’m Crumbling Up” (for a tropical crumble) Or “When You Just Don’t Want To Share” (for mini cakes). Now I title my posts after the recipe so you know exactly what you are getting. Which one are you more likely to click on: “Taking a Dip” or “Caramel Apple Butter Cheesecake Dip” ? Again, a lot of people don’t have time to click on every single link, so if I see the words cheesecake dip, I’m sold. I also try to throw in what makes the recipe unique. Instead of “Peanut Butter Cup Ice Cream,” I called it “No-Cook Egg-Free Peanut Butter Cup Ice Cream.” Wait, you don’t cook it AND there are no eggs? Click! I get such a huge reaction over the no-egg part. Again, you don’t want to mislead your readers. At the same time, you don’t want to overwhelm them either with a million descriptive words. Remember, Twitter is only 140 characters.

Speaking of 140 characters, leave room for retweeting so people can add a comment. If I want to retweet, I try to put a comment in front, like “I’ll take a dozen!” or “yes please!” It makes it a little more personal than just simply retweeting. If you max out your tweets, you are not giving your followers room to add a personal touch. It’s not the end of the world and most will modify your tweet, but once in awhile if I can’t figure out how to edit it, I’ll get frustrated and move on. This is one point I need to work on myself because I tend to max out my 140 characters.

Pay attention to what kind of tweets you type. If you are a member of Triberr, then that means your timeline is full of links. You’re sharing – that’s great and all, but if that’s all you do, your timeline is boring and border-line spam. I want to know YOU. I want to know you own a cat. I want to know you picked a pumpkin for the first time. I want to know that you have a guilty pleasure of eating an entire bowl of toasted marshmallows because your day was that bad. I want to connect to YOU. The more stuff you share, the more people can connect to. Twitter is about networking and having a conversation. Think about real life – if you find out someone else enjoys what you enjoy, you have an easier time talking to that person than someone who hates everything you believe in. I am more likely to retweet my Twitter friends than random Twitter strangers. You want people to retweet because those tweets reach people who don’t know you exist and possibly convince them to follow you. I’ve read some good articles and found new accounts to follow because someone I’m following retweeted that person. The key to maximizing traffic is to reach new people and convince them to join your audience.

You may think “the more I tweet about my posts, the more traffic I’ll get.” Although in theory it sounds true, in reality it isn’t. There’s some formula I read about that I can’t remember, something like for every promotional tweet you send, you need to have twice as many non-promotional tweets so you don’t look fake, self absorbed, or spam. Do I follow that formula? I do throw in personal tweets. Whether it’s enough to balance, I guess it depends on my mood for the day.

Finally, you need to find the right balance in how often you promote. If you are using Twitter to promote, pay attention to how often you tweet about your new post. There is a debate on how often you should, mainly because there are people all over the world in all kinds of time zones. On one hand, you don’t want to tweet every hour because people start to glaze over. On the other hand, you don’t want to not tweet multiple times because you may not reach most of the time zones. If you live in the Americas, your two main time zones are Eastern (EST) and Pacific (PST). Of course there are time zones in between, but those two are the ones I personally focus on, being three hours apart. If I tweet at 8 am EST, people in PST are probably still sleeping at 5 am PST. I tweet every 2-3 hours. Some may argue that’s too often. Others tweet morning, afternoon, evening, done. Honestly, there’s no one answer. What works for me may not work for you. The best way to decide is know your audience and cater to them. I use su.pr to schedule tweets, which is a part of Stumble Upon. It gives me stats I can use to track when my tweets are the most effective. Tweeting during the week versus tweeting on the weekend has its differences too. Most people work during the week and have the weekend off. Some people use the weekend to catch up on reading. Others may read during the week because they are too busy on the weekends. Again, know your audience and cater to them.

—
I hope you enjoyed my four-part guide to Twitter! How many of you either created a new account or are using Twitter more because of what you read? And a huge thank you to Joan for asking me for my expertise. I don’t think I thanked her enough during the series, so please go tell her hi. Need some convincing?

She is also celebrating 10,000 fans on Facebook! She loves to share dessert posts from around the foodie world, so if you like to stay up to date and discover new recipes, liking her is worth it.