My birthday gift arrived in the mail yesterday. I knew I was getting it because I ordered it on behalf of my parents last week. It’s what every baker should own – Baking: From My Home To Yours. I used to borrow it from the library, but it’s always out on loan. Now I never have to worry!

Since I want to get involved with more challenges, I decided to join Tuesdays With Dorie. Each week, a new recipe from her book is chosen, and we have to post on the upcoming Tuesday. The challenge for today is technically madelines, but since they involved a special pan, we were allowed to choose a past challenge recipe as an alternate. I decided to make homemade marshmallows.

Before I got started, I read the problems and questions other bakers had with this recipe. Not much except they are really sticky in the pan and the gelatin smells. I could smell the gelatin a little, but not enough to deter me. And I had no problem getting them out of the pan. In fact, I think I used too much cornstarch.

I did encounter one problem – time. I made the syrup first and then tried to accomplish the egg whites and gelatin while it was cooking, but I didn’t make it in time. I let the syrup sit for a few minutes as I worked on the egg whites, but by then it crystalized and could no longer be used, so I started the syrup again. I realized later Dorie uses a stand mixer, so while the egg whites are beating, you can work on other things. I only have a hand mixer, so if you are like me, do the egg whites first then the syrup.

I was really nervous because when I make fudge, it never comes out firm enough, and since the marshmallows involved sitting in a pan for a few hours, I figured they would still be a goopy mess. They were perfectly fine, which made me excited. I even tried toasting them, but they fell off the fork.

I would definitely make these again and in different flavors. 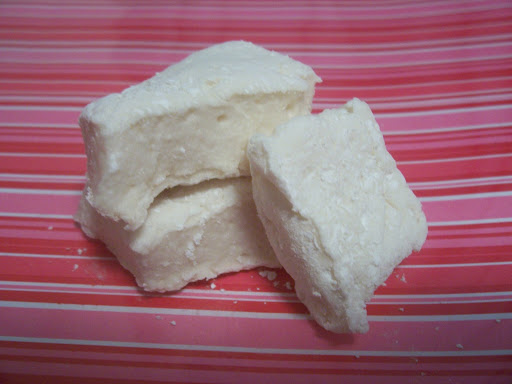 1. Line an 8×8 pan with plastic wrap sprayed with cooking spray and sprinkled with some of the corn starch.

2. Put 1/3 cup water, 1 1/4 cup sugar, and corn syrup in a medium pan over medium heat. Bring to a boil, stirring until the sugar dissolves. Once dissolved, continue to cook WITHOUT STIRRING until it reaches 265F degrees, about 10 minutes.

3. Meanwhile, in a microwave-safe bowl, sprinkle the gelatin over the remaining water (about 7 Tbsp) and let sit for 5 minutes or until spongy. Then heat in the microwave for 20-30 seconds to liquefy it.

4. Beat the egg whites in a large bowl on medium-high speed for 3 1/2 minutes. They should be firm and glossy. Don’t overbeat.

5. As soon as the syrup reaches 265F, pour into already-beaten egg whites. Add gelatin and beat for another 3 minutes. Add vanilla.

6. Using a rubber spatula, scrape meringue into the prepared pan, evenly spreading to fill corners. Dust the top with cornstarch and let sit for 3 – 12 hours.

7. Once set, cut with kitchen scissors (long knife would work too). You may need to rinse and dry frequently if they are too sticky. Put remaining cornstarch into a bowl. As you cut the marshmallows, coat them with the starch and shake off the excess.

8 comments on “Tuesdays With Dorie – Marshmallows”