*I am working on the challenge round-up. Hopefully it’ll be posted by the end of this week! It’s hell week at school. Only 12 more days!*

One year ago, I was in Limerick, Ireland. I decided to study abroad my sophomore year because I love to travel. It cost me the same in tuition; I just had to worry about room and board, traveling, and food. I met two online (non-blogger) best friends in person – Emer lived in Dublin while Ida flew in from Norway and stayed me for a week. Emer’s family pretty much adopted me while I was in school, even though Limerick and Dublin are a four-hour bus ride apart (two hours by car). I tried black pudding in Ireland and haggis in Scotland. I visited the most amazing place so far in my life (Giant’s Causeway is better in person, I swear!). I also got attacked by an emo cow.

One year ago, I was homesick. I didn’t bake because of limited resources (aka once I ran out of money, I was done), but occasionally Emer and I cooked. Then one day while I was writing an essay for class *cough*, I was surfing recipes. I really don’t remember how I came across food blogs, but I decided I wanted to start one. I used to have Chocolate Moosey as a personal blog when I was in high school. I still remember coming up with the name in the middle of chemistry class. After I graduated, I abandoned it. I was still in love with the title, so I kept it.

I decided to bake a cake this weekend for two reasons. One, I was going over my best friend’s house and two, it is Chocolate Moosey’s anniversary. I’ve been wanting to try this Peanut Butter and Jelly Cake for the longest time. It is in the cookbook Megan and I share, so maybe I can convince her to bake this as well. You won’t be disappointed!

First, don’t skimp on the jelly. I didn’t measure it, so I don’t know if I used the 1/2 cup it called for. Since the jelly is only present in between the layers, use a lot! It also helps the layers stick together when cutting. Second, the frosting makes wayyyy too much! I had enough for the two-layer cake and 24 cupcakes (from a box – I was too busy and didn’t want to waste frosting), and I still had frosting left! Also, I realized this is the seven minute frosting I have heard about. It tastes just like marshmallows except easier to spread.

Posted below is the adjusted amount of frosting. 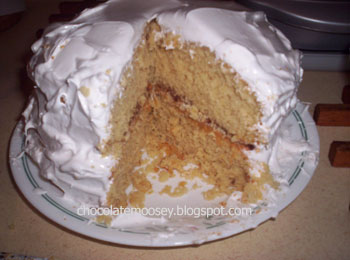 4. Gently remove cake layers from their pans. Place one layer on a plate. Spread top with 1/4 cup peanut butter and jelly. Place the second layer on top. Frost with marshmallow frosting.