Another Tuesday is here, and you know what that means! And I am bending the rules once again because I do not own a stand mixer. Why is a stand mixer so important? Normally, a hand mixer can get the job done just as well, but not for today’s original recipe. Madam Chow picked Pecan Honey Sticky Buns. I was excited because I haven’t made buns in a longgggggggggg time. So as I was scanning the recipe, I needed to make Dorie’s brioche. I looked up the brioche recipe, and when I read that it wears out your hand mixer and should be made with a stand mixer or by hand, my excitement dropped. My family recently bought a hand mixer because our other one broke after 30 years (it was my parents), so I wasn’t going to risk breaking a new one. I decided to see what recipes have been made before. Considering I had three lemons to use, I chose The Most Extraordinary French Lemon Cream Tart. Or rather, it was a pie because I don’t own a tart pan.

Now, the recipe flopped because of the baker, not because of the recipe. I read other people’s comments, and the hardest part was getting the cream up to 180F. I had that same problem. Next time I need to use a deeper pan for the double broiler because the boiling water almost spilled out after awhile. Also, it takes a lot of arm strength because you must constantly whisk for 10-20 minutes (depending on how long it takes to reach 180F). Although my cream did thicken in the fridge, it wasn’t enough to hold on its own in the pie crust. Also, there was too much butter for my family to stomach. Next time, I’ll cut the amount in half and taste as I go along. 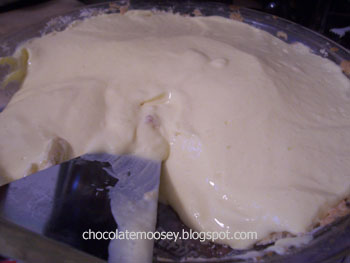 I’m not going to post the recipe because I wasn’t satisfied with my results (and I stress my results, not the recipe itself). The recipe can be found in Baking: From My Home To Yours, 2006 p.331.