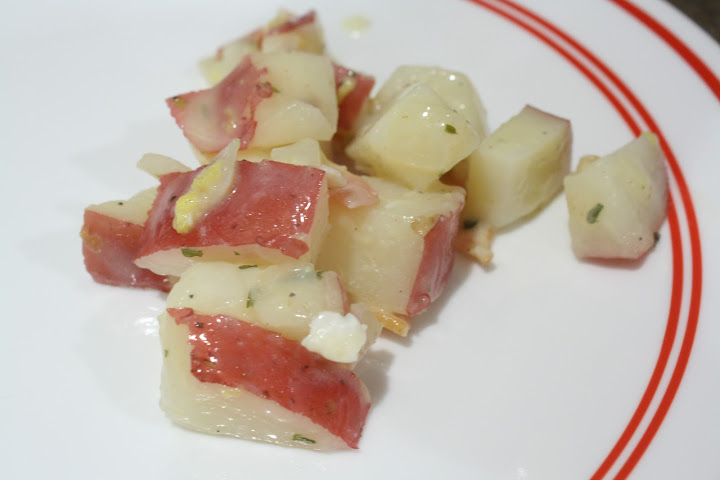 One benefit of living where I do is the Amish. They definitely know how to cook! I very rarely buy prepared foods, but their various creamy salads (potato, macaroni, chicken, even coleslaw) are worth it. Oh and you know those Auntie Ann pretzels you get at the mall? Yea, the Amish make butter pretzels too, except a million times better. Can you even imagine that?? I have about six pounds of potatoes just chilling on my counter, so I decided to make potato salad. But you see, I’m not a big fan of mayo based salads. In fact, this PA Dutch Potato Salad doesn’t even have mayo! Need some more convincing? There is bacon.

I remember the first time I had this particular salad from the store, being different from the usual mustard ones. When I took a bite, I noticed the addition of cider vinegar and bacon. It’s similar to German potato salad, both with the bacon dressing, but this has mustard in it. 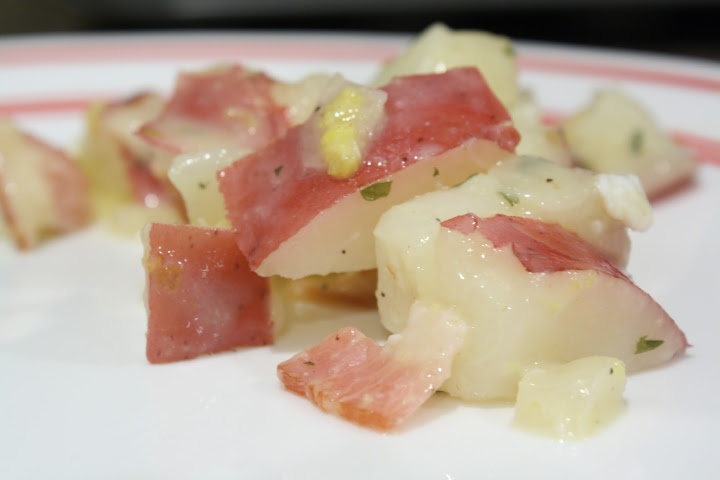 I wasn’t planning on posting this recipe, but after tweeting how good it was, I had several people ask for the recipe. This is a very sweet potato salad, so this isn’t for everyone. In fact, next time I may cut down the sugar even more. The bacon does blend in with the red skins, but I promise it’s there.

A few changes I made – I like my veggies al dente, so I cooked the potatoes for 10 minutes. You’ll probably want to go another 5 minutes. Second, I didn’t want to deal with raw onions, so I cooked them a little bit in the bacon fat before I added the sugar mixture. They were still crunchy enough to give some texture but definitely no raw onion breath here. Next time I may even add some garlic.

Source: Adapted from My Recipes