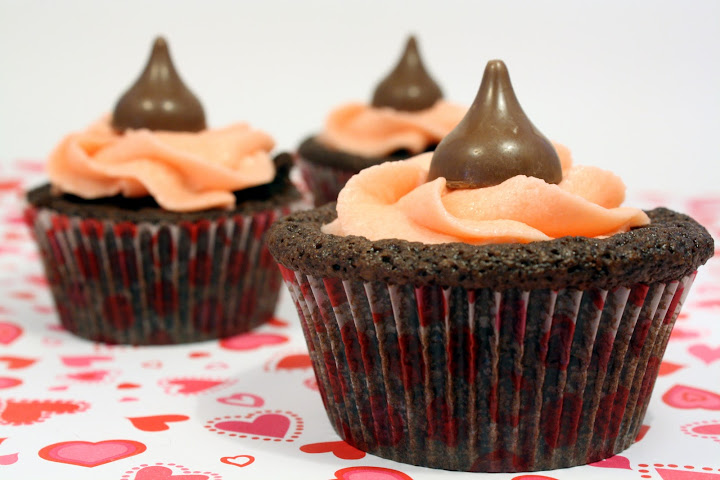 This year, I’m making a vow that I will not pity myself on Valentine’s Day, that I will love myself and not cry over the fact I’m alone in everything I do. Maybe I’ll even get some virtual kitty kisses (or I will play my video of Murray meowing 12783987347 times and stare at his Valentine’s Day picture from last year). This year I am going to indulge myself, starting with these Chocolate Cherry Brownie Cupcakes, filled with cherry mousse and topped with cherry buttercream and a Cherry Cordial Hershey Kiss. 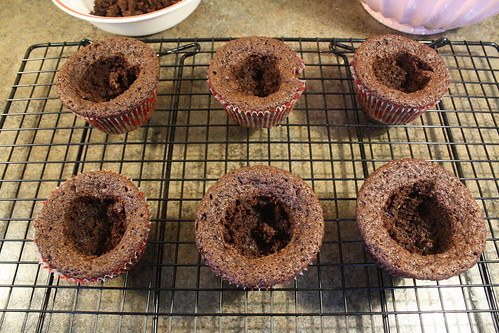 I was in a meeting at work when the idea of cherry mousse popped into my head. Really don’t know why – I was eating pizza and listening to a software demonstration. After dinner that night, I looked up recipes on how to make the mousse. Seems like if it’s not chocolate mousse, you use unflavored gelatin to stabilize it. I know if you make homemade whipped cream and store any leftover in the fridge, it will separate, and you have to whip it again. So it sounds like the chocolate acts as a thickener (like how chocolate hardens when cold), and when there is no chocolate involved, you use gelatin. You can buy unflavored gelatin in a small box (pack of four) in your store’s baking aisle. At Wal Mart, it’s one of the two top shelves, near the Jello (imagine that). And if you’re thinking what are you going to do with four packs, either make a lot of mousse or try homemade marshmallows. Or even homemade Jello (no thanks). If the texture of gelatin scares you, trust me it tastes just like whipped cream and not wiggly and jiggly like Jello. 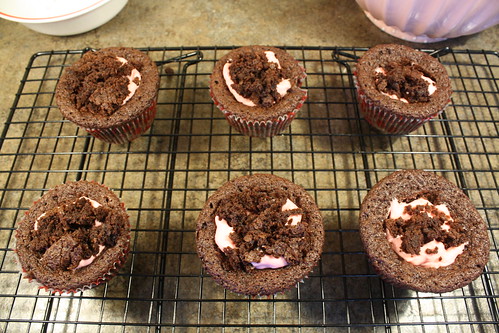 Originally, I made the cherry mousse to fill chocolate cups, but that idea failed (note – use paper cups and not silicone so you can rip away the paper, resulting in less broken cups). So what do you do with a big bowl of yummy mousse (besides parfaits with broken pieces of cups)? Fill cupcakes! I had my recipe for regular chocolate cupcakes but at the last minute switched to these brownie cupcakes. I was more in a brownie mood than a cake one. My cupcakes collapsed in the middle, but I was cutting the middle out anyway. Brownie apparently doesn’t cut as well as cake, so I ended up scooping out crumbs and eating saving them to put back on top. 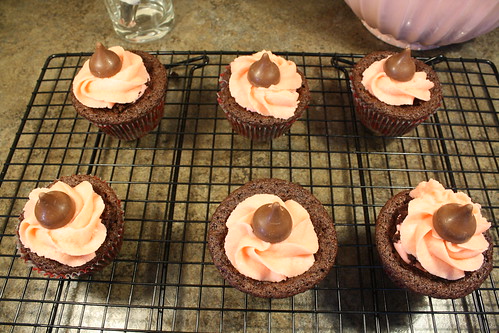 I was debating between cherry and chocolate frosting. Was it too much cherry with all that mousse and frosting? Would it be too much chocolate with a brownie cupcake and chocolate frosting? What about the Hershey kiss? It would show up better on pink frosting. So as you can see, I went with cherry. Good choice too. You get the chocolately brownie with all that cherry, but it’s not too much cherry at all. You could also change the flavors and use strawberry instead. Maybe some strawberry purree instead of cherry juice (although if you use frozen strawberries packed in juice, then you can use the juice). 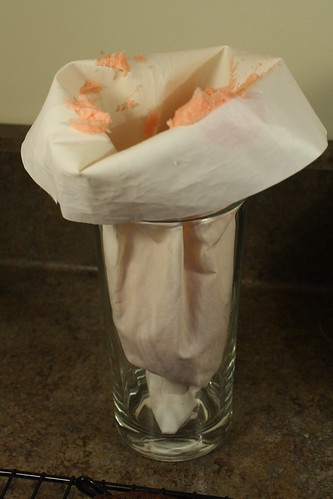 Little frosting trick I learned from Anne Thornton on the Food Network (did her show get canceled? :( ): Place your frosting bag in a tall glass and fold down the top. That way, you aren’t trying to fight with the bag in one hand while trying to fill it with the other. Plus it’s a nice holder if you need to set down your bag at any point. 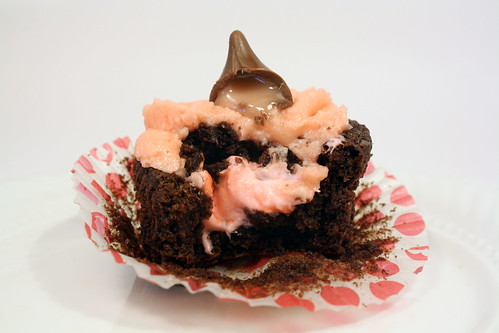 Question – does anybody know the trick to actually seeing the design on my liners after baking? I read somewhere to use two liners (plain inside, fancy outside), but the one time I did that, the outside liners were too loose and fell right off. 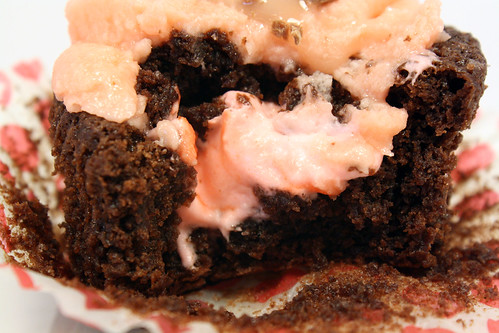