Hungarian Shortbread for Tuesdays With Dorie 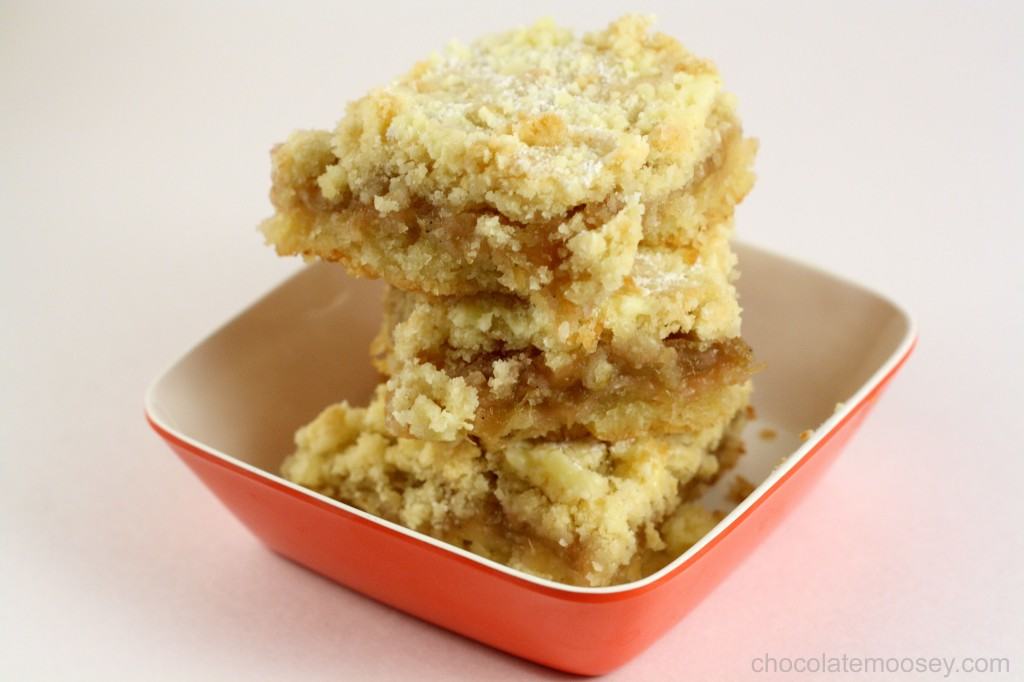 This week’s Tuesdays With Dorie recipe is Hungarian Shortbread – two delicate layers of buttery shortbread held together with rhubarb jam. Because of this group, I am constantly expanding my baking skills. Not only did I try rhubarb for the first time, I also tried a new technique. Grated cookie dough, anyone?

Before Sunday, I’ve never had rhubarb. I don’t like celery, so the fact that rhubarb looked like celery meant I was never going to willingly try it. However, I told myself that I’m going to follow the recipes as written unless something came up (like not finding or forgetting an ingredient). Plus I love Dorie and Julia, so they can’t steer me wrong (right?). Several bakers said fresh rhubarb wasn’t available yet, so they used raspberry jam. Fortunately for me, the farm had just put out the rhubarb the morning I went shopping.

The farm already trimmed the rhubarb, but in case you find ones with leaves – do not eat the leaves. They are rather poisonous, actually. The stalks are fine, just not the leaves. When I studied in Ireland, there was wild rhubarb growing next to campus. At the time I was clueless, so that is one thing I regret not taking advantage of. 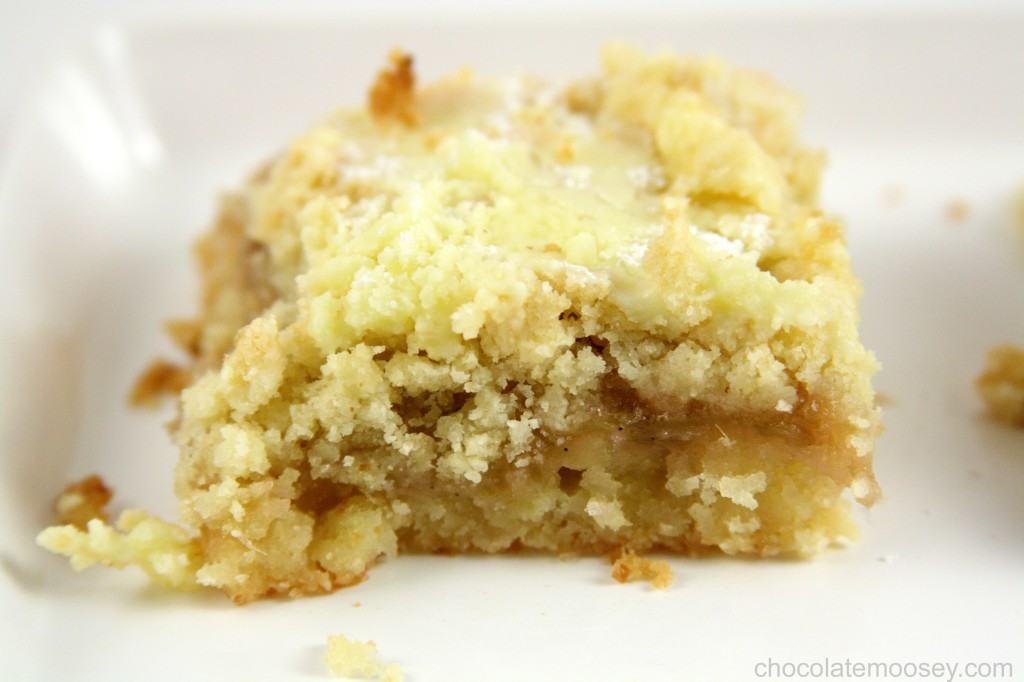 Oh. My. Rhubarb is Moosey approved. It is very tart, almost lip-puckering like a lemon. I love it. Why hasn’t anyone made me eat rhubarb before? Seriously, I think I have a new love. Plus I was really surprised at how easily the rhubarb “melted” into jam when cooked. 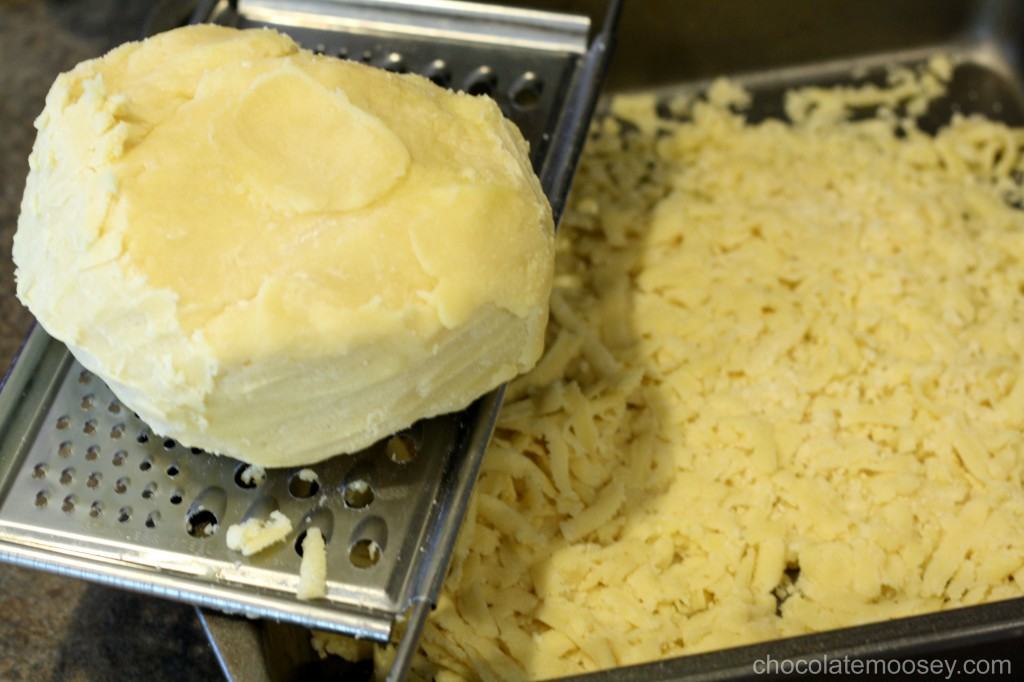 I also grated cookie dough. Did I just say that? Grating and cookie dough in the same sentence? I’m not sure how much of a difference grating made. My only guess is it makes all these delicate layers and you aren’t rolling and pressing the dough too much. I don’t make shortbread, so I can’t compare it to other recipes. 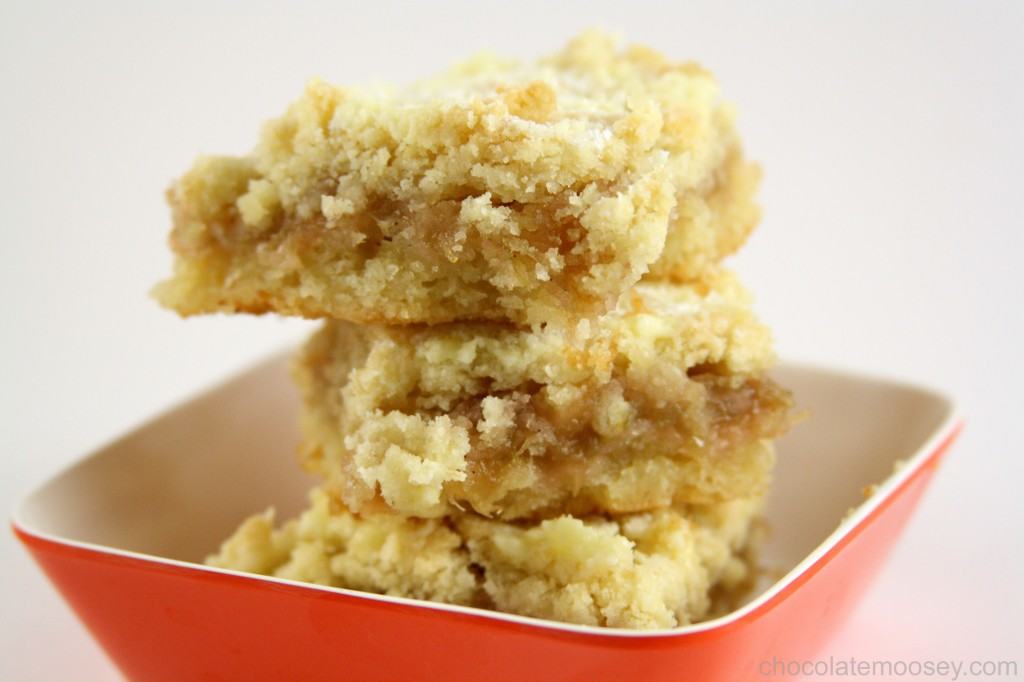 The shortbread was fabulous. Like most recipes, I cut this one in half and baked in a 9×9 pan. The full recipe called for 4(!) sticks of butter. When you eat one, you don’t realize it’s rhubarb. You’d think you were eating a lemon bar. Too bad the rhubarb lost its color. My bars are so monotone plus the powered sugar melted on top and didn’t stay very white.

A lot of bakers said their bottom layer was underbaked. Personally, I had no problem. Yes, mine were crumbly and falling apart a little, but I think that’s because there were still slightly warm when I cut them. Plus I had better luck when I cut the bar into bigger squares. More to grab, I suppose. 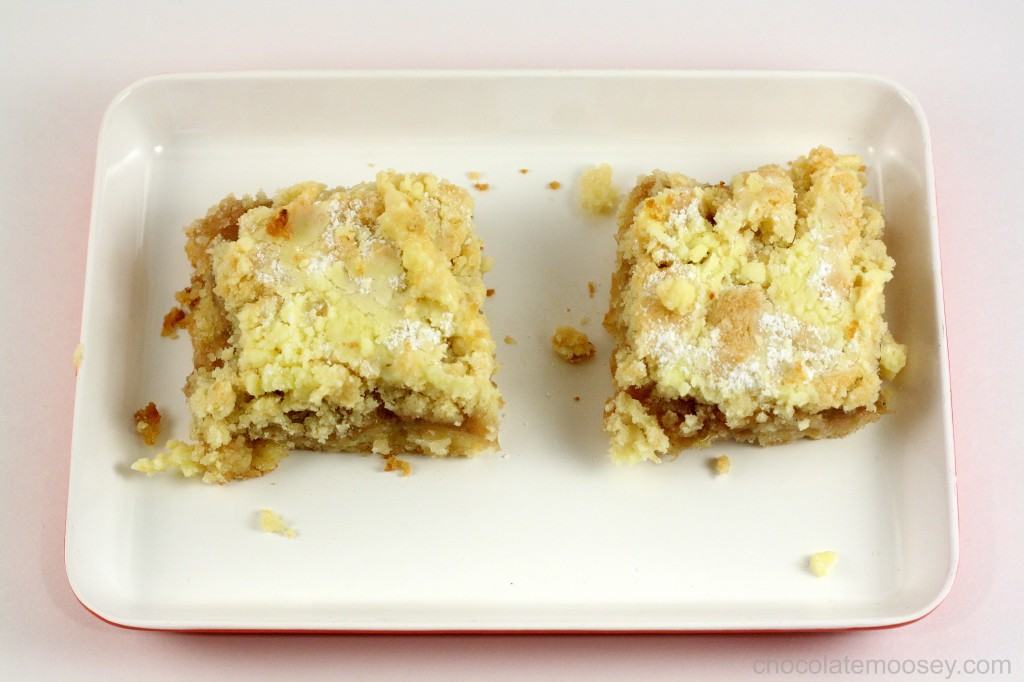 Thank you to our hosts Lynette of 1smallkitchen and Cher of The Not So Exciting Adventures of a Dabbler for this week! I won’t be making the Pecan Sticky Buns for next time because I don’t have a stand mixer. The buns require a brioche dough, which requires 15 minutes of beating. Poor hand mixer. I do have plans to buy a stand mixer very soon, but with my vacation and birthday coming up, I won’t go shopping until June (in case someone is reading this and wants to surprise me ;) ). And I will say this – brioche is the first thing I’m making in my new mixer.

13 comments on “Hungarian Shortbread for Tuesdays With Dorie”