I love my new ramekins. They are perfect for individual desserts, but there’s never enough to go around. When I saw this recipe in my free trial issue of Taste of Home magazine, I had to try it. I made these back in March, but because of laptop problems, I haven’t had access to the picture.

I apologize about the picture not looking very appetizing, but I wanted to get both the pudding and souffle layer. By cooking the ramekins in a hot water bath, the bottom remains liquidy. It’s hard to tell when they are done because you can’t see the bottom. I dug into one of them and saw that the bottom wasn’t thick enough.

This dessert is very light and lemony. 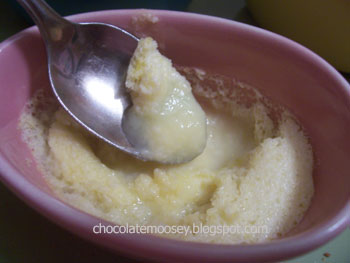 In a small mixing bowl, beat egg white until stiff peaks form, about 4 minutes. With a spatula, stir in a fourth of the egg whites into lemon mixture until no white streaks remain. Fold in remaining egg white until combined.

Divide between two 6-oz or four 4-oz ramekins. Place in an 8-inch baking dish. Add 1 inch of hot water to dish. Bake at 350F for 25-30 minutes (mine took 35 min) or until tops are golden brown. Serve immediately.