I had leftover whipping cream from making pie, so I had to find a recipe that didn’t leave me with extra egg whites. However, it did leave me with lots of chocolate mousse. One thing I don’t like about this recipe is after you beat the cream, you beat the egg whites. You have to make sure to wash the beaters and make sure they are 100% dry. Otherwise, the eggs won’t form soft peaks. I would say do the egg whites first, but then they would deflate by the time you finish the cream. Or at least that’s my theory.

I think I need this to get me through this week. The week before finals is always killer for me because my professors love making projects due this week instead of during finals week. Why? Don’t know. It’s been like that all four years. And I have to clean out my freezer before winter break. I have salmon, swordfish, beef, ground beef, and chicken plus frozen vegetables and Hot Pockets. Not to mention leftovers from Thanksgiving. Usually, I’m low on food. This week I have too much to eat! haha 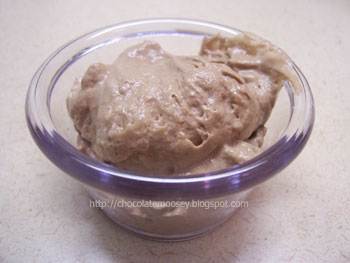 1. Melt chocolate and butter together until smooth. Add one egg yolk at a time, beating until well combined. Set aside.