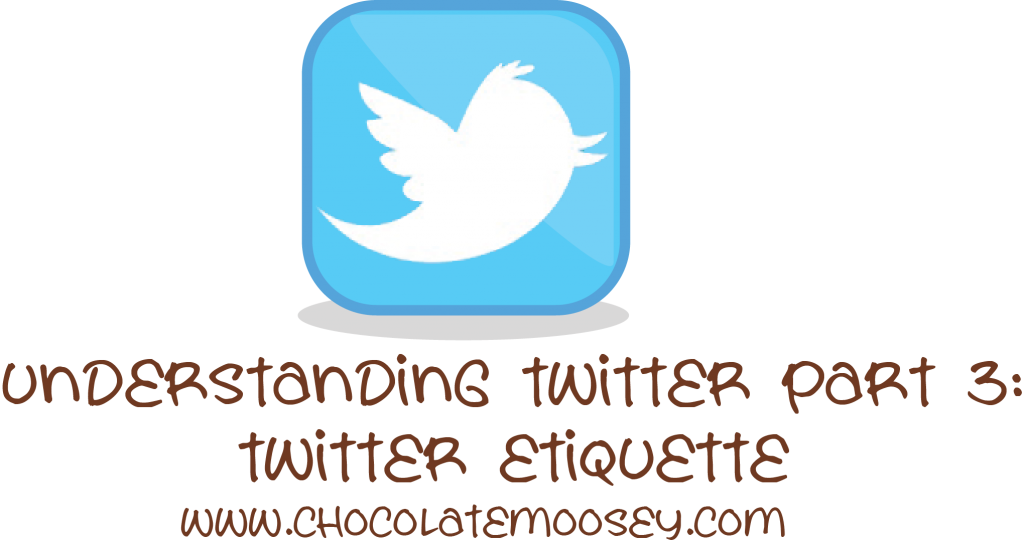 Welcome to Part 3 of Understanding Twitter! For the past two Saturdays, Joan of Chocolate, Chocolate, and More asked me to talk about what Twitter is and why you should use it. Now I’m going to talk about proper Twitter etiquette. Just like with any social media platform, there are dos and don’ts in using Twitter. Most of these tips are quirks that users, especially me, find annoying. You may agree with the list. You may not. This isn’t a “follow these rules or else” guide. It’s more of a “these things annoy users and may cause them to unfollow you” guide. Even then, following these “rules” can’t guarantee your followers will stay. It’s just meant to give you some perspective from a reader’s standpoint. The biggest thing to remember when using Twitter is to ask yourself “Do my followers really need to read this tweet?” Most of us follow hundreds, even thousands, of Twitter users, so the less clutter you offer someone, the more likely your following will stay (and grow).

2. Do not use send an automated message when someone follows you. Actually, this one doesn’t bother me as much, but so many people complain about it, it is worth mentioning. What I am referring to is you follow someone then instantly get an automated message, saying “Thanks for following me! Check out my site and Facebook page.” It’s a huge turn-off for people, and some even unfollow people because of it. I’ve never unfollowed anyone because of it, mainly because I’ll check out a person’s account and see what they are tweeting before I decide to follow, so I don’t just randomly follow back.

3. Twitter is all about interaction, so you do need to follow people. You don’t have to follow every single person who follows you, but it does not look good if 50,000 people are following you, but you are only following 3 people. When your numbers are disproportional like that, it is pretty obvious you are using Twitter for your benefit only and not willing to interact with others.

4. Do not snub your readers. I understand everyone gets busy. People may get all kinds of tweets throughout the day, but it means a lot when you reply to someone. Even if it’s a simple “thank you for sharing,” people appreciate you taking a minute and replying. There is one particular blogger that no matter how many times I tweeted her, answering her questions when she asked, she would not acknowledge me. I do know she was there because she would reply to other people. Maybe she had a good reason. Maybe she got so many responses, mine slipped through the cracks. Whatever her reason is, I ended up unfollowing her.

5. Think about your readers before you tweet. Twitter is about saying what’s on your mind, but sometimes tweets can become TMI. For example, I do not need to see the hole in your foot after surgery. That’s just gross (and unfortunately a true story).

6. Think about your readers before you retweet. Not everything needs to be retweeted. If someone gives you an awesome compliment or says something you totally agree with, retweet away. However, if I say “thank you for sharing,” does that really need to be retweeted?

7. The world does not need to see your direct replies. If you are replying to someone directly, such as a thank you or having a conversation about your cat, your followers do not need to see your replies. How do you know if your replies are seen by everyone? If your tweet starts out with a username “@juanitascocina thank you for sharing!”, your tweet will not show up in your followers’ timeline for the world to see. The tweet is still there, but there are only two ways to see it – if you went to my profile to see all of my tweets or if you are following both me and @juanitascocina.

If your tweet starts out with any character other than @, the tweet will show up in timelines everywhere. If I took that same tweet above and said “Thank you for sharing @juanitascocina!” now everyone who is following me will see that tweet. Does every single one of my followers need to see that I am thanking her for sharing? The answer is no. The one thing that really annoys me is when you purposely put a character in front of a name “[email protected] thank you for sharing!” See that period in front of the username? That means that tweet will show up in all of my followers’ timeline. Again, does every single one of my followers need to see that? No, they don’t. I find that method very sneaky. If you are trying to say something like “[email protected] has awesome recipes,” then I can maybe see why you would need the period, so all of your followers do see that tweet. In those cases, I just rewrite my tweet to say “For awesome recipes, check out @juanitascocina.”

8. Do not retweet every single tweet you are mentioned in, especially #FollowFriday (#FF). What is Follow Friday? Every Friday, people tweet and recommend users to follow. For example, I may say “For awesome recipes, follow @juanitascocina #FF” Most of the time, it just becomes a laundry list of users. This goes back to number 6 above about thinking before you retweet. Does every single one of your followers need to see every single tweet you were mentioned in? If an idol includes you or if someone writes a really awesome tweet, yes retweeting is understandable. But the laundry lists of #FF? Your followers are already following you, so they don’t need to see all of your Follow Friday mentions.

Again, these etiquette tips are meant to share perspective, not be rules you must follow. As long as you keep thinking “Will my followers want to read this?,” you’re on your way to being a Twitter success.

Stay tuned for Part 4 next Saturday!