This week’s TwD was chosen by non-member Lisa from Surviving Oz because she won the logo contest. I almost didn’t make these because I was tired yesterday, but I haven’t done a TwD in awhile. The nice thing about making brownies is you pretty much mix everything together in one pan then transfer and bake.

If you are friends with me on Face Book or read the P&Q section on the TwD site, you probably saw that I almost had a disaster. This is what I wrote:

Since there was only 1/4 cup flour, I put it in a cereal bowl rather than a mixing bowl. I guess I thought I added it with the sugar or something because I noticed after putting it in the oven that I forgot about it. Oops! Besides a few extra dishes, I recovered… 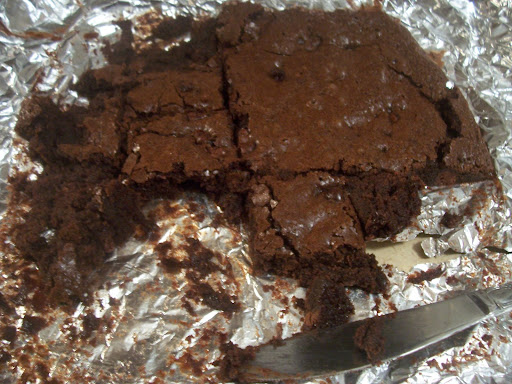 …or so I thought. Apparently when Dorie says use parchment paper, she really does mean parchment paper and not foil. Since I had to hurry up and put new foil in the pan, I guess I didn’t spray as much as I should. I thought I did, but my brownies argue otherwise. I refrigerated them for about 30 minutes which helped with the gooey factor, but they still stuck to the foil. 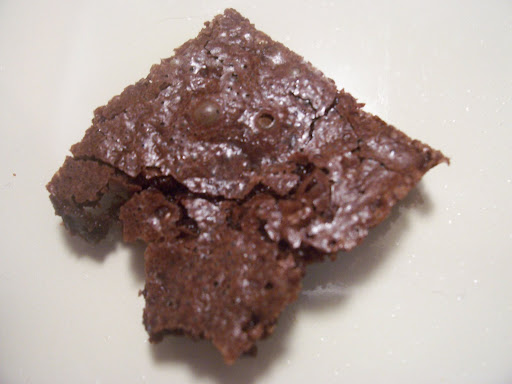 Tastewise – don’t let the instant coffee fool you. I will admit I am a coffee snob. If it’s not freshly-grinded coffee, I don’t want it. I can tell when you have Folger’s or Maxwell House because it just has that taste, but what’s worse than stale coffee is instant coffee. I don’t completely hate it – it reminds me of my stays at hostels in the UK. Not all hostels had a pot of coffee for breakfast, so my friend Shannon packed instant coffee, tea bags, and sugar while we were traveling. However, I would never willingly make myself a cup of instant coffee. In fact, I can’t really explain why I have instant coffee in the cupboard. I think it was a free sample pack or something. Anyway, fellow TwDers assured me the coffee is there to enhance the chocolate, and you can’t tell that much. Dorie called for 2 tsp but I used one serving packet, so maybe 1 tsp? I could still taste it, but it brought out the chocolate rather than oh I taste coffee and chocolate. I also added the optional cinnamon, but I can only taste a hint of it.

To sum things up, I would definitely make these again, as long as they don’t stick or I forget the flour again. Thanks to Lisa for picking this recipe! You can the recipe on pages 96-97 of Baking: From My Home To Yours.