Ever have a dream about food? Ironically, two days before making Dorie’s Brownies Buttons, which was this week’s pick, I had a dream about baking brownies. Or at least attempting. It was 2 AM and I was melting together chocolate and butter. Once I realized it was going to take 20 minutes to bake, I decided I wanted to go back to sleep and put the pot in the fridge, thinking oh it’s just butter and chocolate. It’ll be fine until tomorrow. Scary thing was this dream felt real. I was in my kitchen, at my stove, using my pot. I even made sure to check the kitchen for any evidence of brownie baking when I woke up haha

Here’s the crazy part. I had a bar of baking chocolate in the cupboard, which I was going to use for these buttons. When I went for it, I couldn’t find it. I brought everything out. WTF? Where’s my chocolate?! I started thinking but could not come up with anything made recently that used my chocolate. Possible conclusions are my brother ate it, having no job really does affect my memory, or I used it to bake brownies in my dream. Considering that last one is just silly and my brother never goes in that cupboard, I’m left with my memory failing. I even looked through my camera pictures, but nothing sticks out.

I couldn’t run to the store (or make anyone run to the store), so I melted semi-sweet chocolate chips. Don’t know if I had enough because I don’t have a kitchen scale. I kinda want to get one of those. Anyway, I filled 16 mini cups like Dorie said. Next time, I will probably make 12 because the buttons were so tiny and barely rose.

Did you know peanut butter chips do not melt very well? I was going to dip half in pb, half in semi-sweet chocolate. When I melted the pb chips, it just was not smooth. While they were hardening in the fridge, I got the brillant idea of sprinkles. Makes them much more fun. 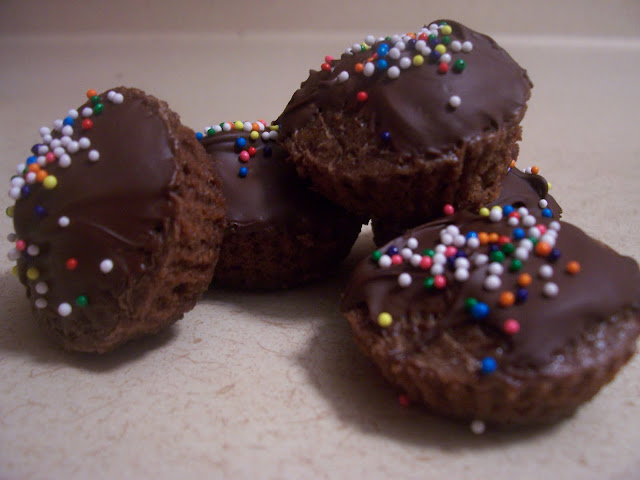 Thanks to Jayma of Two Scientists Experimenting in the Kitchen for this week’s pick. I hope she didn’t have some crazy dream about baking these. You can find the recipe on pages 106-107 in Baking: From My Home To Yours or on Jayma’s blog.