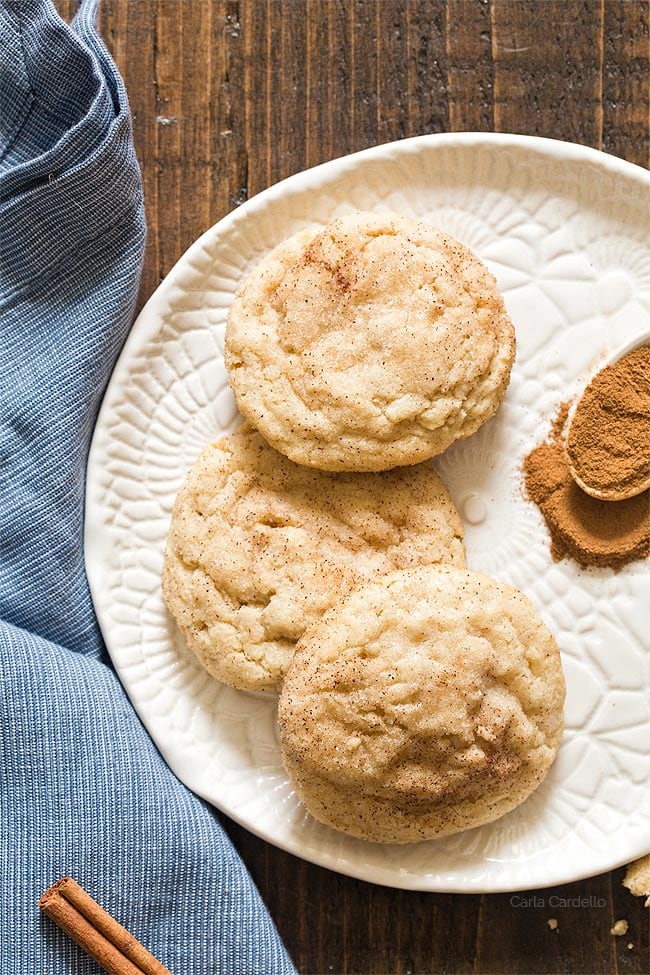 How are you hanging in there? Do you find yourself baking a lot?

I’m noticing an increase in recipe traffic, especially for my desserts. Looks like I’m not the only one who uses baking as therapy.

Based on your feedback, it sounds like a lot of you are using my small batch recipes so you can still bake without being bombarded with tons of sweets.

Especially if you’re like me where being stuck at home means you don’t have anyone else to eat your desserts.

That got me thinking – although I have tons of recipes, I don’t have a ton of small batch recipes for classic desserts, like my Small Batch Chocolate Chip Cookies and Small Batch Peanut Butter Cookies.

The question is where do I start first?!

Last week I did a survey via Instagram asking which small batch recipe you’d like to see next.

It was a close race but as you can probably guess by the title, Small Batch Snickerdoodles Without Cream Of Tartar won.

Man, I can’t tell you the last time I actually made snickerdoodle cookies before this post. Mostly because I don’t have cream of tartar in my pantry.

That’s why I came up with this snickerdoodle recipe without cream of tartar; it uses baking powder instead.

This means most if not all of you have the ingredients to make this cookie recipe right now without having to leave your home. 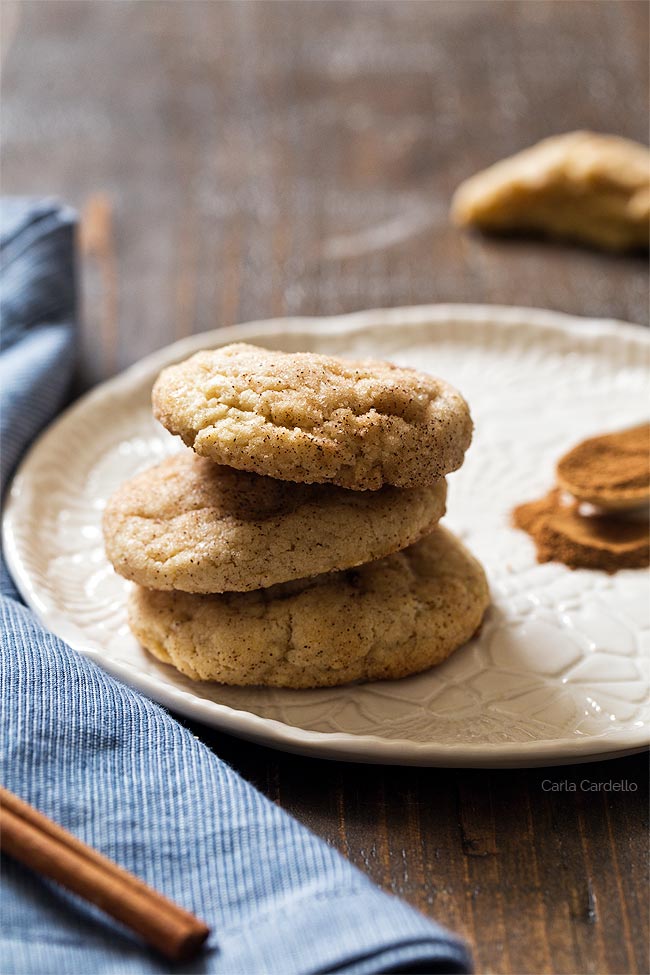 What is a snickerdoodle?

A snickerdoodle is a soft and chewy cookie rolled in cinnamon sugar for a slight crunch. They’re very similar to sugar cookies but also slightly different.

As I was testing my recipe, one of my batches ended up super thin. That’s because I didn’t have enough flour to balance the liquid and slow down the spreading.

What is the difference between a sugar cookie and a snickerdoodle?

What is cream of tartar?

How To Substitute For Cream Of Tartar In Snickerdoodles

Cream of tartar isn’t something most people have in their pantry. When I do have it on occasion, it often sits there forever because I only use it once or twice a year.

That’s why I wanted to make small batch snickerdoodles without cream of tartar.

Some cookie purists will argue my recipe isn’t a true snickerdoodle cookie recipe because I’m not using cream of tartar.

And honestly I’m ok with that. When was the last time you ate a snickerdoodle and went “yes I can taste that cream of tartar!”

Some people say you can taste the tang, but honestly all I remember is cinnamon sugar.

That’s why I used baking powder as a substitute for cream of tartar in cookies. Cream of tartar is still technically there but not as a standalone ingredient. 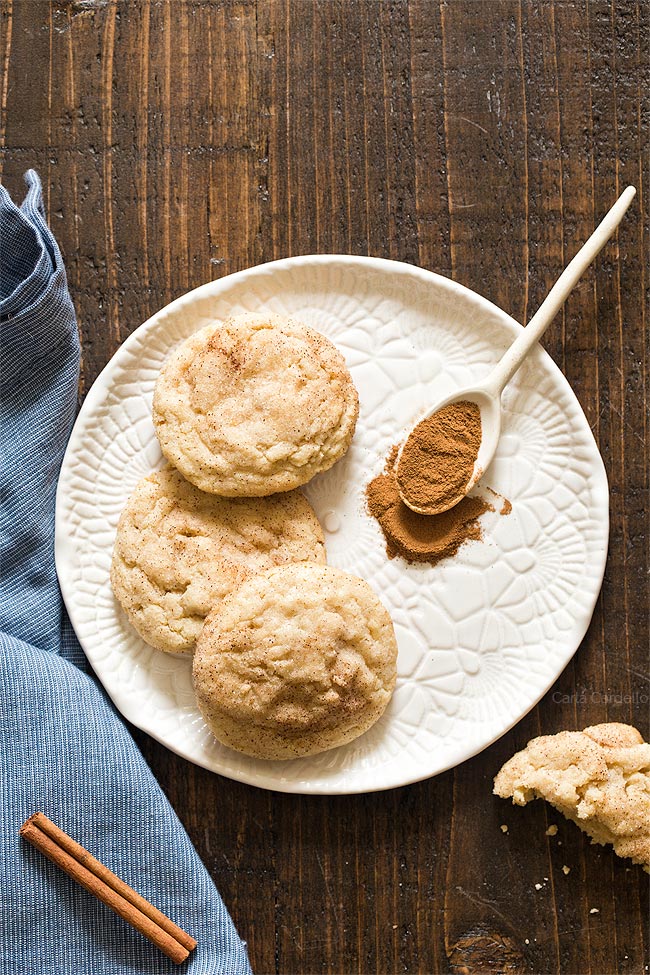 How To Make Homemade Snickerdoodles Without Cream Of Tartar

First, cream together your butter and sugar. Next, beat in your egg yolk and vanilla. Then, gradually add your dry ingredients.

Heads up – when you add the flour, the dough may seem too crumbly and ruined. This is where people start to panic. Keep going!

The key is to keep beating (on low speed!) for another 30-60 seconds or until all of the crumbs turn into the cookie dough you know and love. 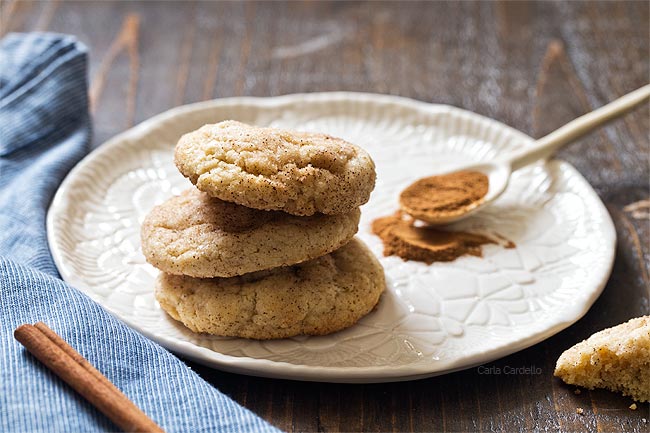 How many cookies does this small batch snickerdoodle recipe make?

Using a #40 cookie scoop (Amazon affiliate link) or by hand, scoop 1.5 tablespoon of dough and roll into cinnamon sugar. You should get around 7 cookies.

I was hoping for an even half dozen, but you can think of it as 6 cookies plus 1 extra for taste testing.

Bake at 350F for 8-10 minutes or until golden brown. Let sit on the cookie tray for a few minutes before transferring to a cooling rack.

Should snickerdoodle dough be chilled?

Snickerdoodle cookies are easy and quick to make because you don’t need to chill the dough. You can make and bake right away!

However, chilling certainly doesn’t hurt if you’re making them ahead of time. You may need an extra minute or so of bake time because you’d be baking them cold.

Can you freeze snickerdoodles? 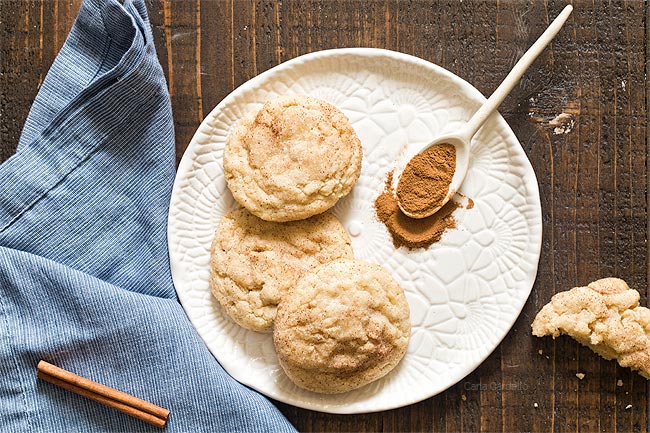 How To Store Small Batch Snickerdoodles

Assuming you don’t eat the whole small batch in one sitting, place snickerdoodle cookies in an airtight container and sit out at room temperature for up to 1 week.

What To Do With Leftover Egg Whites

Not sure what to make with it? Here are recipes using leftover egg whites.

There are two ways you can freeze snickerdoodles:

21 comments on “Small Batch Snickerdoodles (Without Cream Of Tartar)”