This past year while living at school, my one roommate would occasionally make stuffed chicken breast for her and her boyfriend. Hers was the Campbell’s version with the canned soup and boxed stuffing, so it didn’t appeal to me that much. However, while browsing through one of my Taste of Home magazines, I found a recipe for stuffed chicken cordon bleu. Chicken cordon bleu involves ham and swiss cheese. Until I started this blog last year, I was never a huge cheese fan. Now, I love cheese, especially feta.

This dinner is perfect for when you want to impress the people you are feeding. I bought already-thin chicken breasts because the first time I made this, I couldn’t flatten the chicken thin enough. I used canned green beans, but when those didn’t survive the pounding (and they deserved it – I hate canned vegetables), I resorted to the rolling pin. Don’t forget to remove the toothpicks before serving! 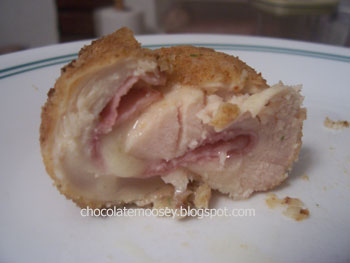 1. Preheat oven to 350F. If needed, flatten chicken to 1/4-inch thickness. Top each breast with one slice of ham and one slice of cheese. Roll up as tightly as possible. Secure each with a toothpick.

2. In one bowl, combine flour, salt, paprika, and pepper. In another bowl, whisk egg and milk. In a third bowl, place bread crumbs. Dip each chicken roll first into flour, then egg, then bread crumbs. In a small skillet, brown chicken in oil on all sides. They will not be fully cooked.

3. Transfer to 13×9 pan coated with cooking spray. Bake for 20-25 minutes or until chicken juices run clear. Before serving, remove toothpicks.