Did anybody else watch The Next Food Network Star premiere last night? I’m excited for a new season! I don’t have a favorite yet, but I think Brett looks a lot like Adam from last season. While watching the promos, I did favor Michael, but I’m not too sure after hearing him talk. It does give him lots of character, but I’m not sure if I could watch a whole show with him. Melissa looks like she is going to explode with energy.

Also, I saw promos for Dinner: Impossible with Robert hosting again. I must admit, I enjoy Robert as the host much better than Michael Symon, although I’m really surprised they are letting him come back after he supposedly lied about his credentials. 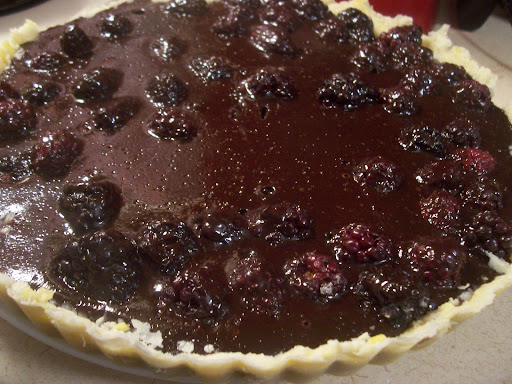 Enough about tv. Time for dessert! I recently received a tart pan for my birthday a few weeks ago. I was originally going to do Dorie’s Chocolate-Crunched Caramel Tart on page 355, but I also saw the Soft Chocolate and Raspberry Tart on adjacent page. Since I had a container of blackberries to eat, I decided to make the berry tart. Now, the recipe calls for a 9-inch tart pan. Mine is 11 inches. The crust recipe provided does make enough to cover my pan, but the berries definitely did not. I’ll have to make sure to buy two containers next time. I would’ve had enough if mold didn’t exist. Grr. 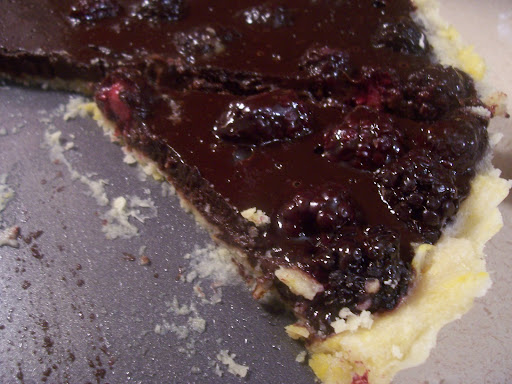 I don’t want to post the recipe because although this isn’t a Tuesdays With Dorie pick, I still want to support Dorie and her publishing company. Besides, you really should buy this book. For those of you who do own this book, you can find the tart recipe on page 354 of Baking: From My Home To Yours.