I know I’m a little late with this recipe, but why must gingerbread be only for the holidays? I bought a book a few months back titled Gingerbread – 99 Delicious Recipes From Sweet to Savory. Each recipe, even traditional ones like chocolate chip cookies, meatloaf, and corn dogs (little scary, I know), involves ginger, cloves, cinnamon, molasses, or all four. 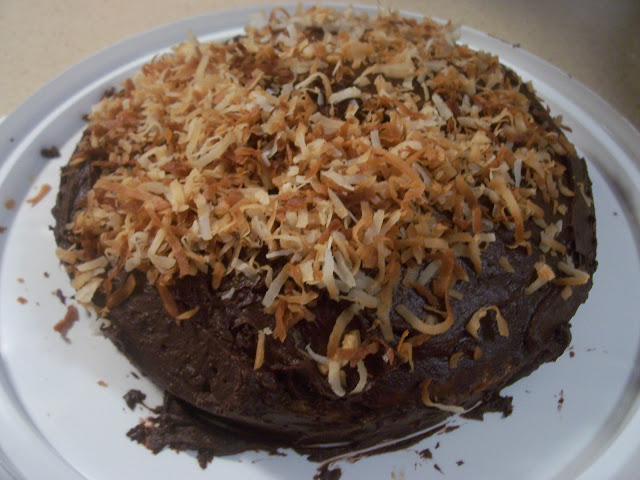 I had leftover chocolate frosting from my surprise cupcakes, so I decided to bake a cake. I was in the mood for gingerbread, so I turned to this cookbook and found Coconut Cake with Mocha Frosting. Instead of mocha, I used chocolate fudge frosting. 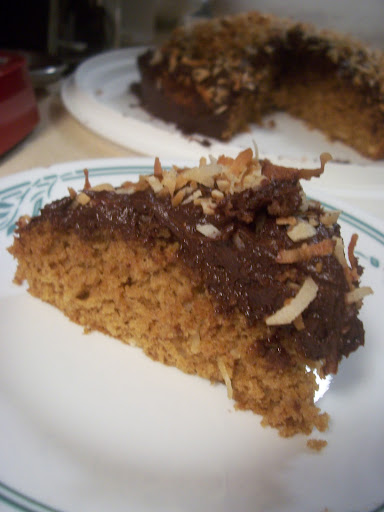 The original recipe calls for three layers of cake, but I knew we wouldn’t eat that much. I cut the recipe into thirds and made just one layer. I know some of the measurements are weird (1/3 tsp), so I used a teaspoon and guessed what a third would be. After frosting, it’s then topped with toasted coconut. 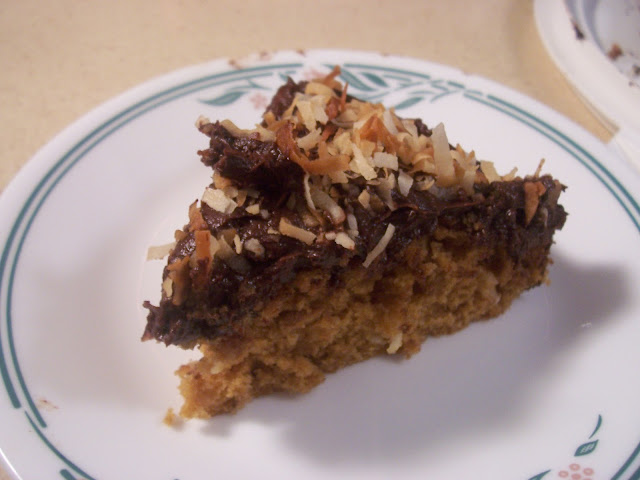 1. Preheat oven to 350. Grease one 9-inch round cake pan. Spread 1/4 cup coconut onto cookie sheet and toast in oven. Check every 5 minutes until lightly browned. Set aside to cool. Leave the oven on.

2. Mix together baking powder, salt, ginger, cinnamon, cloves, and cardamom and set aside.

3. Whisk butter and egg yolk until smooth. Whisk in sugar and molasses. Whisk in spice mixture. Gently stir in milk and flour, alternating between the two.

4. In a separate bowl, beat egg white until stiff peaks form. Gently fold into cake batter. Fold in untoasted coconut. Pour into pan. Bake for 20 minutes or until toothpick comes out clean. Remove cake from pan and let cool on cooling rack. Once completely cooled, frost and top with toasted coconut.