This week’s recipe is Dorie’s Lenox Biscotti. I have never made biscotti before, even though I am mainly Italian (gasp!). This recipe differs from other biscotti recipes because it calls for cornmeal. Whenever I went to the apple festival two weekends ago, I got really excited when I saw freshly-made cornmeal and flour for $1 each bag. I bought cornmeal and whole wheat flour, which is weird because I’m not a fan of wheat bread. They also had bran and flax seed, but I had no idea what I would do with them. I’m such a dork because only I would get excited over fresh flour. The farm has been doing this every year for how many years now, and this time I actually noticed. Probably because I haven’t been observant of ingredients before.

A tip I never knew. You want to freeze flour to kill off any bugs. Also, flour tends to go rancid quickly, so freezing slows that process down by a few months. You could use the refrigerator too. Most families don’t freeze flour because they go through all-purpose flour rather quickly. Just make sure you use air-tight bags or containers to keep moisture out.

Anyway, back to the biscotti. Dorie says to make the logs 12 x 1.5 inches, which make seem really skinny, but trust me. I didn’t understand the dimensions either until after they were done baking because they spread ridiculously. Then she said to stand them up like a marching band after cutting for the second baking. Several TwDers were confused, and some of theirs wouldn’t even stand up. Mine stood up just fine. If you are confused, Dorie means to stand them up so the cut sides are exposed. Mine came out fine, softer than the average biscotti, which my dad loved. He hates the really crunchy kind, but biscotti stands for twice baked and is meant to dip in a hot beverage. Some TwDers were saying they had to bake theirs longer, so maybe that’s why mine came out soft. Some of them did fall apart but for the most part they held together. Try to bake only one tray at a time because I baked two trays, and the bottom tray cookies got burnt while the top tray was fine.

I made the lemon almond version. Since I only had one lemon and Dorie calls for two, the lemon taste was more of a backdrop while the almond, particularly the almond extract, was in your face. I highly recommend using two lemons.

I can now scratch this off of my challenge list. 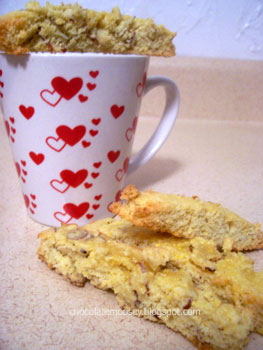 Thanks Gretchen from Canela & Comino for picking this week’s recipe! You can find the recipe on page 141-143 in Baking: From My Home To Yours or on Gretchen’s blog (link now broken).