Grilled Corn On The Cob Salsa

With the summer coming to an end, we foodies better take advantage of the crops, including corn on the cob. Before I went back to school, I made this salsa. Our grill broke at the house, so we’ve been using the George Foreman grill, but you can only do so much with it. So I decided instead of grilling the corn called for in this recipe, I was going to broil it. I forgot the brush the ears with melted butter before broiling, so that might’ve made a difference in taste (whoops!)

Sorry for the horrible picture. I didn’t have time to stage it better because it kept going and going.

Grilled Corn on the Cob Salsa 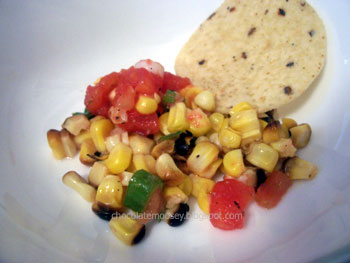 1. Brush the corn with melted better and grill or broil for 20-30 minutes, turning occasionally until tender and brown. Once cool enough to handle, remove kernels by standing each cob upright and slicing down the length of the cob with a knife.

2. Plunge the tomatoes into boiling water for 30 seconds. Then immediately plunge into ice water. Peel the tomatoes (skins should peel easily) and finely dice the flesh. Mix diced tomatoes, corn kernals, scallions, and garlic in a bowl.

3. Stir together lemon juice, oil, Tabasco sauce, salt, and pepper. Pour over tomatoes and corn and mix well. Cover and let sit for 1-2 hours before serving. Serve with either nachoes or on top of chicken.

4 comments on “Grilled Corn On The Cob Salsa”