I dedicate this to my best friend because she will be laughing too hard when she reads this post.

Last week, I tried making coconut and lime cookies from Sweet Mary (link now broken). They turned into a disaster. They spread way too much and stuck to my cookie sheets. 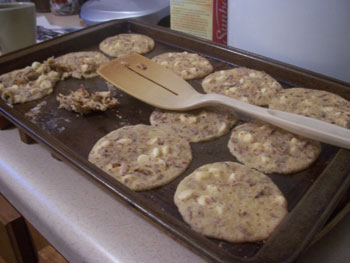 Since Mary created this recipe, I asked her if she had trouble with her dough and maybe I was supposed to chill it before baking. She gave me some wonderful tips on why they may have spread. My butter may have been too soft, and using margarine probably made it spread even more. Then she suggested messing around with the flour and sugar so the structure of the gluten holds more. Then we decided both of us would experiment more with the ingredients and flavor and post our results.

I decided to mess with the temperature of the butter and dough while she messed with the flour. Since I ran out of coconut, I didn’t use any. I froze my stick of margarine for 20 minutes before beating. I was going to do two variations – one with rum extract, one with vanilla extract. Since I didn’t have time to make two separate batches, I just separated the dough into two bowls. Now, since I had to add the extracts before adding the flour, I also split the flour mixture in half. However, I’m not good at guessing. With the flour, I cut the measurements in half (1/4 cup flour in this bowl, 1/4 cup flour in that bowl, etc). For the batter, I just poured and guessed. Bad idea. There was more batter in the vanilla bowl than the rum bowl. When I added the flour to the rum bowl, the dough came together nicely. When I added the flour to the vanilla bowl, it seemed too wet. I added another 1/4 cup flour, but I was afraid to add too much. It was a little bit better but it didn’t look nearly as good as the rum bowl. I chilled the dough in the fridge for 15 minutes before rolling it into balls. Then I put the cookie sheets into the freezer for 20 minutes while the oven preheated. I put them in the oven and baked for 10 minutes.

They weren’t done, so I baked another 2 minutes. The rum batch came out nicely and were baked on the bottom rack. 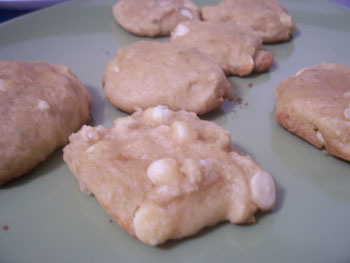 The vanilla batch spread more than the rum batch, making them soft and hard to scrape off of the sheets. So I put them back in again, and again, and again. They weren’t hardening up at all, so I pulled them out and let them cool before attempting to remove. 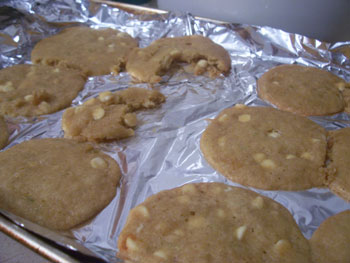 So I conclude that you can use margarine, although I’m wondering if butter would really make them not stick to the sheets. Keeping the dough cold does help minimize spreading. I wonder if they needed more flour?

Mary used more flour and a little more leavener and got a cake-like cookie. She prefers her first batch because they are flat and crisp yet chewy. We both agree that the lime overpowers the coconut (I used toasted coconut in my first batch). I also used white chocolate chips while she used dark chocolate chips.

Thanks Mary for doing this with me and for all of your help. We really do need to experiment more with this to get the ultimate coconut lime cookie.