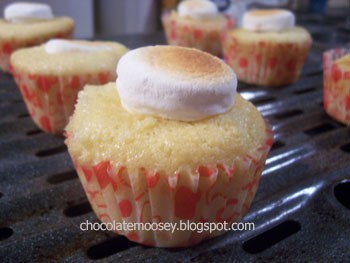 I’ve been meaning to enter the Cupcake Hero challenge, but the themes haven’t been compatible with me. Don’t know how I missed the coffee one, but the liquor one was a little illegal for me haha I was ready for this month’s theme – marshmallow. I know most people are probably going for rocky road or peanut butter marshmallow cupcakes, but I wanted something that (hopefully) nobody else will bake. Ok so it wasn’t really my idea, but I did find the perfect recipe. I had too many books and not enough time to find a cupcake recipe involving marshmallow, so I resorted to Recipe Zaar. I came across Baked Alaska-ettes. I love Baked Alaska, so this recipe was perfect! Normally I would’ve used a meringue on top, but since I needed a marshmallow cupcake, a big marshmallow worked too.

My biggest problem with this was the broiler. I have never used our broiler before. According to our manual, you aren’t supposed to preheat the broiler, which is weird, right? For this particular recipe, the cupcakes need to be under the broiler for 30 seconds, no more, no less. With the broiler not preheated, it took me 2 minutes for the marshmallows to toast. Normally, this would’ve been fine except the ice cream melted into the batter (which is why I didn’t take a picture of a cross-section). So, make sure your broiler is hot and ready to go.