…is bake cupcakes all day long! Except I get stuck eating most of them, and that’s probably not good for one’s diet haha I baked White Chocolate Peppermint Cupcakes for New Year’s Eve. I found a similar recipe at Baking Bites, but I dressed it up with peppermint extract and crushed candy canes. Since I only had enough white chocolate for the batter, I used a plain cream cheese frosting.

Nicole’s recipe called for 18 cupcakes, so I cut it in half and made 9. Next time, I will probably make the same amount but scoop out 6 cupcakes because as you can somewhat see, mine were too tiny to be full cupcakes. I also ended up baking them an extra 10 minutes.

I imagine you can do more with the white chocolate cupcakes as a base, such as adding raspberries or macadamia nuts. A raspberry buttercream perhaps? 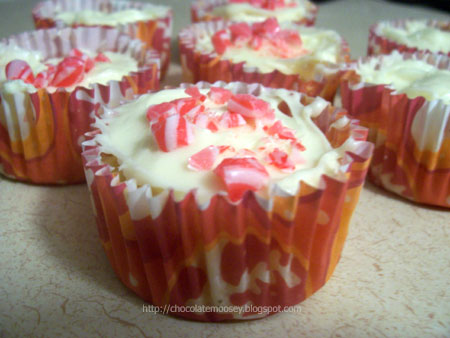 2. Mix together flour, baking powder and salt. Set aside.

3. Melt white chocolate by either heating it in 30 second intervals in the microwave or in a heat-proof bowl over boiling water. Stir well with a fork and cook only until the chocolate is smooth when stirred.

4. In another bowl, cream together butter and sugar until light. Beat in egg, followed by chocolate and peppermint extract. Working in three additions, alternate adding in milk and flour mixture, ending with flour. Mix until just incorporated and no streaks of flour remain. Divide batter evenly into prepared muffin cups.

5. Bake 20-23 minutes until a toothpick comes out clean and the tops spring back when lightly pressed with a fingertip. Cool on a wire rack.

6. Frosting: Cream together cream cheese and butter. Beat in vanilla and milk, then add in the confectioners’ sugar gradually until the frosting reaches desired consistency. Spread or pipe onto cooled cupcakes.