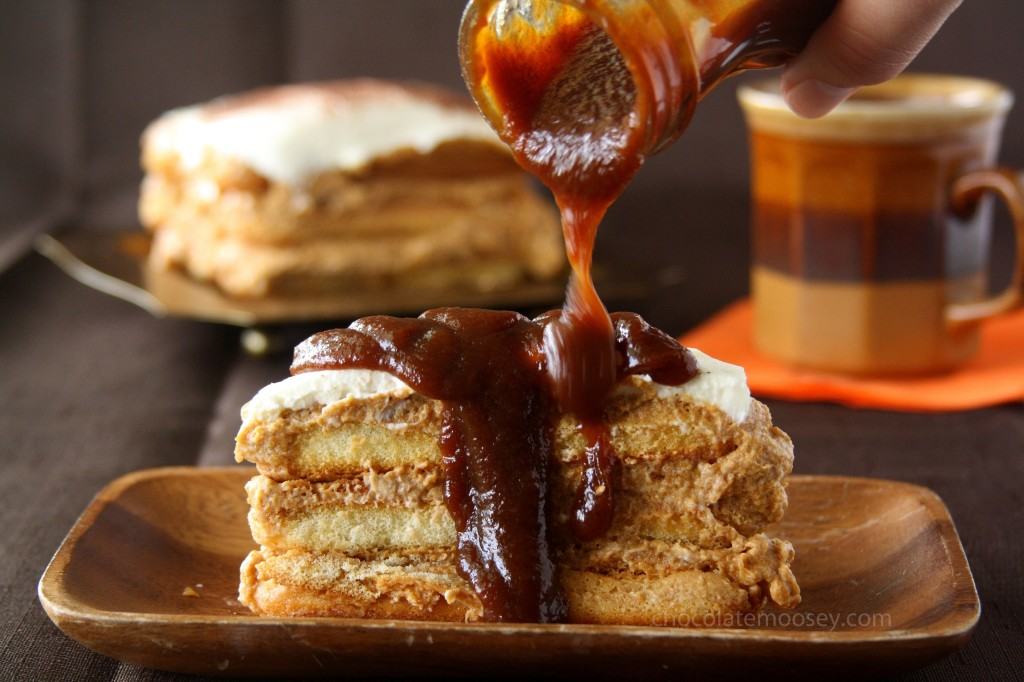 If there is one color that sums up fall, it has to be orange.

Well I wasn’t expecting the Pumpkin Tiramisu to turn out as brown as it did. I was thinking oh the pumpkin filling will be orange!

As soon as I added the cinnamon and clove, all hopes of orange were lost. I didn’t even have an orange tablecloth or fake pumpkin, just a lonely little orange napkin.

I even covered it with (brown) Pumpkin Butter Caramel Sauce. Well….at least the lighting makes it look elegant? 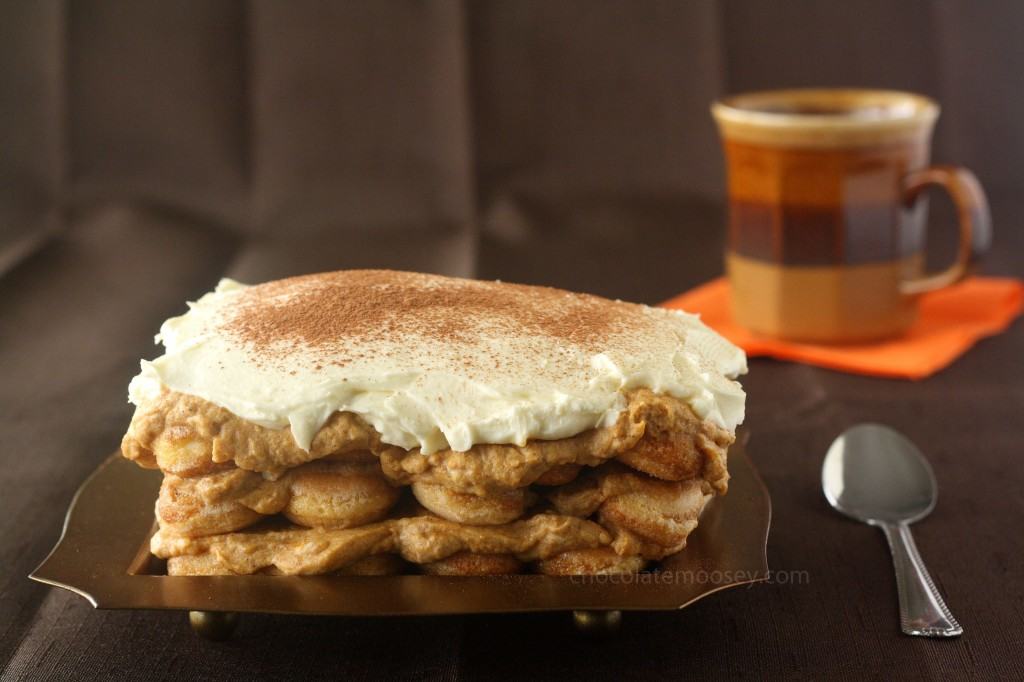 If you were here back in June for #strawberryweek, you may remember the disaster of Strawberry Tiramisu.

After Dad saved the day with ladyfingers, I had half a package leftover. I knew I wanted to tackle tiramisu again when I was better.

Once I found mascarpone at the store, I grabbed it. Then it sat in my fridge for about two months. Whoops. 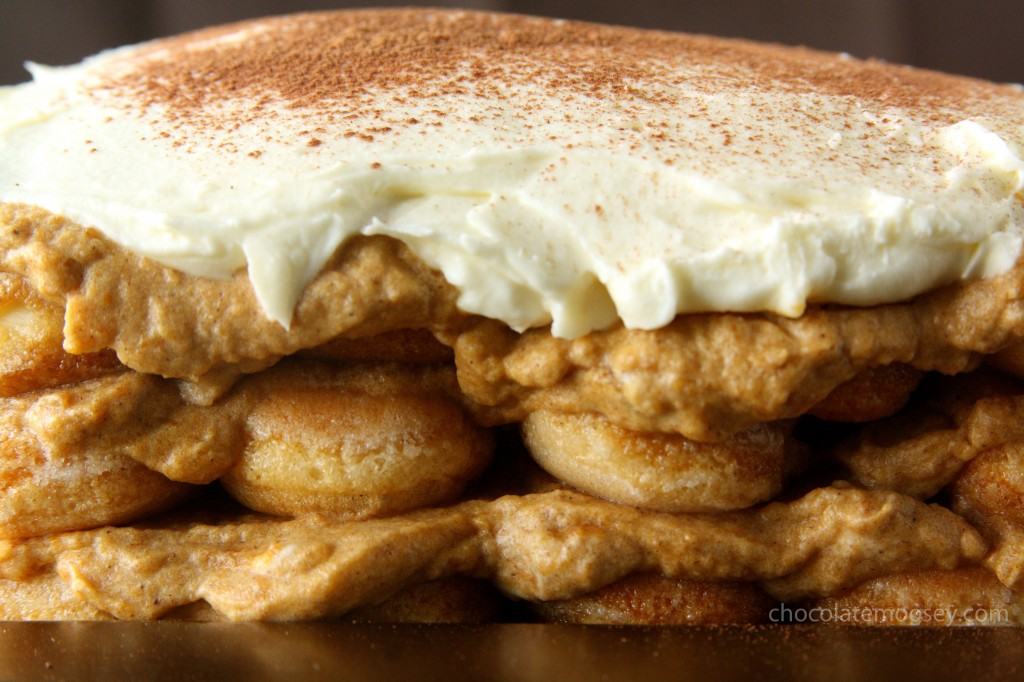 When Pam, our lovely host this week, announced the theme, my mind immediately went to the Pumpkin Tiramisu recipe I had bookmarked for awhile. Not only would it fit the theme, I could finally use up those ladyfingers and mascarpone I had sitting in my kitchen all this time.

I’ve never had mascarpone before, and I like it.

I really don’t know how to explain it. It has the creaminess of cream cheese but is more….cheese tasting.

It’s definitely not sweet at all, which is why you often see it in desserts because it cuts the sweetness. 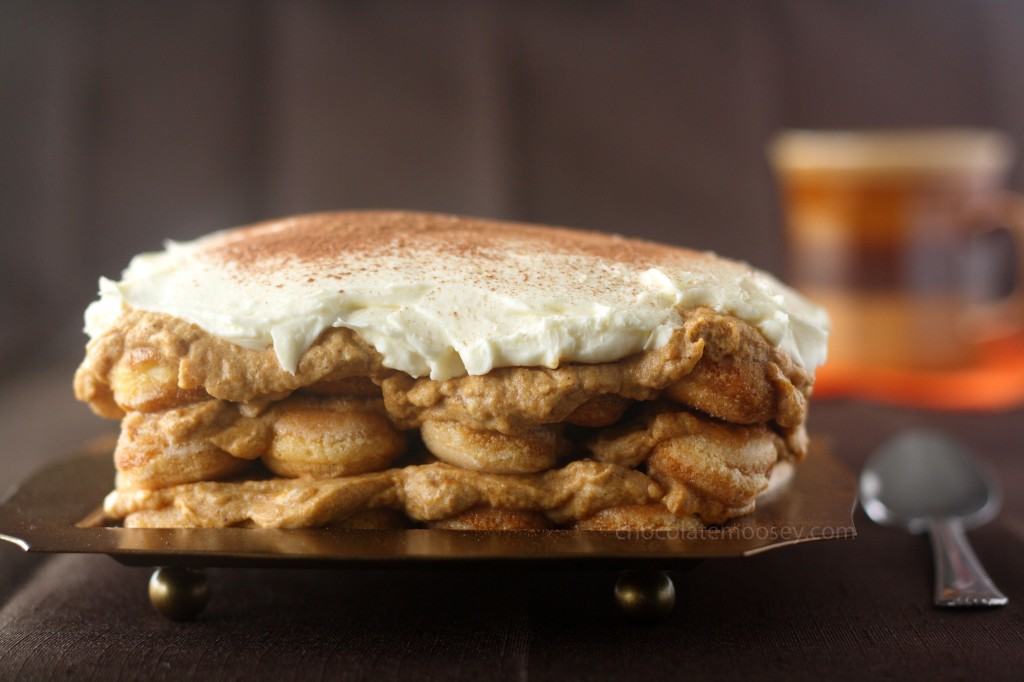 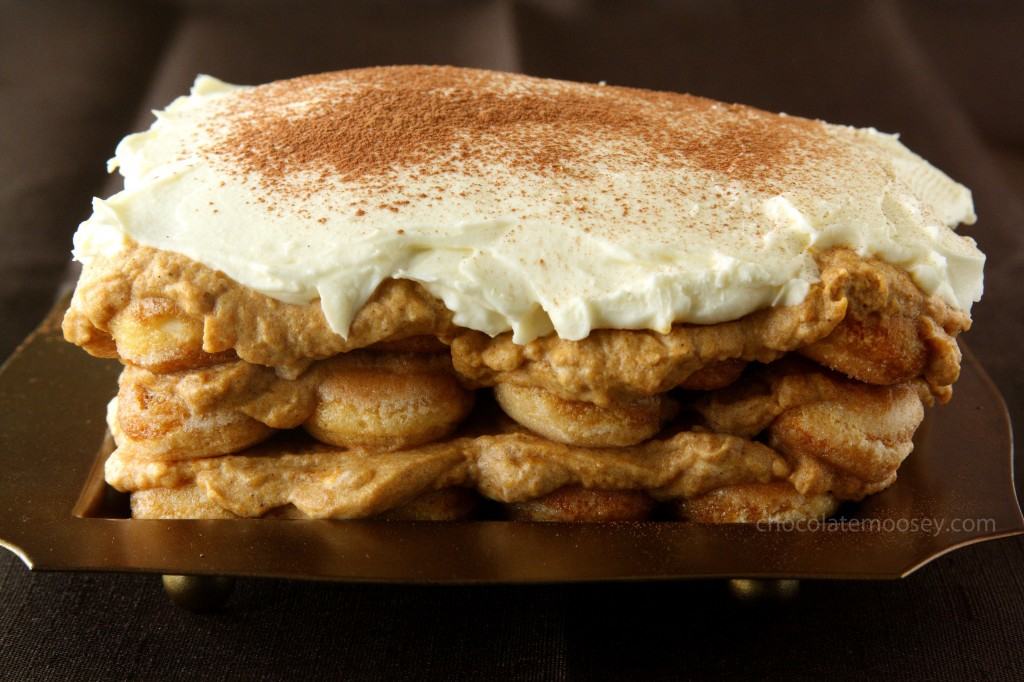 Tiramisu literally translate into “pick me up” because it contains espresso.

However, the espresso wasn’t very strong in the Pumpkin Tiramisu. In fact, the original recipe didn’t even call for it, but because I didn’t have any bourbon, I used espresso.

Soaking the ladyfingers in maple syrup and espresso before assembly allows them to soften by the time you are ready to serve. 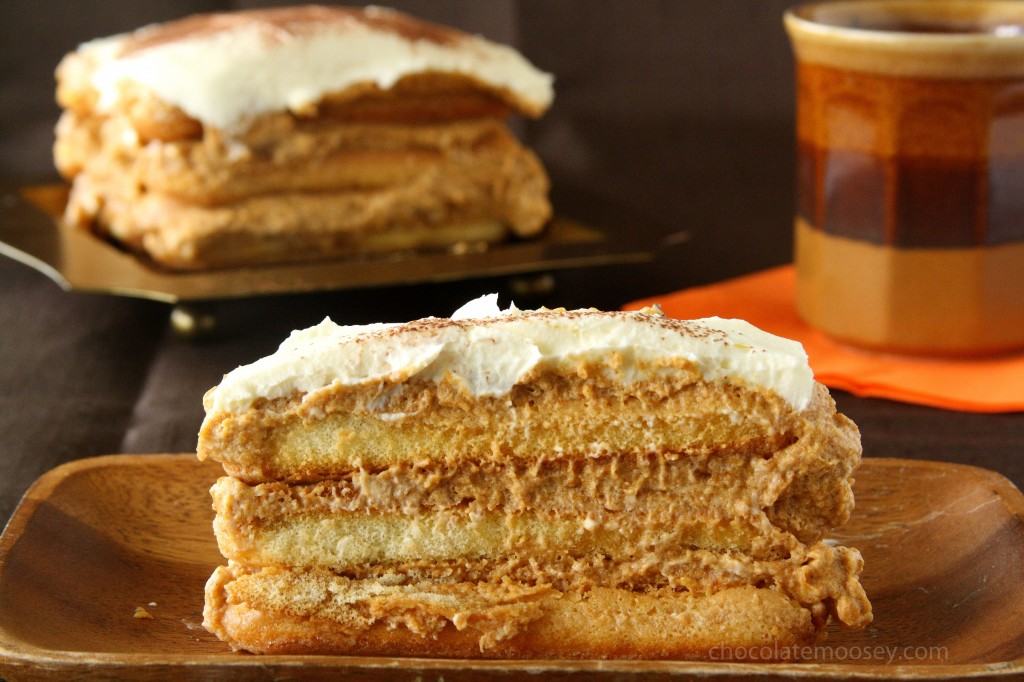 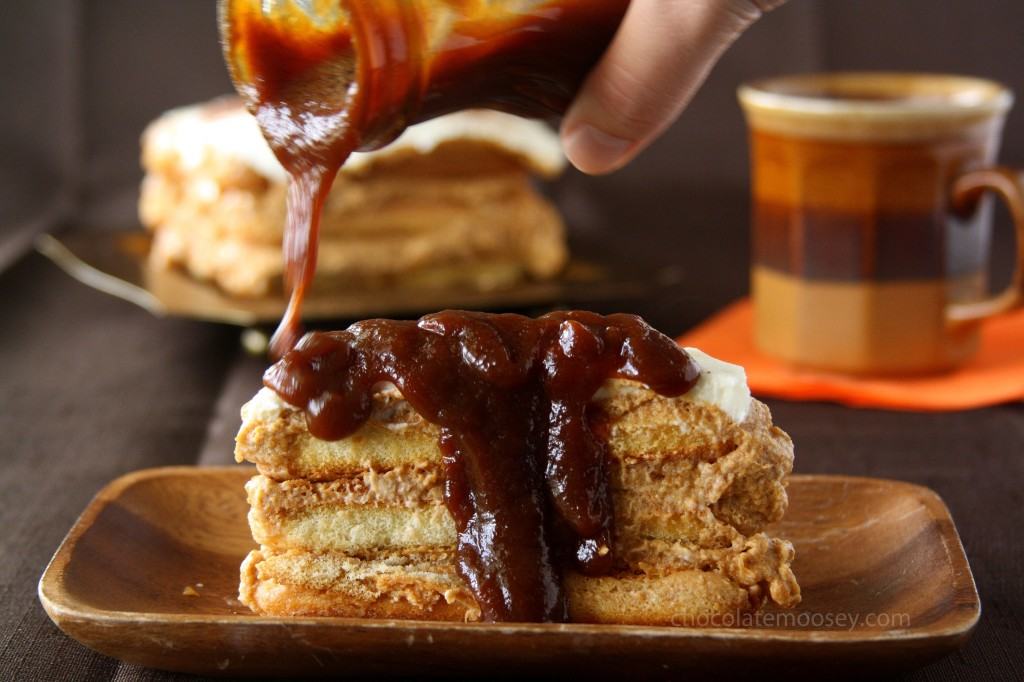 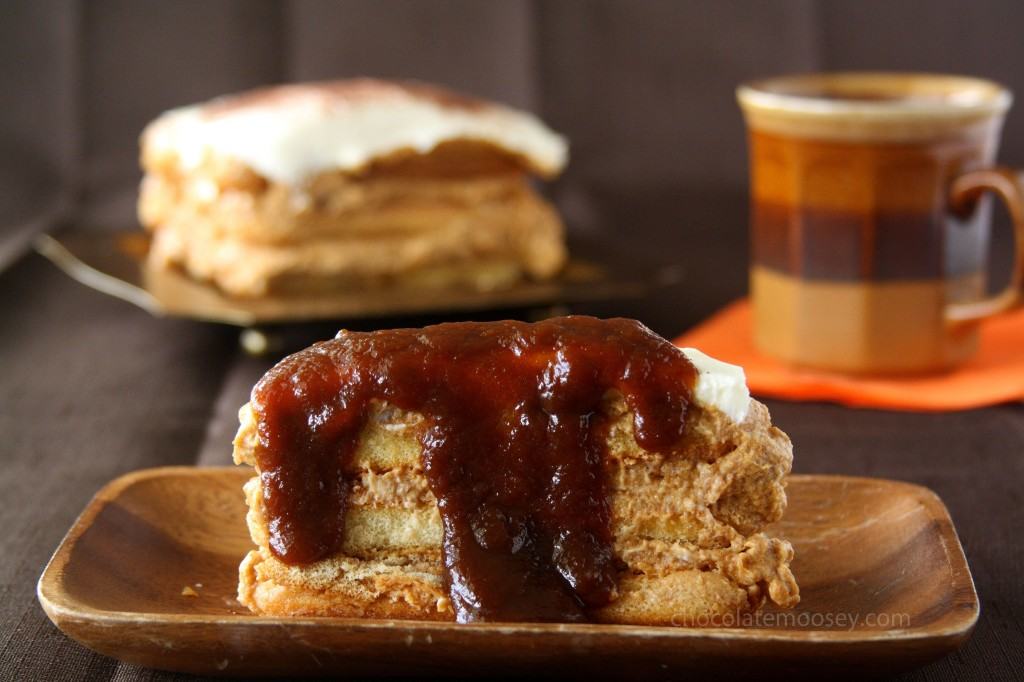 For the sauce, I took pumpkin butter and mixed it with homemade caramel sauce.

Of course I encourage making your own (which I included in the recipe), but yes you can buy caramel sauce instead (seriously, just go make homemade, ok?). 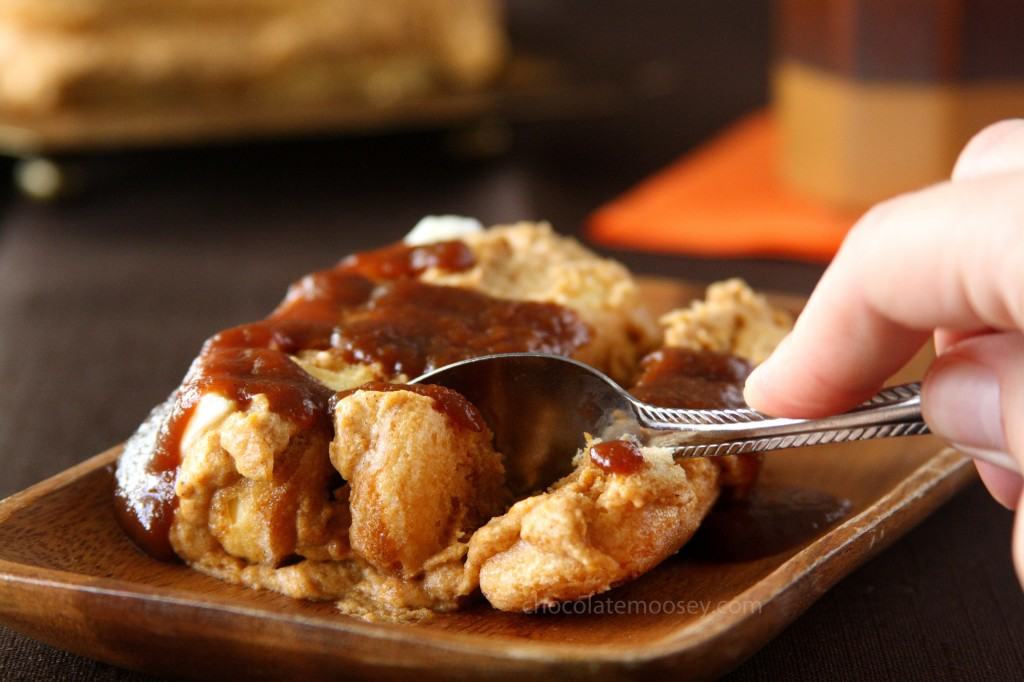 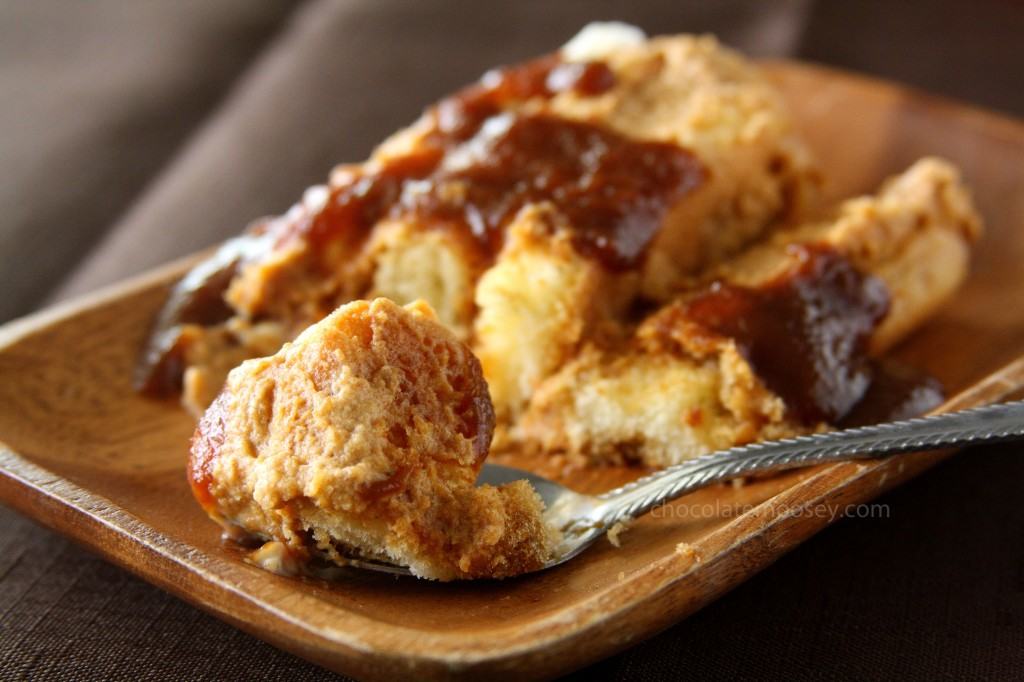 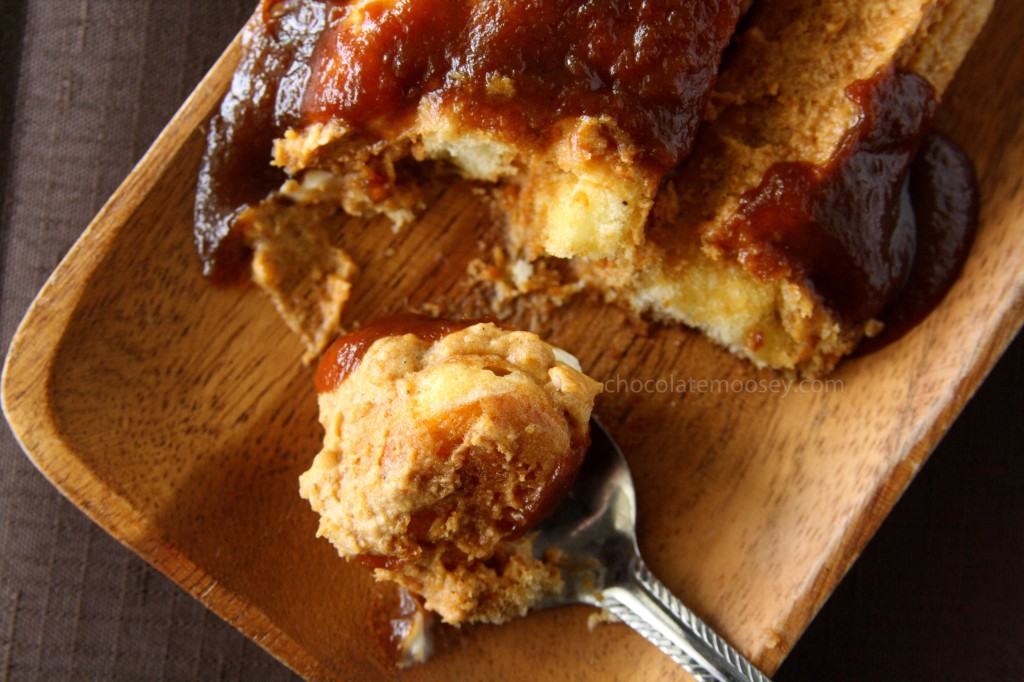 So um how does one make a pretty tiramisu? I mean look at mine. The ladyfingers on the right are sliding. I look at photographs then I look at mine and think I’m never photographing tiramisu ever again. I will, however, be making this Pumpkin Tiramisu With Pumpkin Butter Caramel Sauce again. You have the sweetness from the pumpkin filling balanced out by the tangy mascarpone topping. Dust some cocoa powder on top for some bitterness.


Source: Adapted from Taste of Home